Here's a Sneak Peek at Lululemon’s New Store For Men

Few, if any, major workout clothing brands are more closely identified with women than Lululemon, which is what makes news of the company’s plan to open a store geared exclusively to men in New York City all the more intriguing.

“We’re such a strong women’s brand,” Felix del Toro, SVP of Lululemon Men’s told TIME. “There hadn’t been the same amount of attention to who the guy was, who the guest we’re appealing to was.” (Guest, for the uninitiated, is retail-speak for customer.)

Men are most familiar with Lululemon as the maker of tight yoga pants that are designed to be flattering to the female posterior. The brand has long carried apparel for men but has remained famous primarily for the butt-enhancing tights that are its bread and butter, as it were.

And so, on roughly the day after he started working at the company, del Toro says, Lululemon started devising a men’s store. They conceived of their idealized guest: in his 30s, confident, accomplished, goal-oriented, self-assured (your proverbial “husband material,” basically).

“We call him the ‘athletic opportunist’,” del Toro says. “He’s a guy who does a variety of things, whether he’s on vacation and he’s going to pick up surfing or in the mountains going skiing for the weekend. He could be a team sport player, he could be a triathlete, he could be a marathon runner.”

Lest you, gentle male reader in his 30s, become disheartened, note that your humble 30-year-old correspondent meets just one of those criteria and still—as I learned recently when someone pointed out the brand I was unknowingly wearing—I happily own a pair of Lululemon running shorts, so there’s hope for you too. The brand clearly wants its apparel to be “aspirational”—the sort of thing someone buys, at least in part, not because they are an athletic opportunist but because they want to be one.

Lululemon wouldn’t share drawings or mockups of the store, but del Toro described its design elements, which are meant to evoke the natural beauty of the company’s hometown, Vancouver, Canada.

Located at 127 Prince St downtown Manhattan’s SoHo, the 1,600 square-foot space will have floor-to-ceiling windows, del Toro says, and a focus on concrete, wood and glass all given a weathered texture to show that “they have life.”

“The materials and aesthetic are masculine but it’s grounded in nature and it feels connected to our brand,” del Toro says.

The store will have two sound systems and two projectors, one of which can also be seen from the street. (Show Deerhunter and The Big Lebowski on a loop, Lululemon, and I guarantee you Will Not Fail.).

Del Toro wouldn’t get specific about what music will be playing at the men’s shop but says, “It’ll be a men-specific playlist.”

“If you go into any one of our stores it’s typically very upbeat and very poppy. I think the playlist for the men’s store probably won’t have a single song that’s in your average store. We’ll look at local artists,” he told TIME, “music that we think appeals to Him. Because our stores are really grounded by our female guest and the music really appeals to Her. The tone will be really different.”

Inspired by the idea of a “workshop” the store will also offer something Lululemon calls “joinery,” in which four pairs of shorts can be given customized liners. As a failed aspiring amateur woodworker, the term joinery seems like a misnomer to me here, but being able to specify the exact kind of liner in my athletic shorts feels spot-freakin-on.

Two similar locations will open in Santa Monica and Miami before the end of the year, del Toro says. The Soho location is set for an opening on Black Friday, which is my own personal iteration of hell, but if I had to spend it at a retail establishment a 1,600 foot glass cube in SoHo with “men-centric” music playing actually sounds not terrible. 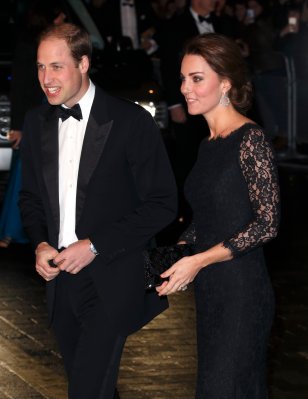 The Royals Are Coming! Will and Kate Arrive in December
Next Up: Editor's Pick