It was 2:30 in the morning on Oct. 15 when Dr. Bruce Ribner received a call from Texas Presbyterian Hospital in Dallas, asking if he could treat their nurse, Amber Vinson, for Ebola.

Ribner, medical director of Emory University Hospital’s serious communicable disease unit in Atlanta, was already spending hours a day on the phone with staffers at the Dallas hospital, remotely guiding them through their first case of Ebola, Thomas Eric Duncan. But in mid-October, Presbyterian doctors learned they now had two Ebola-positive nurses, and dozens of their staff were quarantined. They needed the doctor with a strong track record to take over.

Two weeks later, Vinson walked out of Emory’s state-of-the-art isolation unit. That put the hospital at four-for-four in Ebola-patient survival; Dr. Kent Brantly, medical aide Nancy Writebol, and another unnamed patient also survived Ebola after treatment at Emory. It helps that he and his team were ready. Indeed, having an Ebola patient in the United States was a scenario Ribner says he predicted more than 10 years ago.

“We’ve learned that we were right,” Ribner tells TIME. “You need to do an enormous amount of preparation.”

“Enormous” in this case is not an overstatement. Ribner’s staff of seven physicians were specially selected for their infectious disease expertise, their personal skills and their meticulous attention to detail. Many doctors have been turned away from the center for failing to master their protective gear. The unit was built 12 years ago in collaboration with the Centers for Disease Control and Prevention (CDC), which is headquartered down the street, as a place to treat the agency’s health care workers should they come down with something unfamiliar or highly contagious or both. It was an idea Ribner had had for a long time, suggesting it to his other bosses through the years. Emory was the first to go for it.

So they built the CDC-funded 622 sq. foot isolation unit with room for two patients, with amenities like special ventilation to keep air pressure lower inside patients’ rooms so it can’t escape if a door opens, and a pressure chamber to sterilize equipment.

And then they waited.

“Over the last several years, there were people questioning whether what I was doing was really something that had value,” says Ribner, who says he felt like Noah building an Ark for a storm no one thought was coming. Though they drilled at least two times a year, the unit only received two patients prior to 2014, and both tested negative for anything serious.

“Part of me said, ‘Gee, this is frustrating that we’ve had this open all these years and spent all these resources and we haven’t really been needed,'” he says. “But while I always wondered whether or not we’d have a real patient, I always felt that there was value in having that level of insurance. I guess it ultimately turned out I was right.”

When he was at Harvard Medical School, Ribner says he couldn’t imagine himself focusing on only one part of the body, like the heart or the lungs, and that’s what drew him to infectious diseases. “As an infectious disease specialist, you have to know everyone else’s specialty,” he says. He decided eventually to focus on hospital epidemiology, working to improve hospitals’ infection control and help think about—and prepare for—the unimaginable.

“He’s a hardworking guy,” says Dr. Herbert DuPont, Ribner’s former boss at the University of Texas School of Public Health. “Anyone can build a unit, but Ribner is the one who was interested in it and saw the need for it.” Hospital preparedness—and caution—are a running theme in Ribner’s career. And when he was setting up the Emory unit, he was adamant that the physicians be set up to take every possible precaution for their own safety—sometimes going above and beyond what leading infectious disease experts recommend.

When TIME first visited Emory in August, Ribner and his team refused to be photographed in their personal protective equipment (PPE) because it differed from what the CDC recommended for health workers treating Ebola. At the time, the CDC instructed hospitals to wear at least gloves, a gown, eye protection and a face mask; at Emory, they wear full tyvek suits with powered air purifying respirators (PAPRs). After the Dallas hospital had two nurses become infected with Ebola while following those protocols, the CDC adopted more conservative PPE recommendations.

“It’s been semi-satisfying to see our colleagues down the street gradually shift their guidelines to look awfully similar to what we’ve been doing,” Ribner says. “Quite frankly, we always felt that our position was the one we were the most comfortable with.” His former colleague at Emory Dr. David Kuhar, now a medical officer with the CDC’s division of healthcare quality promotion, told TIME: “I think [Ribner] is very sensible, very reasonable,” says Kuhar. “He’s a fantastic infectious disease physician.”

Ebola in the U.S.

“We knew we had a opportunity to do something that basically had not been done before,” he says of treating Brantly, the first American Ebola patient. “There were lots of people dealing with patients with Ebola, but never in an environment like this.”

Ebola is spread through contact with bodily fluids, and some patients at Emory have excreted multiple liters of feces in a single day, for multiple days at a time. “It’s an intensive environment and those people are pretty sick,” says Ribner. That’s why he repeatedly talks to his staff about their mental stamina, and has an Emory chaplain work closely with them. When a patient is in the unit, there’s someone with them 24/7.

When it comes to specifics about his patients, Ribner say this: “Our first patients were appalled when they came back to the U.S. and found out how much was known about them,” he says. “They had no idea what a media circus was going on in the U.S., and I respect my patients.” When he was treating the Ebola patients, Ribner says he would come home to his wife at midnight and she’d tell him his name and the hospital were all over the news. “When I come up for air every once in awhile, I’m reminded what a big deal this is in the U.S.”

Though Ribner says he has no intention of going to West Africa, he feels a responsibility to the people there. “I feel greatly for my colleagues in Africa. The bottom line is you can’t expect good outcomes when you’re dealing with patients that way,” he says. “In the process of getting our patients better, we are learning an enormous amount, which we hope to feed to our colleagues in West Africa so perhaps they can not have such high fatality rates.”

Ribner and his team have published every detail of their procedures online, as well as what they’ve learned clinically from treating patients. They most recently spent a couple of hours a day on the phone with the team at Bellevue Hospital in New York while they were treating Dr. Craig Spencer. But what they’ve really offered the U.S. is hope: proof that Ebola is not always fatal and the motivation to try to do more for patients abroad.

Ribner says his team is ready for more patients, and he’s surprised there haven’t been more in the U.S. already given the fact that the outbreak is still raging in West Africa. But he’s also looking to, and preparing for, the future. “Who knew Ebola virus was going to spread to the hideous outbreak that it is? Who knew MERS was going to come up? Who knew SARS was going to come up?” he says. “We really focus on an all-cause approach, because we know that whatever comes is likely going to be something we didn’t plan for.”

Says the man who’s planned for everything. 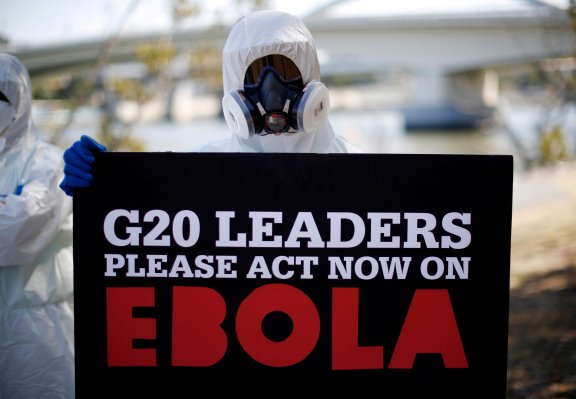 Ebola Among Top 3 Health Concerns for Americans
Next Up: Editor's Pick