Your band She & Him is releasing a covers album, Classics, on Dec. 2. What attracts you to standards?

That was how I started out–it’s actually how I learned to write music. I had a cabaret act, and I transposed all the music and I would play through all these Gershwin and Cole Porter songs. I learned so much about song structure, and it was really such a great education.

Loretta Lynn wants you to play her in a Broadway version of Coal Miner’s Daughter. Is she a role model for you?

She’s a little firecracker. She’s so true to herself, and I try to use that as a guide. It’s easy when you’re in the public eye to become overly aware of what other people think you should do and shouldn’t do. It’s too many notes.

Your show New Girl had its love interests get together and break up, and the show came back stronger than ever. Why did that work so well?

The Office was great, and I’m sure they would have survived if Jim and Pam had broken up. But in New Girl, the crux of the show was, there were these people who hadn’t figured it out. If they figured it out, then there really is no show. It’s a more modern idea of romance–the romance is between the friends.

What are the challenges of telling a love story on TV?

When these people are just dating, the idea is to throw them with lots of people. It looks like they’re dating at a speed no normal human being dates. There’s some suspension of disbelief.

Do you agree with critics who say the romantic comedy is dying in film but finding new life on television?

I don’t know if it’s dying in film–it’s in need of a reinvention. It’s such a narrow genre because it basically involves the same thing happening every time. The romantic comedy is an evolution of the screwball comedy from the 1930s, but the screwball comedy had a broader range of topics. To surprise people, you need to keep changing things up.

One hundred percent. Feeling like an outsider is part of my nature, and it’s what makes me who I am, so I think I’ll find a way to make myself feel like an outsider no matter what situation I’m in.

You dropped out of Northwestern University your freshman year after being cast in Almost Famous. Do you ever miss college?

You co-founded the women’s lifestyle site HelloGiggles. What void did it fill online?

When we started four years ago, there weren’t a lot of positive women’s communities. We put in a ton of checks and balances at the beginning to avoid people ever saying anything mean about each other. It’s strange because a lot of people are like, You can’t change human nature–people are inherently negative. I don’t think that’s true. If you expect the best of people, they’ll step up.

Last year you spoke out about why embracing femininity didn’t make you any less of a feminist. What inspired you?

There was a moment in the mid-2000s when a lot of the women in the public eye weren’t saying they were feminists, and that [bothered] me. It was stigmatized. That’s why being attacked for being feminine really ticked me off, because why can’t you be feminine and a feminist at the same time? It shouldn’t matter what I look like.

Would you play a superhero?

Yeah! I’m not against it at all. I like those movies. I think it has to be the right type–it has to have a sense of humor. 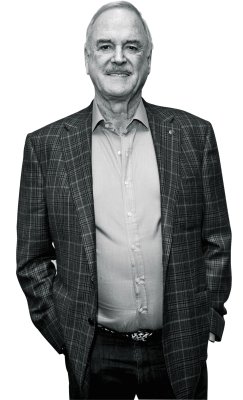 10 Questions With John Cleese
Next Up: Editor's Pick