A relative of a supporter of Egyptian ousted Islamist president Mohamed Morsi is supported as he faints outside the courthouse on March 24, 2014 in the central Egyptian city of Minya, after the court ordered the execution of 529 Morsi supporters after only two hearings.
AFP/Getty Images
By Karl Vick

With the abrupt sentencing of 529 defendants to death after a one-day mass trial that allowed no genuine defense, Egypt’s state institutions appear to be taking their cues from the terrorists they claim to be targeting. The order Monday by a judge in Upper Egypt brought condemnation from rights groups and foreign observers in terms familiar to the aftermath of a car bomb — “indiscriminate,” “mass killing,” “grotesque,” “disaster,” “exterminationist.” Legal experts scrambled to find an instance in modern history where more executions were ordered in a single go, and came up empty.

“This is way over the top and unacceptable,” Mohammed Zarei, a human rights attorney in Cairo, told the Associated Press. Egypt’s courts, he said, were turning “from a tool for achieving justice to an instrument for taking revenge.”

That has been the trend across the state apparatus since last July 3, when Egypt’s military deposed the elected government led by the Muslim Brotherhood, the insular Islamists who had failed to bring the country together following the 2011 overthrow of President Hosni Mubarak. The new government’s methods have been unapologetically blunt: 1,400 to 2,000 killed, including nearly 1,000 in August on a few blocks of the Cairo streets where Brotherhood loyalists camped out for weeks to protest the coup. The death sentences announced Monday arose from riots that broke out in response to that Cairo assault in August; protesters in Minya, 150 miles south of the capital, attacked a police station and a deputy commander was killed.

If blunt force has come to be expected in the street, however, it still stands out in a courtroom. Outraged reports from Minya took their weight from accumulation of details — the airing and discussion of which are usually the point of a trial, but that judge Said Youssef refused even to hear. The wife of one defendant, an attorney who frequently represented Brotherhood members, told Buzzfeed that phone and visitor logs showed he was in a meeting when the charges claimed he had been arrested. Another defendant was confined to a wheelchair by paralysis at the time of the disturbance.

Defense attorneys complained that they had no chance to examine investigative files running more than 3,000 pages. Only a fraction of the defendants were even present in the courtroom, where decorum deteriorated and bailiffs moved in after the judge refused to postpone proceedings so defense lawyers could read the evidence.

“The judge stood up, looked at us, put his hands on his belly and announced: Monday is the verdict,” defense attorney Yasser Zidan told AP.

The stunning sentence that followed could yet be overturned by Egypt’s Grand Mufti. But Monday’s verdict stirred international opprobrium against an Egyptian regime that has arrested 16,000 citizens, declared the Brotherhood a “terrorist organization” and jailed journalists, human rights advocates and democratic activists who had been leaders in the 2011 uprising that deposed President Hosni Mubarak. U.S. State Department Deputy Spokeswoman Marie Harf said it was “pretty shocking” that 529 people were sentenced to die for the death of one policeman and it “defies logic” that they were all tried appropriately within just two days. “There’s no place for politically motivated convictions in a country that’s moving toward democracy,” she said.

Dissent is not brooked by the current military-backed government. It pointedly refuses to draw any distinction between the Brotherhood, which historically eschews violence, and militant Islamist extremists who are waging guerrilla and terror attacks against the state in the Sinai peninsula, and occasionally on the mainland. Monday’s sentence reflected the government’s continued willingness not only to alienate Egyptians sympathetic to the Brotherhood, but label them as an enemy. “You cannot sentence 528 people to death at once,” one observer Tweeted, giving an alternate total also circulating in reports. “That is a civil war.”

The stage was set for Tuesday, when 682 more defendants are scheduled for trial, including the top Brotherhood official, Mohamed Badie, whose title is Supreme Guide. The proceedings are, once again, in Minya. 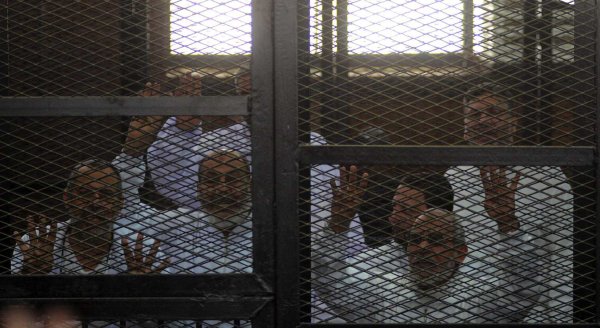 Egypt Sentences 529 Morsi Supporters to Death
Next Up: Editor's Pick