When U.S. President Barack Obama visited Burma, officially known as Myanmar, in November 2012, he found it abuzz with promise. Sanctions had been eased, political prisoners released and Rangoon hotels were teeming with foreign executives eager to harness the nation’s abundant natural resources, cheap workforce and enviable location between regional titans India and China.

So giddy was the postdictatorship atmosphere that Obama planted an agonizingly inappropriate kiss on Nobel Peace Prize winner Aung San Suu Kyi. Not that any of the traditionally conservative Burmese minded, however, because the democracy icon was finally free after 15 years of house arrest and relishing life as an elected lawmaker.

But on Wednesday, Obama returned to a very different Burma. Economic liberalization has proved woefully inadequate and human-rights abuses continue unabated. Journalists must once again muzzle their criticism or face persecution. The military continues its assaults on ethnic rebels and, as Suu Kyi said last week, the democratic transition is “stalling.”

“Progress has not come as fast as many had hoped when the transition began four years ago,” Obama told the Irrawaddy magazine before his arrival in Naypyidaw for the East Asia Summit, a meeting of the 10 Association of Southeast Asian Nations members plus other world powers including China, Russia, India and the U.S. “In some areas there has been a slowdown in reforms, and even some steps backward.”

Visitors to Burma may find this surprising. Rangoon is a cacophony of building work, and the battered death-trap taxis of yore have been replaced by Japanese and South Korean imports. Illicit money changers have been swapped for ATMs. Cellphone SIM cards are no longer restricted or prohibitively expensive, meaning the once ubiquitous phone kiosks, where ordinary Burmese queued up to pay for a few minutes’ use of a fixed-line handset, lie largely idle — an anachronism for tourist snaps.

Yet this progress is a mere facade. “Aung San Suu Kyi may say that reform has stalled, but the reality is that it has regressed,” says Khin Ohmar, coordinator of Burma Partnership, a network of civil-society organizations. Like many longtime democracy activists, she still complains of “surveillance, scrutiny, threats and intimidation.”

Burma is unusual amongst authoritarian states embarking on reform, in that the same figures who ran the previous military dictatorship remain in charge today, and so practically all changes have benefited this coterie. Foreign direct investment, for example, has been confined to the extractive industries that are the purview of tycoons with military connections.

“The changes put in place by the [President] Thein Sein administration are not, for the most part, liberal market reforms, but simply expanded permissions and concessions, often given to the crony firms that dominate parts of the economy,” says Sean Turnell, a professor and expert on Burmese economics at Australia’s Macquarie University. In fact, he adds, “protectionist and antireform sentiment is building.”

Certainly, there is no significant economic legislation pending. Foreign banks have been allowed to set up shop, but can only work with other foreigners, using foreign currency and cannot offer retail services. This means the industry remains plagued by crippling inefficiencies.

Meanwhile, some 70% of Burma’s 53 million population toil in agriculture, where there have likewise not been any meaningful reforms. Poverty, exploitation and land grabs are rife. “The economic circumstances of Myanmar’s majority rural population are now marginally worse than before the reforms were launched,” says Turnell.

The media is once again manacled. The death of noted journalist Aung Kyaw Naing in military custody last month has been the nadir of a year that has also seen 10 reporters jailed. “Obama’s got to see it as another indication of sharply deteriorating press freedoms,” says David Mathieson, senior Burma researcher for Human Rights Watch. In fact, of the 11 reformist pledges Thein Sein made to Obama back during his last visit, says Mathieson, “only about half of them have been met.”

Political reform is also backsliding. Suu Kyi will most likely romp home in next year’s national polls, provided they are as unfettered as the by-election that saw her enter the national legislature amid a landslide for her National League for Democracy party in April 2012. However, she remains constitutionally barred from the nation’s highest office. Negotiations to amend these restrictions — owing to her marriage to a Briton and sons who are foreign nationals — have broken down. Asked what the response would be should Obama try to press the issue, a Burmese government spokesman deemed constitutional reform “an internal affair.”

But it is the plight of the locally despised Rohingya Muslim population that is most pressing (not even the 69-year-old Suu Kyi has the moral fortitude to speak up for them). More than 100,000 of this wretched community fester in squalid displacement camps following attacks by radical Buddhists. They suffer restrictions on movement, marriage and education and thousands are planning to flee during the current “sailing season” on rickety boats to perceived safe havens like Malaysia, as thousands have before them. Many die every day.

However, analysts believe there is a political element to this humanitarian catastrophe. Resentment toward Muslims is a relatively recent phenomenon, with sporadic attacks on Muslim communities punctuating the past three years. Some say the unrest is being inculcated and encouraged in order to give the military continued justification for its wide-ranging powers. Government complicity in recent sectarian clashes has been alleged by the U.N. and Human Rights Watch (though furiously denied by Naypyidaw). And the tactic has been used before: anti-Muslim violence also curiously erupted amid the 1988 pro-democracy rallies.

Discontent is also brewing over myriad issues domestically: garment workers strike over pay and conditions; victims of land grabs are descending on the capital; activists protest Chinese-owned mines; farmers rally against dams that ravage the environment. But sectarian violence, or the threat of it, would be the trump card that would allow the army to suspend reforms. Military spending has already increased in absolute terms during Thein Sein’s time in office. Now there are rumors that army chief Min Aung Hlaing is maneuvering for a run at the presidency. If so, there will be precious little hope for reforming the military, which is the single greatest impediment to tackling Burma’s abysmal human-rights record.

The Rohingya crisis is a gift to Burmese generals hoping to shore up their positions and the military’s, and for that reason the Rohingya lie at the core of the Burma’s economic and political transition. Obama “is dealing with a time bomb,” says Khin Ohmar. “He may face resentment for saying something about the Rohingya, but he has to.” 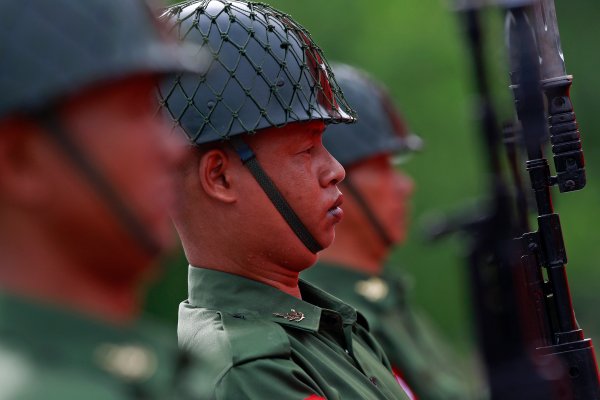 Burmese Generals Accused of War Crimes
Next Up: Editor's Pick