Tents set up by pro-democracy protesters are seen in an occupied area outside the government headquarters in Hong Kong's Admiralty district, Nov. 12, 2014.
Vincent Yu—AP
By Elizabeth Barber

“I have never seen Hong Kong this organized, this nice, this united,” says Jamie Yai, a 34-year-old flight attendant, as he watches his two small children toddle through the city’s largest protest site in the downtown Admiralty district.

The mostly student demonstrators who have been camped out here since late September have no single leader, nor are they agreed on how long to continue their occupation of three key areas of Hong Kong in their campaign to press Beijing for freer elections. The protests haven’t been without rancor or violence, either. But one would never know that from looking at the camps.

The Admiralty camp has been named Umbrella Square by the protesters after their movement’s symbol. Though nobody is in charge, Umbrella Square and the two other tent communities run as well as anything else in this city of 7.2 million. Many of the hundreds of tents have addresses, like “2 Democracy Avenue” or “Tent #22, Occupation Zone” (to which the post office actually delivered a letter). Slippers are tidily lined up beside door flaps. In the evenings, protesters pass around curries and cakes to friends and strangers. Guest lecturers, piped over a speaker system, talk about politics or whatever else they feel like.

Protesters need not bring their own residences. Pat, a graphic designer who declined to give her last name, opens registration at 8:30 p.m. each night for 100 tents in a part of Umbrella Square called the Freedom Quarter. The tents are run like a hotel—minus the maids. Checkout is at noon, and cleanliness is a must. The Freedom Quarter is consistently full on weekend nights—and even then, “they’re still coming,” Pat says.

Longer-term residents have spontaneously taken on different roles: recycling bottles and cans, tutoring high school students for the upcoming college-entrance exam or building the study areas and other amenities that are making this village a model of the sort of autonomous society that Beijing says Hong Kong is not yet ready for.

“I haven’t done this before,” says Cheng, 48, a cybercafé owner who gave just his surname, as he hammered and sawed wooden pallets that will be used to keep sleeping mats off the wet road. “But it needs doing. I just do it.”

Supply stations are overflowing with cookies and bananas. In the Organic Guerrilla Garden of Plurality, pro-democracy gardeners are growing kale and tomatoes under the watch of an alien scarecrow with alarmingly long toes. And art abounds. Leung Chun-ying, Hong Kong’s unpopular leader, has been imagined in posters as everything from a turtle to a vampire. The Umbrella Man statue—a large wooden sculpture of a figure holding an umbrella aloft—is an Instagram fixture.

Still, no one knows how much longer the camps will last. Any day now, the police are expected to enforce court injunctions to clear part of the Admiralty site and another across Victoria Harbour in the blue collar Mong Kok district, where retailer Wing So, 20, sums up the feelings of many impatient business operators. “The bus can’t come here, we can’t sell shoes,” she says, looking wearily at the tent village across from her footwear boutique. “I do not like these people.”

Government talks have stalled and the Hong Kong Federation of Students, which sometimes takes a de facto leadership role, cannot announce a next step for the street occupations because it does not have a real mandate. (Its one attempt to canvas the wishes of those camped out in Umbrella Square collapsed in disagreement over methodology and ended with federation leaders bowing to protesters in apology.) This is the political quandary in which the leaderless demonstrators now find themselves. Some, like Kel Lee, 23, believe “we should take the occupation to another level.” Others, says Ming Sing, professor of politics at the Hong Kong University of Science and Technology, will start leaving “as they feel the pinch of public opinion. The protests have become much more polarized.” 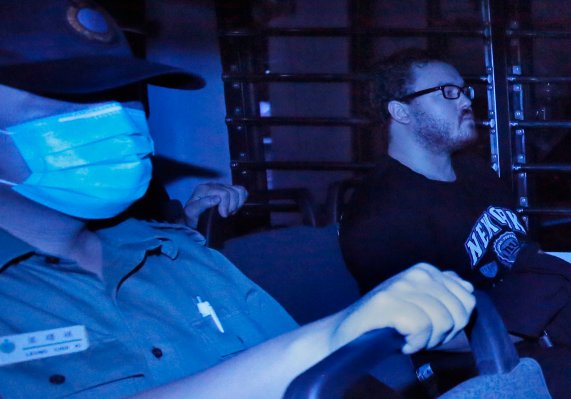 Hong Kong Murders: Banker to Have Psychiatric Exam
Next Up: Editor's Pick