The most glamorous Black Eyed Pea is back with a new solo single, “L.A. Love (La La),” a new album (coming next year) and a new role working with the Hetrick-Martin Institute, which offers a variety of services to at-risk LGBTQ youth. TIME caught up with the pop star to talk about her return to pop music, Iggy Azalea comparisons and life as a new mom.

TIME: Your last album, The Dutchess, came out in 2006. How has pop music changed since then?
Fergie: There are definitely more boundaries pushed nowadays because of the Internet and social networking and the level of shock value that we’re accustomed to. We’re allowed to get away with a bit more, which I embrace and love.

Pop culture changes so quickly — do you look back at the mid-2000s and think, yikes, that didn’t age so well?
Yeah, but I’m not one to sit there and live inside of a memory book. I’ll take a glance at it and have a good laugh and a good cry and stay in the present.

Then let’s do that!
When I say the lyric “Just got to New York like a net on a jet,” a lot of people didn’t realize I was talking about the basketball team! It’s not like, a girl named Annette.

Does this happen a lot? People mishearing your lyrics?
Yeah. In “Big Girls Don’t Cry” I was going back to when I was a little girl, and I say, “We’ll play jacks and Uno cards.” You know jacks with the ball and those little metallic toy items that you throw? It’s a vintage game.

I am familiar.
A lot of people thought I was saying, “We’ll play Jackson Uno cards,” like some friend named Jackson! Which happens to be my step-dad’s name. But I was actually saying the vintage game!

Speaking of lyrics — have you forgiven will.i.am for spelling tasty with an E on “Fergalicious”?
That was perfect. I called him on it right away, but then he was like, “No, let’s spell it wrong on purpose! It’s great! It’s better!” It messes it up a little bit. I don’t like anything that’s too perfect.

Some critics compared “L.A. Love” to Iggy Azalea’s “Fancy,” but you were doing the singsongy raps in the mid-2000s. Do you think you influenced her?
I don’t know, I’ve always done the style that I love, that I’ve been a fan of, and as long as it’s true to me and organic, I feel like people can feel that. If other people have said that, then it is quite the compliment. I love girls stepping outside of the box and doing something that’s unexpected of them. That’s what I’m all about.

You’re making your comeback performance at the American Music Awards later this month. You nervous?
What good is a rollercoaster if you don’t get those butterflies in your stomach? You just fight through it and let it fuel the energy.

You shout-out a lot of different cities in “L.A. Love.” How’s traveling the world and being a new mom [to Axl Jack Duhamel]?
It’s interesting — at this age he does not like to go to sleep easily on planes because it’s very exciting for him. He just wants to talk to everybody and say hi to everybody.

What’s it like having a 1-year-old around while you record songs for the club?
I record some stuff at home, so he comes in, and I have dance rehearsals here. I have a dance studio.

Ah — bring the people to you.
It’s great! I can just walk in the other room and see Axl. It’s awesome. Daddy [Josh Duhamel] brings him in when I’m doing dance rehearsals, and we stop and we have an Axl dancing moment.

Last year you threw vogue balls to raise money for AIDS organizations. Have you taught him to vogue?
The hand movements are too intricate for him right now.

Maybe when he’s older.
I do stretch him. I go “streeeeetch” and I put his legs up, and that’s definitely inspired by all the contortionists and amazing voguers who stretch every single day. I’m making sure that Axl is nice and limber.

He can be like those child dancers in old Missy Elliott videos.
I know! He’s ready to come to dance class, so why not?

The Hetrick-Martin Institute, which provides services to at-risk LGBTQ youth, is honoring you at their Emery Awards gala on Nov. 12. How did you get involved with their cause?
I went through a period in my life where I had earned money as a child actor, lost it all, went through dark periods in my life, got in debt, paid it off and had to start from ground zero. Nothing in the account. I had nowhere to live. No money to pay for food. Nothing. Nowhere to put my stuff. Where do I go now? My mom, who is an angel, let me come live with her and helped me mentally get my life back together. She gave me the shelter I needed and let me eat her food and gave me the mental support to help get a new chance at life.

Had I not had my beautiful mom, Terri, there for me to do that, where would I have lived? What would I have done? Not everybody has a Terri. What this group does, the Hetrick-Martin Institute, is such a beautiful thing, because they provide shelter, clothing, showers, HIV testing, SAT preparation, job readiness — all of these things for people who have been living in hostile environments and want to move forward in life but don’t have a Terri. This is their angel.

With marriage equality having such a banner year in 2014, do you think more urgent services like these, ones that address health and homelessness for LGBTQ people, get underlooked?
Yeah. Now is a great time to bring awareness to the LGBTQ community because people are becoming more accepting. We have a long way to go, but at least new steps are being taken. And it’s important to address the youth in this group especially. It’s such a crucial time in one’s life. When you’re younger, you definitely come to a lot of crossroads in your life. I know, having gay, lesbian and transgender friends who have really faced struggles as far as being discriminated against. They can’t help it, that’s how they’re born, what their feelings are. It’s really important that there are places like this. 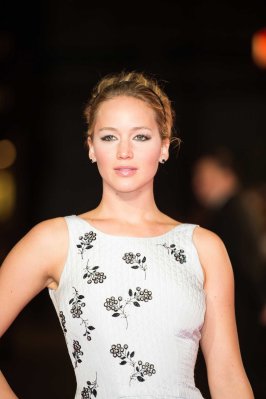 J-Law Cut Her Cameo in Dumb and Dumber To
Next Up: Editor's Pick