Last week’s Republican victories may have had the paradoxical effect of increasing the influence of the consummate Congressional Democrat, Joe Biden. GOP leaders looking to show they can get things done now that control both the House and Senate will need to cut deals with the Obama White House, and Vice President Joe Biden may be their best hope to do so.

On Tuesday, TIME spoke with one of the closest observers of Biden’s negotiating tactics, his long-time sparring partner and former House Majority Leader, Eric Cantor, now vice chairman and at the investment bank Moelis & Company. As the number two Republican in the House for the first six years of the Obama administration, and a constant thorn in the side of the White House on issues like the budget, energy, immigration and health care, Cantor saw Biden’s techniques up close.

You’ve spent a lot of time negotiating with Vice President Biden. What was that like?

Cantor: Unquestionably, the Vice President knows how to negotiate. He understands people. And in my professional background, before I got to Congress and certainly now in the private world at Moelis & Company and in Congress, if you’re interested in doing deals, and getting a result, what I think what one needs to do is be able to size people up. And this is what Joe Biden has always been about in my experience. He is able to size up where the opposition is. He’s firmly rooted in his direction, what he needs to accomplish in the negotiations, and then understands how far you can push and not lose a result or a deal.

My real experience is from the extended time we spent together in the summer of 2011 around the debt ceiling discussions. As you recall, the Speaker had asked me to serve on the Biden commission. The President had basically formed it and put the Vice President in charge. And there were a handful of us in the room for seven weeks almost, three days a week, two and a half hours a day. And the Vice president was the only one, and that commission was the only entity that really came up with a list of spending reductions that both sides could agree to.

Now, he would always say nothing was agreed to unless everything is agreed to. But nonetheless, work was done in the granularity of the programs that were targeted. Nothing was ever agreed to universally because the tax question came up and that’s what kicked it back to the White House and we all had to come back to the White House for two weeks with the President and then ultimately that ended with the Super Committee creation. But if you look at what has transpired since then, the Super Committee, the fiscal cliff, Murray-Ryan, all of that, the work that came out of Joe Biden’s commission is the common theme. And I believe that is attributable to his negotiating skills and ability to cut through—to set aside what you don’t agree on and try to come to a result.

What was the difference in negotiating with the President compared to the Vice President:

Cantor: I just think that the President obviously doesn’t have the tenure in Washington in negotiating deals that the Vice President’s had. Just in terms of pure time. And I think that the President is very rooted in what he wants. The President also, in my view, is very rooted in what he thinks the other side wants. And that’s where the difficulty in my opinion has been with the President over the last six years. If one does not agree with the President’s view of what you want, there’s very little prospect for a result. Joe Biden has a real sensitivity, not only to human reaction, but also partisan and political sensitivities. He understands how far you can push before you just blow up the prospects for a deal.

One readout of last week’s White House meeting suggested that the Vice President got ahead of Obama’s position on immigration reform in a desire to cut a deal. Have you seen that happen before?

Cantor: Honestly, the whole sense of the discussion around the initial debt ceiling talks in 2011 was just that. The president had dispatched the Vice President to come up with areas that could become part of a larger deal. And really the Vice President was very clear and never hid anything from me. He said in order to get any of the kinds of things we’re discussing, the President is going to want some kind of revenue increase. He laid it all out on the table. ‘That’s what we need.’ And I indicated what we needed and that we couldn’t go for tax increases. So I think there has certainly been evidence that the Vice President is a negotiator, he wants to cut through and get a deal done.

I think that on the fiscal cliff deal, when he struck that agreement with McConnell, that was the last time that the President wanted Joe Biden involved. And this is unfortunately what the pattern has been. Hopefully, I think the President may see the light and say if you want to get a deal done, bring in the deal man, Joe Biden.

What’s the current state of the Biden-McConnell relationship?

Cantor: I can’t speak for McConnell. But I do… stay in touch with [Biden]. He stays in touch with people. Part of the ability to do deals is to know both sides and to understand their thought process and their political priorities and imperatives. My sense would be, if I’m like others, Joe Biden has maintained those relationships. And that’s one of the striking differences between the President and Vice President. The President has not spent the time necessary even while he’s been in office the last six years, much less before, developing, nurturing relationships and understanding people’s thinking. And that is a huge impediment to the President’s ability to do a deal, whereas I think Joe Biden has been schooled in that way.

How did you try to square the Vice President’s public image with his negotiating record?

Cantor: Joe Biden is what you see. You know, he’s genuine. Yes, he’s prone to gaffes publicly, and he’ll admit that. He’s very self-deprecating like that. And I’m certainly not one who agrees with Joe Biden on all things—we probably disagree more than we agree—but from a human and relationship standpoint, the guy’s awesome.

Do you think the midterms opened up the possibility for deal-making?

Cantor: I really think that there’s going to be a trial period here. And I really look at the next six weeks as that. From the White House standpoint, if the president signs an executive order on immigration unilaterally that will not bode well for the productivity of the next Congress. Again, I think that’s the trial issue for the president.

From Congress’ standpoint, their job is to get done the omnibus/minibus spending package. Because if they kick the can and decide to push the [longer-term spending bill] into the next Congress so they don’t have to “negotiate” with the other side, I think that leaves wide open the chance of mischief and derailing of the path to productivity.

Do you think last week’s election paved the way for a more united GOP conference, or will leadership still have difficulty keeping members in line.

Cantor: In my experience, I think the latter would probably be [a more likely] reality. And it’s always going to be a challenge for leadership. I do think in the House, the Speaker and the Leader are going to have a much larger majority now that hopefully will be more inclined to follow the path laid out by the Speaker and the leadership. If we can see the House and Senate to really begin to move legislation across the floor—and some of the legislation and probably a lot of it will not be to the White House’s liking—there’s something about that that may lend itself to a more espirit de corps, if you will, for folks to hang together because they’re winning, they’re getting legislation across the floor, they’re getting it out of Congress, sending it to the President’s desk and then it would be incumbent on the President to respond.

I think if you can see some real legislative productivity on the Hill that may lend itself to the larger majorities now hanging with leadership more. 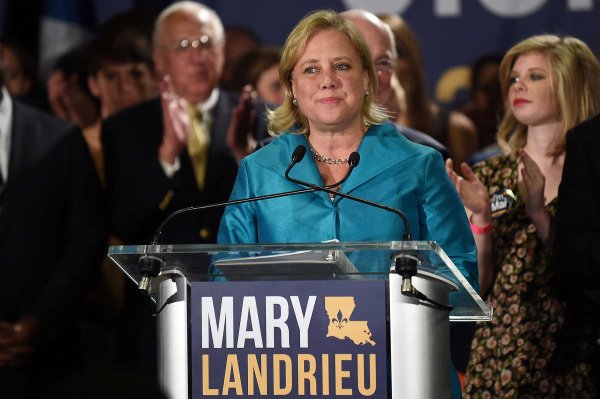 Mary Landrieu Talks to TIME About the Fight of Her Political Life
Next Up: Editor's Pick