The family of the first patient diagnosed with Ebola in the United States announced Wednesday that a settlement had been reached with the Dallas hospital that treated him before his death.

The deal with Texas Health Presbyterian Hospital was “as good or better than we would have done in court,” Les Weisbrod, a lawyer for the family of Thomas Eric Duncan, said at a news conference.

Medical malpractice suits in Texas have an upper liability limit of $250,000 for a claimant. If the Duncan family had taken the hospital to court, it would have had to reach a very high legal bar, proving the hospital knew its staff was causing harm when they treated Duncan.

Staffers at Texas Health Presbyterian had originally sent Duncan home after he went to the emergency room, even though he had a fever and was recently in Liberia, among the three hardest-hit nations in an outbreak that has killed more than 5,000 people. He died Oct. 8; two nurses who were a part of Duncan’s medical team would later contract Ebola but, after treatment elsewhere, be declared virus-free.

The hospital has also agreed to create a foundation in Duncan’s name to fund the construction of a facility to combat Ebola in Liberia. The fund will be administered by one of the existing foundations of Texas Health Resources, and the family said it is seeking contributions.

“I can never replace Thomas Eric Duncan, but we can make sure that we make this better for everyone else,” said Josephus Weeks, Duncan’s nephew. 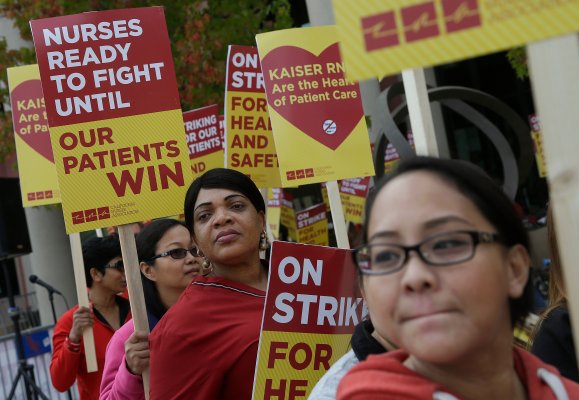 California Nurses Strike Over Ebola Preparedness
Next Up: Editor's Pick