Pedestrians cross the street in front of the Macy's Inc. flagship store in New York City on Aug. 6, 2014.
Bloomberg—Bloomberg via Getty Images
By Fortune / John Kell

Macy’s reported a 23% jump in third-quarter net income as the department-store operator trimmed expenses, helping to offset a surprising drop in sales. Here’s what you need to know about the latest earnings report.

What you need to know: Macy’s reported weaker sales for the quarter ending Nov. 1, even though Wall Street analysts had anticipated growth. Comparable-store sales, a key retail metric, fell 1.4%. Analysts surveyed by Consensus Metrix had projected a 1.9% increase. Meanwhile, total sales slipped a worse-than-expected 1.3% to $6.2 billion. The weak performance for the quarter led Macy’s to trim its sales and profitability targets for the current fiscal year, though the retailer struck a positive tone about the upcoming holiday season, in part lauding its merchandise assortment.

Macy’s isn’t the only department store suffering from poor sales trends. Sales at department stores slid 2.5% in the first nine months of 2014 from the year-ago period, according to the Commerce Department.

The big number: Profitability for the period was far better than Wall Street had anticipated, with per-share earnings rising 30% to 61 cents from a year ago (analysts had anticipated a 50-cent profit). CEO Terry Lundgren said profitability was bolstered by trimming overhead costs, as well as Macy’s ability to maintain a flat gross margin.

What you might have missed: The winter hasn’t even begun, but the word “weather” has already made an appearance in Macy’s earnings statement. A ton of retailers, including Macy’s, complained about poor winter weather last year and how it hurt sales trends. But on Wednesday, Macy’s seems to think weather will be less of a factor. “We are poised to capitalize on a return to more normalized weather patterns after the unusually severe snowstorms in the fourth quarter last year,” Lundgren said. The better weather is one of several factors Lundgren believes will help Macy’s perform well during the critical holiday season. 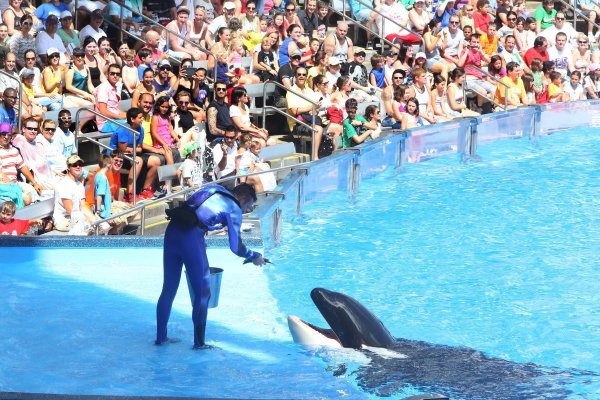 SeaWorld Continues to Flounder
Next Up: Editor's Pick