You know it’s Oscar season when you see a slew of new movies based on true stories whose resolutions you can find in three seconds on Wikipedia. Last week The Theory of Everything offered a history of the marriage of Stephen and Jane Hawking. In a fortnight, Benedict Cumberbatch will star as another Cambridge mathematician, Alan Turing, in the World War II spy saga The Imitation Game. This week Foxcatcher, which depicts the fatal meeting of Olympic wrestler Dave Schultz and zillionaire John du Pont, goes up against Rosewater, documenting the brutal interrogation of journalist Maziar Bahari in an Iranian jail just after the June 2009 election. Of all of these worthy bio-pics, Jon Stewart’s movie is the one that admits a saving sense of humor and proportion to the ordeals of its real-life protagonist.

You may recall the Iranian citizens’ plangent protests against the “landslide victory” of Mahmoud Ahmadinejad over the challenger Mir-Hossein Mousavi. The story had everything: peaceful masses colliding with the political-religious complex, 21st-century gadgets like Twitter used to defy a medieval regime and the image of a gorgeous martyr in Neda Agha-Soltan. The uprising saturated cable news for a week — until Michael Jackson died. Instantly, like a Pixar dog distracted by a squirrel, the networks forgot about Iran and went all Jacko, all the time.

One of the incidental atrocities of the Islamic Republic that year was its imprisoning of Bahari. Born in Iran, schooled in Canada, based in London and covering the Iranian election for Newsweek, Bahari committed the crime of sitting for a Teheran interview for Jason Jones of The Daily Show With Jon Stewart. Jones, posing preposterously as an American spy, asked the London-based Bahari, “Are you a terrorist?” Bahari: “No.” Jones, smugly: “That sounds like something a terrorist would say.”

In a location piece at the time, Jones explained, “We’re not making fun [of the Iranians]. We’re kind of being ironic.” In the film, when Bahari is shown the Daily Show piece by his captors, he says, “It’s supposed to be funny,” adding sensibly, “Why would a spy have a TV show?” But irony is something that gets lost in translation from the satirists in a democracy to the enforcers in a theocracy. Recall D.H. Lawrence’s observation that “What is pornography to one man is the laughter of genius to another.” To Bahari’s interrogator Jabadi (Kim Bodnia), nicknamed Rosewater for the cologne he wears, the straight-faced laughter of Jones and Stewart is the I-know-it-when-I-see-it obscenity of sedition. Pornography is Jabadi’s word for the DVDs of The Sopranos and Pier Paolo Pasolini’s Teorema that he finds among Bahari’s effects. And the Daily Show interview surely proves that Bahari is working for “CIA, MI6, Mossad, Newsweek” — as if three spy agencies were indistinguishable from a newsmagazine.

“For Lubitsch,” critic Andrew Sarris famously wrote of director Ernst Lubitsch’s 1942 anti-Nazi farce To Be or Not to Be, “it was sufficient to say that Hitler had bad manners, and no evil was then inconceivable.” For Stewart, it was enough to say the Iranians can’t take a joke. Well, not quite enough for the TV host to spend the summer of 2013 making a movie of Bahari’s 2011 memoir Then They Came for Me. Stewart felt chagrined, and perhaps a tad culpable, that the facetious interview Bahari gave Jones contributed to his imprisonment. (The Egyptian TV comedian Bassem Youssef endured the cancellation of his Daily Show-inspired program after Stewart and 60 Minutes highlighted him.) So you may consider Rosewater an elaborate make-good for that transgression.

More important, the first time adaptor-director has created a fine film with few surprises but a genuine grasp of the director’s craft. Shot in Jordan by ace indie cinematographer Bobby Bukowski (The Messenger, The Iceman), the movie has a sharp grasp of time and place, as Maziar navigates the clogged streets of Teheran on the bike of his friendly driver Davood (Dimitri Leonidas) and listens to the voices of peaceful insurrection. Staying with his fierce, saintly mother Mollojoon (Shohreh Aghdashloo), he is haunted by the ghosts of his father Akbar (Haluk Bilginer), a prisoner of the Shah in 1953, and his sister Maryam (Golshifteh Farahani), tortured by the Ayatollah’s minions; their faces are projected on walls and shop windows as Davood speeds Maziar through the city.

Undergoing Jabadi’s ham-fisted interrogation, Maziar manages to retain his sense of the absurd, as if realizing that Kafka wrote bleak black comedy about humankind’s awful unfairness. Ties to his family (in imaginary conversations with his dead dad) and to Western culture (as he moves to Leonard Cohen’s “Dance Me to the End of Love”) both flirt with derangement and keep him sane. Getting into the spirit of his imprisonment, Maziar toys with his captor’s ignorance of the U.S. by inventing insidious tales of New Jersey massage parlors. The torture victim can play mean tricks too.

You may quibble with the international caste of Stewart’s casting: the Mexican García Bernal as Bahari, the Danish Bodnia (from Nicolas Winding Refn’s Pusher) as his chief interrogator, the Anglo-Greek Leonidas his driver and the Turkish Bilginer (star of this year’s Cannes prize-winner Winter Sleep) as his father. Only Aghdashloo, an Oscar nominee for House of Sand and Fog, and Farahani are native Iranians. Do all foreigners, or Farahanis, look alike? That question matters less, given the strong and expertly judged performances all around — especially García Bernal’s nuanced juggling act of anger and anguish, hope and despair.

The virtue of this movie is its commitment to political ambiguity and emotional truth. If you expect a Jon Stewart film to sputter with cogent rage, as Stewart often does on TV, you will be disappointed. This film could be the work of Stewart’s more serious alter ego, Jonathan Stuart Leibowitz (his real name). Though not really a comedy, Rosewater is a demonstration of the creed behind The Daily Show: belief in the crucial need for impious wit against entrenched power. The freedom of the press is also the freedom to depress, and to inspire. That’s a message that can outlive any Oscar season. It would be nice if it could also overcome any regime. 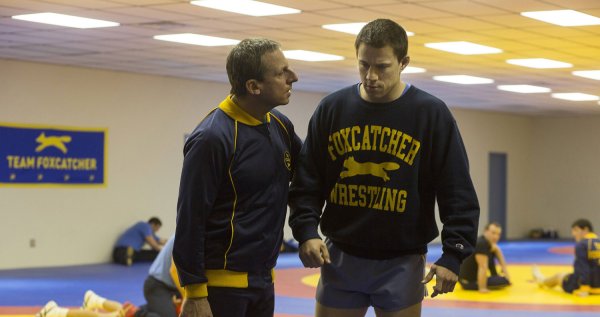