When One Twin is More Academically Gifted

Splitting up twins in school is never easy. But splitting up twins so that one goes on the advanced learning track and the other follows the regular program is one of the most agonizing decisions a parent can face. And no amount of Internet searches will give you helpful advice. The consensus: Figure it out, parents. That’s what you’re (not) paid for.

As you may have guessed, I have twins, a boy and a girl, and they’re in the first grade. I happen to be a fraternal twin myself, so I’m sensitive to always being compared to a sibling. My son is like his engineer father —completely committed to being a lovable nerd. The other day he found a book of math problems at Barnes and Noble and was so excited it was as if Santa arrived, handed him a gift, and then let him ride a reindeer. My daughter is like her freelance writer mother – studying is not really her thing. She reminds me of the prince in Monty Python and the Holy Grail who is to inherit a large amount of land and says, “But I don’t want any of that. I’d rather sing!” That’s my girl.

We were first introduced to our school’s Spectrum (advanced learning) program last year in Seattle, Washington at the beginning of kindergarten. The kids could be tested that year and would enter the program—or not—in first grade. I hadn’t really thought about whether to have my kids tested. Other parents apparently had. One asked: “Should we have our child practice at home with the same kind of mouse they’re going to use in the test?”

In the beginning, my husband and I laughed at the idea of advanced learning in the first grade. We joked about “Level Two Crayons” and “Expert Alphabet.” But then, as the day to decide about testing came closer, we started hearing from our son’s teacher about how gifted he was. What first grader wants to practice math and reading on his own during the evenings and weekends? My son. And then there was my daughter, who was right on track, but, like most kids her age, was happy to leave school stuff at school. “Let’s just get them both tested and see what happens,” I said.

As far as my kids knew, they were just going to school to talk about what they know and what they don’t. They were never told that the results of the test had any sort of consequences and weren’t the least bit curious. But when we got the results–my son tested into the advanced program and my daughter didn’t–I immediately became anxious. I wanted to let my son move into the advanced program because I knew he would love it and thrive. But I worried for my vibrant, passionate daughter who at the age of six doesn’t think she has any limits. How was I going to separate her from her brother because he could do something better?

As a child I never felt smart enough. Not because of my twin sister, but because of my mother, who was brilliant. She used her intelligence to get off of the Kentucky farm where she grew up and into a New York City law firm. She placed a lot of value on the power of education and what good grades could do. I felt perpetually unable to meet her high expectations. Now I had a daughter who, in kindergarten, was already resistant to doing her reading homework. I was terrified that placing her brother in a higher academic track would affect my daughter’s self-esteem.

I contacted Christina Baglivi Tingloff from the site Talk About Twins. She’s a mother of adult twins and author of six books, including Double Duty and Parenting School-Age Twins and Multiples. “It’s tough when twins differ in abilities,” she says, “and I’d say that it’s the biggest challenge of parenting multiples. [But] kids take their cues from their parents. If you make this a non-issue in your household, I think your kids will follow suit.”

My husband and I have no lofty goals for our kids besides wanting them to be able to pay their own bills, not hurt themselves or anyone else, and be happy. “So many parents of twins try to even the playing field,” says Tingloff. “In my opinion, that’s a bad course of action because…kids then never develop a strong emotional backbone. Your job as a parent is to help them deal with the disappointments in life.”

We ended up putting our son in the Spectrum program and our daughter in the regular learning track. In the years to come, I will make sure that they understand that advanced or regular doesn’t mean better or worse, it just means different. I want both of my children to do the best they can, whether that means taking advanced classes or singing the hell out of the school musical.

When my daughter wanders through the house making up her own songs and singing at the top of her voice, I support her…most of the time. “Really encourage your daughter in the arts,” says Tingloff. “Find her spotlight. At some point her brother will look at her accomplishments and say, ‘Wow, I can’t do that.'” While I had been worrying all this time about my daughter feeling outshined by her brother, I had never considered that he might also feel outperformed by her.

Despite all of my talk about how my daughter’s interests were every bit as valid as her brother’s, I had not been treating them the same. I saw the dance and drama as diversions and hobbies. I never gave those talents the respect that I gave to her brother’s academic interests.

Now that I am more aware of how I have been valuing their different strengths, I’ll be able to give my daughter’s interests the same amount of focus and praise as her brother’s. Hopefully, I can assure them that our only concern is their happiness. Then my husband and son can go do math problems together, and take things apart to see how they work, and my daughter and I will lay on the grass and find shapes in the clouds while we wonder about the world and sing.

The truth is, both my kids are gifted. 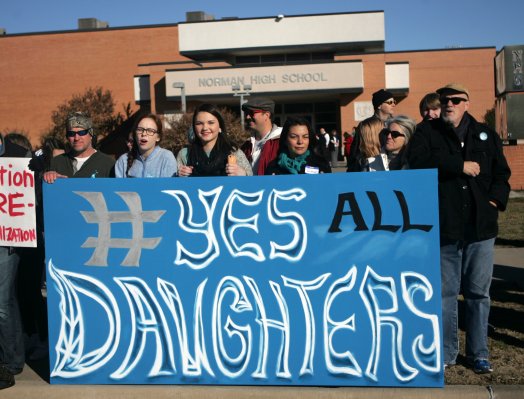