LG Unveils a 'Smart' Light Bulb You Control with Your Phone

It looks like South Korea-based electronics conglomerate LG is getting into the “smart” bulb game, announcing on its Korean site what it calls an “LG Smart Lamp”: a light bulb that has both Wi-Fi and Bluetooth built in, and that you can control with an iPhone or Android device.

Whether it’s smart or not is debatable — “smart” to me implies intrinsic automation of some sort — but giving you the option to interface with an otherwise dumb light source, no strings attached, opens up a range of smarter usage possibilities. LG says the bulbs will run 35,000 won, or about $32.

Imagine using an app like this to control when your lights turn on or off, regulating brightness settings to conserve energy (LG claims the bulbs are 80% more efficient than incandescents and should last for 10 years if used five hours a day), or being able to keep tabs on precisely how many watts you’re expending over a given amount of time. And since LG supports it on the Android version of its app, imagine using the technology as a party adjunct: it can flash to the beat of music (rhythmically reliable dance music, that is — throw some Ornette Coleman at it and all bets are off).

Now imagine — and I’m thinking outside of LG’s box here — the app interfacing with a meteorological one capable of adjusting when the lights turn on or off and how they cycle up, luminosity-wise, according to seasonal metrics like when sunset or sunrise occur. Imagine the bulbs taking their cues from local data, whether from light sensors or local weather stations, reacting to a gloomy day in a home with few windows by keeping lights in designated areas on.

We’ve been able to do some of that for decades using hardware-based timers, but they’re comparably crude: they have to be manually set using cheap, plasticky dials, you need separate ones for each outlet and your lights are either on or off — workable if you want to set up a light source to dissuade burglars or automate a holiday decoration, but that’s about it.

Wireless light bulbs aren’t unheard of: a company called LIFX (it launched last year) offers a Wi-Fi-enabled LED bulb that also supports smartphone controls, including the option to change the bulb’s color on demand. LG’s entry is significant because of the manufacturer’s international market presence, thought it’s not clear when we’ll see the bulbs stateside: at this point, they’re only available in South Korea. 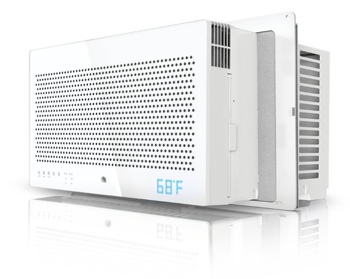 Aros Smart Window Air Conditioner Is Controlled by Your Smartphone
Next Up: Editor's Pick