Europe Has a Jihadi Superhighway Problem

Foreign fighters headed to the Middle East are not deterred by U.S. bombing in Syria and Iraq. According to recent reports, 1,000 fighters from countries across the globe are pouring into the conflict zone each month to fight with ISIS and other fanatics, adding to the 16,000 already estimated to have gone there.

The bad news is that Westerners are among their ranks, including Americans and Europeans, who are only a plane flight away from our shores. More troubling is that security gaps in Europe—and Turkey in particular—make it easier for them to return to the West undetected once they decide to leave.

The threat from “returnees” is real and growing. These battle-hardened, violent Islamists have the training and extremist networks to plot deadly terrorist attacks against our homeland. We’ve already seen returning fighters conduct attacks in places like Belgium, and with a continuous trickle of extremists departing the conflict zone, the danger is getting greater each day. In testimony before the House Committee on Homeland Security in September, FBI Director James Comey warned that we need to brace ourselves for a wider “terrorist diaspora” out of Syria and Iraq.

It has always been a challenge to disrupt terrorist travel, but I believe some of our European partners are not moving quickly enough to confront the return of foreign fighters. Extremists have already managed to exploit Europe’s security gaps and transform it into a jihadi superhighway. The inbound lane to Syria is clearly busy, but it is the outbound lane we should be especially worried about.

Turkey, which straddles Europe and Asia, is the biggest concern. It remains the primary foreign fighter transit point. Some Turkish officials acknowledge their long, porous border with Syria is used by foreign fighters to get to the battlefield, yet their recent efforts to enhance border security do not instill confidence that they will be able to stop the foreign fighter flow anytime soon.

The Turkish government has beefed up its terror watch list. But the list is useful only if Turkey is screening against it, and the country’s air passenger screening capabilities are not where they need to be. Moreover, it is unclear how rigorously Turkey is screening outgoing passengers to identify possible foreign fighters headed back home from Syria, and even when they do, some Turkish officials say they are not getting enough information from European partners about who they should stop.

Extremists are quickly finding even more vulnerable transit points. They have reportedly begun to use cruise ships to get into the country, taking advantage of Turkey’s more lax security rules for sea passengers. This is a startlingly easy way for fighters to exit the region, too.

Equally worrisome is that terrorists might use refugee groups as a Trojan Horse to get into the West. Hundreds of thousands of Syrian refugees have poured into Turkey this year, and many of them have left for other European countries by boat. It is unclear whether extremists are hiding in these groups, as few are comprehensively screened on the way out.

Unfortunately, the Mediterranean countries where these refugees are headed, like Italy and Greece, also have a disincentive to screen them. Overwhelmed by large migrant populations drawing on social services, these governments have a reason to “look the other way” and let unregistered migrants make their way into the rest of Europe to become another country’s problem. These transit routes are disturbingly susceptible to terrorist exploitation.

Wider European Union security gaps are also a problem. EU law forbids member states from automatically running EU citizens against terror watch lists when they return to the continent’s 26-country Schengen Area, a large swath of Europe in which its citizens can travel freely without border checks. As a result, only a fraction of EU citizens are screened against terror databases when they re-enter Europe. This vulnerability may allow European foreign fighters—many of whom can travel visa-free to the United States—to make it back to the West without drawing attention.

Other EU security deficiencies can also make it easier for American extremists to travel back from the conflict zone, including the lack of an advanced EU-wide air passenger information screening system and inadequate fraudulent document detection capabilities.

In all too many ways, Europe is in a pre-9/11 counterterrorism posture. Many countries have legal barriers that prevent law enforcement and intelligence agencies from cooperating effectively, EU member states often share information in an ad hoc and decentralized way, and a number of states lack the necessary laws to prosecute foreign fighters even when they are detected.

The EU has begun to discuss how to fix some of these gaps. But it is tough to reach consensus in the EU, which is why individual member states need to begin building up their own capacity to combat this threat with or without the Union. The United States stands ready to provide assistance and share lessons learned from our own post-9/11 experience improving terrorist “tripwires.”

We also have our own work to do. The U.S. government has not released a strategy for combating terrorist travel since 2006, and watchdog groups have identified vulnerabilities in everything from U.S. biometric information collection to visa security. The Obama Administration has taken positive steps to reconcile some of these deficiencies, including recently enhancing security at overseas airports and requiring more information from foreign passengers prior to travel, but we need to do much more.

Accordingly, the House Committee on Homeland Security is launching a comprehensive review of U.S. government efforts to deter, detect and disrupt terrorist travel. This investigation is also looking closely at foreign fighter travel routes and security gaps our foreign partners can help us fill.

Connecting the dots to catch terrorists is not an easy task for a single nation, let alone a group of them like the EU. But if we do not work together better to improve our defenses—and quickly—we will be meeting the threat face-to-face at home, not overseas.

Michael McCaul is the chairman of the House Committee on Homeland Security. 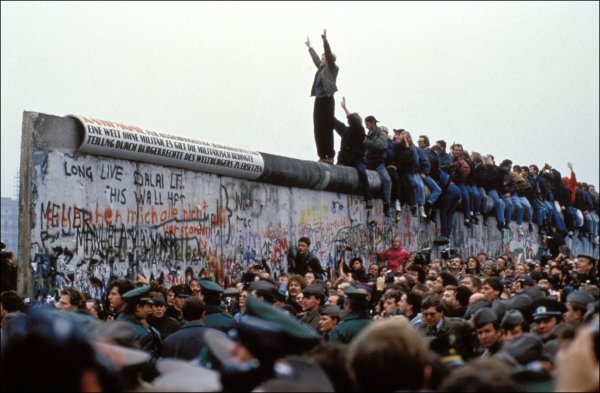 The Opportunity Germany Missed After the Wall Fell
Next Up: Editor's Pick