Ebola Patient in New York Is Cured and Released From Hospital

Craig Spencer, the physician who became the fourth person diagnosed with Ebola in the U.S., was released Tuesday after being deemed free of the virus.

“Today I am healthy and no longer infectious,” he said at a news conference.

Spencer was treated at Bellevue Hospital in New York City for just under three weeks. It’s not clear exactly what therapies Spencer received, although officials said he received “innovative, state of the art treatments” that were learned from other facilities that have successfully treated Ebola patients in the U.S., including Emory University, the University of Nebraska and the National Institutes of Health. Both Spencer and the medical staff at Bellevue, however, did also mention the importance of the supportive care he got, including hydration and nutrition fluids.

“My early detection, reporting and recovery from Ebola infection speak to the effectiveness of the protocols in place for health staffers returning from West Africa,” he said. “I am a living example of how those protocols work. Early detection is critical for both surviving Ebola and ensuring that it is not transmitted to others.”

With his parents in attendance, and surrounded by the doctors, nurses and lab technicians who contributed to his care, Spencer thanked the staff at Bellevue. New York Mayor Bill de Blasio mentioned that staffers had delivered Spencer’s banjo to him as well to help him pass the time.

Spencer, however, was eager to turn the conversation back to West Africa, where he spent five weeks in Guinea, one of the three hardest-hit nations in the outbreak that has killed some 5,000 people. “I cried as I held children who were not strong enough to survive the virus,” he said. Within weeks of his own diagnosis, he received calls on his personal cell phone from many of the patients he had cured who wanted to wish him well and offer any help he might need.

“Please join me in turning the attention back to West Africa, to ensure that medical workers and volunteers do not face stigma upon returning home,” he added. “Volunteers need our support in order to fight the outbreak at its source.”

Sophie Delaunay, executive director of Medecins Sas Frontiers (Doctors Without Borders)-USA, the group for which Spencer was working when he was infected in Guinea, echoed that message. “We could not be more proud of Craig,” she said at the news conference. “He and others [who volunteer to work in west Africa] are to be respected and honored. They protect us all. As they tirelessly care for the sick and try to stop this outbreak, it is imperative that our focus remains squarely on west Africa, the source of the Ebola epidemic. Stopping it there protects us here.”

Spencer’s fiancée, one of the four people who had direct contact with him before he was placed in isolation, remains in quarantine out of an abundance of caution as she monitors her temperature for any potential signs of Ebola. Her quarantine is expected to be lifted on Nov. 14. 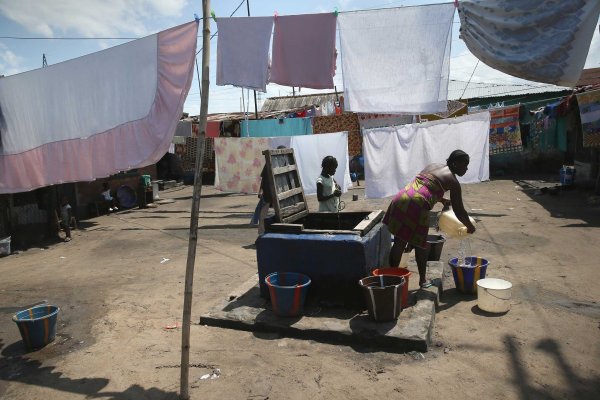 Ebola's Other Toll: Food On the Table
Next Up: Editor's Pick