We Talk So Much About 'Natural Birth'—When Can We Discuss Natural Death?

Call it a run of bad luck, but I’ve had to watch a few people die lately. First, my grandmother descended into dementia and finally faded away. Then, my mother battled leukemia and lost her life to its treatment. Next, a great aunt died at age 102 in her home, very peacefully. And now I take care of my 92-year-old grandfather, and his time is drawing near.

In the six years since I had my son, I’ve watched my kid grow up while I’ve watched the rest of my family grow down. My son went from being wheeled in a stroller to toddling to walking. My elders went from walking to falling to wheelchairs.

Poised as I am between the beginning and the end of life, I had to ask myself, why do people talk so much about natural birth but not much about natural death? My friends with babies spent inordinate amounts of time discussing how and where to have them. Should they give birth in a hospital or in a kiddie pool? Should they use pain killing drugs or not? Google “natural birth,” and you’ll be treated to YouTube videos of moms popping out kids in the woods, heated debates about homebirth’s merits and dangers, and tons and tons of books, blogs, and so on.

A Google search on “natural death” doesn’t turn up much. Searching “hospice” brings up boilerplate readings, more about spiritual advice than concrete decision-making about end of life care.

I won’t start a debate here about the best way to give birth; it will suffice to say that being born is one of the most dangerous things you’ll ever do. But the risk of death when you die is… well, there’s no risk anymore. It’s 100% inevitable. Still, we don’t talk about it quite as much.

At least, I thought no one was talking about it, until, while doing some research to write this piece, I discovered and devoured Atul Gawande’s book, “Being Mortal.” Reviews are just coming out now, praising this book all over the place, and the praise is deserved.

The question I was struggling with is a big one. What is “natural death,” with all the advances of modern medicine? We can keep people alive to the point that their lives have almost no value, but doctors tend not to be trained to address the subject of mortality with their patients. Decision-making at the end becomes very difficult, as I can tell you from too much experience.

Gawande characterizes one type of doctor, the “information doctor,” who gives options but doesn’t truly explain what each means. That resonated with me. My mother consulted two oncologists, who gave different treatment paths but no accurate big picture.

What Mom’s doctors avoided telling us was that acute myeloid leukemia had her backed into a corner. She would not gain any meaningful additional days through treatment. Her only choices were how to make the best use of her remaining days. She certainly would have lived longer, and arguably better, without chemotherapy.

I can only see this now in retrospect, because I did not know what questions to ask when I needed to ask them. Even as a lifelong nurse, neither did Mom. She opted for aggressive treatment, which killed her very quickly. Chemotherapy weakened her immune system, and a fungal infection took over her lungs. She died on a respirator, in a way she would not ever have wanted, while searching for a cure. Only now do I understand that there simply was no cure for her. She was not a good candidate for aggressive treatment, due to numerous other health issues. She would have done better to live out her remaining few months peacefully, but she went suddenly, and the effect was traumatic for us all.

Living with my grandfather has made me consider my own old age and how I will spend it, should I be so lucky. Gramps won’t have a “natural death,” either, since he’s been essentially kept alive artificially for decades by medicine, from his pacemaker to the 20 medications he takes every day to keep his lungs absorbing oxygen properly, his insulin levels normal, his blood thin enough not to cause another stroke or heart attack, his gout at bay, the fluid from building up in his ankles, his Parkinson’s from advancing too quickly, his kidneys functioning, and his colon pooping regularly. He can no longer pig out on potatoes (too much potassium), eat cake (too much sugar), or have more than a smidgeon of wine per day. He can’t walk anymore. He needs help doing everything, from dressing to eating to toileting. (It’s really only when we’re very young and when we’re very old that we use toilet as a verb.)

All of that would drive me absolutely bananas. I wouldn’t want to live that way. Given a choice between old age and cake as means to my end, I choose cake! Give me some chocolate frosting and a martini, and I’ll live 20 fewer years. Anyway, that’s what I think now. Maybe I won’t feel the same when I have grandkids.

My grandfather, on the other hand, loves his life. He loves waking up, having coffee, and reading the paper. He loves going to the park and watching the dog. He loves “Judge Judy” and “Dateline.” He loves listening to classical music. For him, life is still worthwhile. He may not have long, but he’s going out in style — his style. If you have spent your life in a recliner, watching TV, old age isn’t so bad. I’m not being sarcastic; I think his outlook is pretty great. I don’t share his values, but with lifting the remote control as his only exercise, Gramps made it to 92. Who can argue with success?

Still, even for Grandpa, things will get to a point when medical interventions don’t make sense anymore. He has filled out an advance directive, so I know he doesn’t want to end up on life support. But there are other matters to consider when one gets old. Recently, his doctors advised him to have a prostate procedure. He went through with it, but it did no good at all. He pees on himself even more than before. Why did he have this pointless surgery, at the age of 92, when his other health issues are probably going to end things fairly soon? It didn’t make sense to me, and that is the kind of stuff you have to start to think about when you are old. Do you want to be in the hospital ANY longer than necessary when you might not have much time left? At a certain point, it’s better to just let nature take its course.

After reading Gawande’s book — which I’d recommend to anyone who, you know, might be planning to die someday — I stopped thinking about my grandfather’s medical care as much, and am focusing on trying to fill the time we have with meaningful activities. I watch football with him. I wheel him over to the park. He has a music therapist through his hospice program, and he plays the flute with her sometimes. Before this book, I was always dragging him to the next critical medical appointment and ordering his prescriptions and talking to doctors. I do that less now. Now I try to hang out with the guy. I think he’s feeling that the end is near, too, because he’s less anxious lately. He sleeps more. We’ll get to the cardiologist and the podiatrist soon, but eh, is it really something to stress out about, when it’s a nice day outside?

We’re looking more at how to make the next months or year or two as comfortable and meaningful as possible, rather than trying to “fix” a bunch of physical problems that are ultimately unfixable. Surgery for comfort is one thing, but in the end, our bodies just wear out. It’s coming, there’s no fighting it, and sometimes medicine just makes it worse than it needs to be.

As it turns out, doctors agree. Physicians tend to die with less treatment than the rest of us, because they know the limits of their practice. Recent coverage of Brittany Maynard shows us that end of life choices are definitely on the minds of the public now.

But most of us will not resort to taking our own lives in the face of a swift terminal illness. For most of us, the decline will be more gradual. If you are lucky enough not to die a sudden death, the end is slow and there are some terrible decisions along the way. So it’s worth thinking about how we exit—and it is as important, and can be as meaningful, as how we enter.

Julie Cross is a screenwriter and graduate of UCLA Film School. 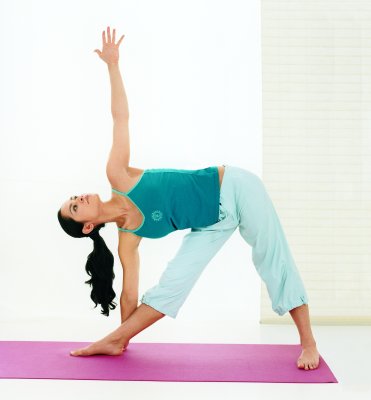 3 Ways Yoga Benefits Your Brain
Next Up: Editor's Pick