President Barack Obama’s decision to call for the strictest regulation of consumer broadband Internet is the result of months of internal White House debate over how to push the Federal Communications Commission to propose stronger Open Internet rules, government and industry insiders familiar with the process tell TIME. The Monday announcement comes days before an FCC deadline on the issue.

Obama’s surprise statement reverberated across the worlds of policy, business and technology, and appeared to shift the momentum in the long-running war over the future of the Internet. It drew a defensive response from FCC Chairman Tom Wheeler, drove down cable stocks, and juiced the debate between Open Internet advocates and the nation’s biggest cable and phone companies, like Comcast, Verizon and AT&T.

The question now is whether it will be enough to shift Wheeler and the FCC off their current, more cable-friendly path ahead of a deadline next week for the commission to publish revised rules for consumer broadband Internet. The revised rules would need to be published by Nov. 19 in order for the FCC to vote on them at an upcoming December meeting.

Obama’s statement is a shot across the bow for Wheeler, a former telecom lobbyist and one of the president’s top fundraisers in 2008 and 2012. For the last year, Wheeler has resisted proposing Open Internet rules that would prevent broadband service providers from collecting fees from content companies in exchange for special access to Internet users—an arrangement formally known as “paid prioritization,” but often dismissed pejoratively as “Internet fast lanes.”

The FCC’s latest rules, proposed in April, were widely panned by Open Internet advocates, including powerful Internet companies, like Google, Amazon, and eBay, for allowing for such paid prioritization agreements.

Over the last six months, Obama has increasingly distanced himself from Wheeler and the FCC’s proposed rules. In May, the White House said only that it would “carefully review [the FCC’s] proposal…in hopes that the final rule stays true to the spirit of net neutrality.” But by October, Obama’s rhetoric was almost impatient.

“My appointee, Tom Wheeler, knows my position,” he said during a speech in California on Oct. 10. “I can’t—now that he’s there, I can’t just call him up and tell him exactly what to do. But what I’ve been clear about, what the White House has been clear about is, is that we expect whatever final rules to emerge to make sure that we’re not creating two or three or four tiers of Internet. That ends up being a big priority of mine.”

Two weeks after Obama’s October speech, Wheeler floated another idea for regulating consumer broadband: a “hybrid approach” that would be slightly stricter on broadband service providers but still allow for paid prioritization agreements. The proposal was again panned by Open Internet advocates for allowing Internet fast lanes while calling them something else.

Frustration with Wheeler’s apparent unwillingness to ban paid prioritization altogether spurred some White House aides to encourage the president to take a more active role in the debate, sources who have been involved with the process tell TIME. For the last several months, Obama and his staff have been studying all of the options available to the FCC to protect an open Internet, according to a White House official.

Tim Karr, who works with Free Press, an Open Internet advocacy organization, said that Obama’s choice to make such a bold proclamation now—just a week after the mid-term elections put Democrats on the defensive—is a powerful signal that his administration will be “willing to take bold executive actions even in a lame duck role.”

It’s also an indication of the influence of the so-called Internet community, which gained political prominence after successfully overturning the SOPA/PIPA legislation in 2011 and, this year, flooding the FCC with four million comments on its proposed rule. “[P]hones have been ringing off the hook at the White House for weeks,” wrote Craig Aaron, the president and CEO of Free Press in a statement.

The White House’s announcement Monday, which took the form of both an open letter and a video, calls on the FCC to reclassify consumer broadband service under Title II of the Telecommunications Act—a move that would give the FCC explicit legal authority over Internet service providers and that most Open Internet advocates say is necessary in protecting future Open Internet rules from inevitable court challenges from the telecom industry. In January, a federal appeals court threw out the FCC’s previous net neutrality rule on the grounds that the agency did not have the legal authority to regulate broadband Internet.

On Monday, Wheeler responded to the White House’s call with a rather defensive note, pointing out that the FCC is an independent agency, before launching into a long explanation of the legal complexity posed by reclassifying consumer broadband services under Title II.

The sentiment was echoed by big Internet service providers, Republican lawmakers, and anti-regulatory advocates, all of whom argued that classifying broadband Internet under Title II is a “nuclear option” that will destroy innovation and undercut private sector investment in Internet infrastructure.

“Reclassification under Title II, which for the first time would apply 1930s-era utility regulation to the Internet, would be a radical reversal of course that would in and of itself threaten great harm to an open Internet, competition and innovation,” a Verizon spokesperson said in a statement.

Comcast vice president David Cohen was similarly alarmed. “To attempt to impose a full-blown Title II regime now, when the classification of cable broadband has always been as an information service, would reverse nearly a decade of precedent, including findings by the Supreme Court that this classification was proper,” he said in a statement.

Senator Mitch McConnell (R-Kentucky), who is expected to become the Senate Majority Leader next year, House Speaker John Boehner (R-Ohio), and House Majority Leader Kevin McCarthy (R-California) all published statements warning that Title II was a mistake. “The Commission would be wise to reject it,” McConnell said.

“Today’s proposal is a step backward and would slow innovation if implemented,” said Mike Montgomery, the executive director CALinnovates, a San Francisco-based coalition that works on public policy in technology. He added that while “protecting consumers and innovation is a noble cause… we should be creating new laws to deal with new technologies.”

Meanwhile, Open Internet advocates pooh-poohed such concerns. “We are looking for rules that are not burdensome to the Internet’s users,” said Michael Beckerman president and CEO of the Internet Association, an advocacy group that represents Amazon, Facebook, AOL, Netflix, and dozens of other large Silicon Valley firms. “We want to ensure that you don’t need to hire a lawyer or pay a fee” to ensure that your content is reaches all Internet users equally.

Beckerman also warned that while a bit of celebration is in order, the biggest battles—getting the FCC to actually write strong rules—have yet to be fought. “Even if the FCC reclassifies consumer broadband service under Title II, the resulting rules could still allow for paid prioritization agreements,” he said. “We’ll be watching the details closely.”

Read next: All Your Questions About Obama’s Internet Plan Answered 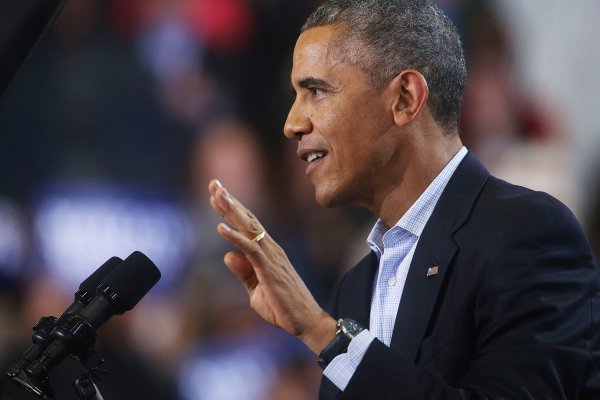 All Your Questions About Obama's Internet Plan Answered
Next Up: Editor's Pick