The word was a point of contention between her show, Inside Amy Schumer, and the cable network during the second season. Though certain other references to male sex organs were allowed on Comedy Central, this term for female genetalia was not. Dan Powell, the show’s executive producer, had argued for its use and cited gender inequality.

“Dan decided that it wasn’t fair that they bleep the word ‘pussy,'” Schumer, explained at a Paley Center for Media panel this past weekend, according to Vulture. “Because you are allowed to say the word ‘dick’ on Comedy Central,” added Jessi Klein, head writer and executive producer.

If any show could win that battle, it was Inside Amy Schumer, a sketch show that often comments and criticizes the different standards for women and men. “Halfway through the first season, we started to realize that a lot of the show was addressing women’s issues and gender politics,” said Powell. “I’d written a letter, sort of like write I’d write to my congressman, and I guess it struck a chord.” Schumer called the victory Powell’s Mr. Smith Goes to Washington moment.

The writers embraced the new privilege with gusto. Check out the first sketch where the word isn’t bleeped out. 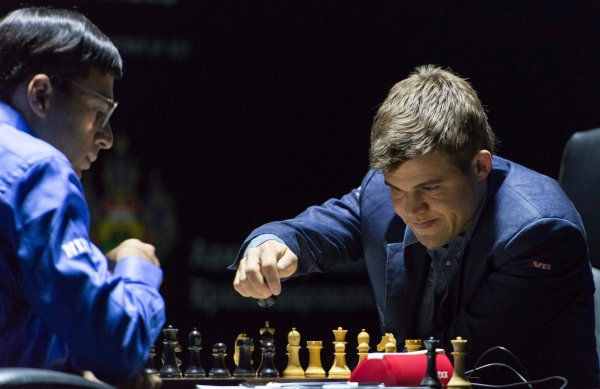 World Chess Championship Begins in Sochi
Next Up: Editor's Pick