A house on fire in the aftermath of an overnight shelling attack in Donetsk, Ukraine on Nov. 9, 2014.
Pochuyev Mikhail—Itar-Tass/Corbis
By David Stout

The Obama Administration expressed serious concern over the resumption of fighting in Ukraine’s restive southeast as heavy bouts of shelling near Donetsk over the weekend threatened to shred Kiev’s fragile ceasefire with Russian-backed separatists.

On Sunday, U.S. National Security Council spokesperson Bernadette Meeha issued a statement demanding the Kremlin abide by the two-month-old truce, signed in the Belarusian capital of Minsk in September, and halt efforts to reinforce rebel fighters.

“We reiterate our call on the Russian Federation to honor all of the commitments it made in Minsk, including ending its military supply to the separatists and the withdrawal of all of its troops and weapons from Ukraine,” said Meeha.

Earlier in the day, the Organization for Security and Cooperation in Europe (OSCE) reported two unmarked convoys transporting heavy artillery and rocket launcher systems in separatist-held areas over the weekend.

Deputy commander of the Donetsk People’s Republic militia Eduard Basurin later told Russian news agency RIA Novosti that the columns were being manned by “independence supporters” and had been moved “for tactical reasons.”

“It is imperative to avoid any re-escalation of hostilities,” said Mogherini.

Humanitarian agencies meanwhile warned that the victims of the seven-month conflict are in need of more aid. Late last week, the U.N. Office for the Coordination of Humanitarian Affairs stressed that 462,400 internally displaced Ukrainians still required urgent attention as winter arrives in the eastern European nation.

“In-country humanitarian agencies envisage that this deterioration of the humanitarian situation will be further compounded by the rapidly approaching winter with many IDPs [internally displaced persons] housed in unwinterized shelters,” said the agency in a statement.

The U.N. estimates that approximately 4,000 people have been killed since fighting first erupted in the wake of a pro-Russian uprising in southeastern Ukraine’s Donbas region in April. 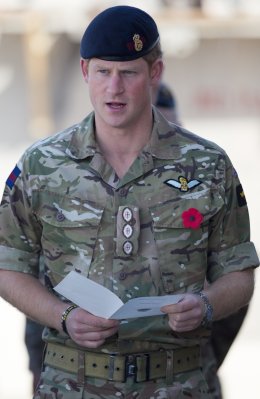 Prince Harry Honors the Fallen
Next Up: Editor's Pick