The last time President Obama’s plane touched down in the Chinese capital, it was November 2009. The U.S. economy was in the doldrums, Obama was bold and charismatic, riding high on hope and change, and promising a “pivot” east. He met then with China’s stone-faced former President, Hu Jintao, a cadre who oversaw rapid economic expansion but will be remembered for his sheer colorlessness.

Today, the U.S. economy is back on track, but Obama is politically battered. He meets this time around with his new Chinese counterpart, President Xi Jinping. Since coming to power, Xi has proved himself as savvy as his predecessor was a snore. As growth slowed, he moved quickly to consolidate power and purge rivals, earning comparisons to strongmen like Mao Zedong and Deng Xiaoping. His goal is nothing short of the “revitalization of the Chinese nation.” He talks evocatively of the “Chinese dream.”

The reversal of fortune is not lost here. Though the atmosphere at this week’s Asia-Pacific Economic Cooperation (APEC) summit is outwardly welcoming — heck, they literally cleared the skies of smog for the event — there is definitely a “my, how the tables have turned” sentiment in the air. “Obama always utters ‘Yes, we can,’ which led to the high expectations people had for him,” scoffed one particularly strident editorial in the Global Times, a state-linked newspaper. “But he has done an insipid job, offering nearly nothing to his supporters.”

But the meet may yield more than schadenfreude alone. Having essentially shut down swaths of the northern China to keep the pollution away and the traffic flowing, China will be laying out the welcome mat for the visiting dignitaries, Obama included. On Monday, Nov. 10, the U.S. President delivered a speech at APEC, before a dinner and a fireworks display. The main event will be a meeting at the Great Hall of the People on Wednesday. (From there, Obama flies south to Burma, officially known as Myanmar, and then on to the G-20 in Australia.)

Though the Xi-Obama talks are unlikely to make headway on issues like human rights, cyberspying or disputed territories in the South China Sea, both sides insist there is room for some positive steps, perhaps on climate change or antiterrorism cooperation. And the release of two U.S. prisoners from North Korea on the eve of Obama’s arrival may give them reason to talk about how to manage relations with North Korea’s young dictator, Kim Jong Un.

The U.S. will be pushing hard for a trade pact called the Trans-Pacific Partnership (TPP), an American-led agreement between 11 nations that would put the “pivot” into action at last. Secretary of State John Kerry called it “a battle that we absolutely must win.” In Beijing on Nov. 10, Obama emphasized economic integration. There is “momentum building around a Trans-Pacific Partnership that can spur greater economic growth, spur greater jobs growth, set high standards for trade and investment throughout the Asia-Pacific,” he says.

The challenge, however, is that China — which is not part of the TPP — is fighting for a separate pact, the Free Trade Area of the Asia Pacific, or FTAAP. On this and other issues Beijing’s message is clear: We’ll be cordial, but this is a new era, and we can play by our rules.

Read next: It’s Not Obama, It’s Just the Sixth Year 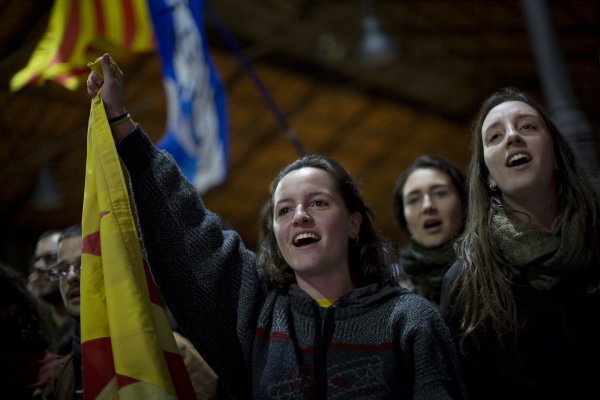 Catalans Want Independence From Spain
Next Up: Editor's Pick