In the course of John Cleese’s interview this week for TIME’s 10 Questions, the British comedy icon named the top five sketches he has written and/or performed in. He loves his Monty Python work, but given that it “would not be terribly interesting” to choose his best-known skits, he named some of his less celebrated comic works:

Cleese conceived of the Cheese Shop sketch with his writing partner Graham Chapman after enduring a bout of seasickness in which he threw up on a cameraman twice, he recounts in his new memoir, So Anyway. He was looking so piqued as the duo drove home from the shoot that Chapman offered to buy him cheese, but the only store open was a pharmacy, so they began to imagine what it would be like to buy cheese there. Not long after that, one of his favorite sketches was born.

He’d also put on his list of favorites the Beekeeper sketch, here performed with that other British comedy icon best known for playing nutty characters (in this case, Mr. Bean), Rowan Atkinson.

This sketch, also from The 1948 Show, is clearly a precursor to some of his other manic shopkeeper exchanges.

“It’s not a sketch but it’s a scene,” says Cleese. “I think that was one of the funniest things I wrote.”

Cleese lists two other favorites, a sketch from The Frost Report (on BBC between 1966 and 1967) in which he played a Sherlock Holmes-like character and a court scene also starring Tim Brooke Taylor from the show Cambridge Circus, a London theatrical production of a show that originated at Cambridge University and starred many of the performers who would go on to dominate England’s comedy scene. We’ll have to take his word for it, because neither of those sketches are available on the Internet.

While the Cheese Shop became one of his favorite creations, initially Cleese was dubious about whether it was funny. Chapman, who died in 1989, had to reassure him to keep writing it. “I was always reliant for those things on Graham,” Cleese said in his TIME interview. “He seemed to have a better judgment of what was funny than I did. Later on I think my judgment got better, but I’ve always found it difficult, even at this stage of my life, to know whether something was slightly funny or whether it’s terribly funny.” 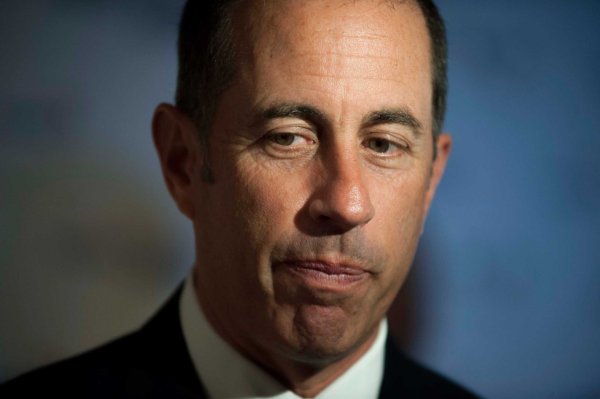 Jerry Seinfeld to Brian Williams: 'I Think I'm on the [Autism] Spectrum'
Next Up: Editor's Pick