How Veterans Day Came to Be

On Nov. 11, many years ago, a group of men gathered in a transport to sign a document with vast repercussions for the world.

This wasn’t the signing of the Armistice in a train car in France on Nov. 11, 1918, which brought World War 1 hostilities to an end; that happened centuries later. This was the signing of the Mayflower Compact, on the ship of the same name, that in 1620 established governing rules for the Plymouth Colony, one of the earliest settlements in North America.

The date of the Mayflower Compact signing has largely been eclipsed by the Armistice, which ended a war that killed more than 16 million people, including over 100,000 Americans. After the conflict, Americans commemorated the moment “from coast to coast and frontier to frontier,” as TIME wrote in 1927. Congress officially dubbed the date Armistice Day in 1926 and made it a national holiday in 1938.

But creating a formal holiday soon looked tragically premature. Nazi Germany invaded Poland a year later, unleashing the Second World War and shattering the tenuous peace wrought by the Armistice. Even before the United States entered the war, Armistice Day felt obsolete here. “To many Americans the events of the last 15 months have made the Armistice seem less important and less worthy of a national holiday,” TIME wrote in an article in November 1940. “So last week Dr. Francis Carr Stifler, editorial secretary of the American Bible Society, suggested that it would be far more appropriate to celebrate the anniversary of the Mayflower Compact this Monday.”

Stifler called the Mayflower Compact “the cornerstone on which stand the Declaration of Independence and the Bill of Rights.”

His proposal didn’t take hold, but the sentiment remained. How could America commemorate the end of World War I when a conflict less than two decades later mobilized 16.5 million Americans and cost the lives of 400,000? On Nov. 11, 1947, World War II veteran Raymond Weeks organized a parade in Birmingham that honored all veterans. (Memorial Day, a much older holiday, commemorates Americans who have died in the armed services.) Dubbed “National Veterans Day,” that occasion is credited as the first celebration using the term Veterans Day, according to the Department of Veterans Affairs.

The official date would go through one more makeover. Veterans Day was swept up in a movement by the federal government, under pressure from the travel industry, to shift national holidays to Monday and allow for more three-day weekends. In 1968, Congress rescheduled Washington’s Birthday (later known as Presidents’ Day), Memorial Day, Columbus Day and Veterans Day to fall consistently on Mondays. But as the VA writes, ” November 11 was a date of historic significance to many Americans.” Congress shifted the official holiday back to Nov. 11 in 1978.

Read the 1927 story about how the winners and losers of World War I observed Armistice Day: Armistice 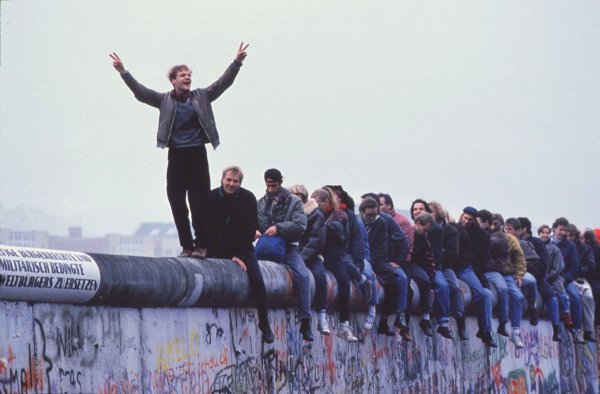 Quiz: Test Your Berlin Wall Knowledge
Next Up: Editor's Pick