Go to Disney’s Big Hero 6, and you’ll see a wonderful movie: the short cartoon before the animated feature. In Feast, a Boston terrier named Winston feeds on the treats his master tosses him: bacon and eggs, pizza, nachos — all the snacks a single man thrives on. When the man begins seeing a woman, the scraps left for Winston turn organic: a Brussels sprout topped with a sprig. In six minutes, writer-director Patrick Osborne synopsizes a dozen years in a man’s life, from loner to dater to husband and father, as seen and shared by winsome Winston. Shot with a narrow color palette and dramatically flat shapes, and overflowing with heartful wit, Feast is a banquet for all lovers of dogs, food and movies.

Stick around for the feature attraction — on which Osborne worked as co-head of animation — and you’ll find another non-human character every bit as appealing as Winston. It’s Baymax, a robot caregiver for young Hiro, the hero of Big Hero 6. In repose, Baymax fits into a small suitcase. But when it hears the word “Ow,” it inflates into a six-foot, white, vinyl balloon animal with black eyes and the pudgy shape of the Sta-Puft Marshmallow Man from Ghostbusters, or Po the Kung Fu Panda. Programmed to speak in a benign, avuncular tone (voiced by Scott Adsit) as he detects and corrects health problems, Baymax becomes the fussy guardian of Hiro, his friends and virtually any other creature it sees. Finding a big orange cat, Baymax pets it and soothingly whispers, “Hairy baby!”

Hiro (Ryan Potter) needs help. In the future city of San Fransokyo, this 14-year-old brainiac makes his living as a petty criminal hustling his own prize robot at underground bot fights. Adhering to a Disney tradition as old as Snow White and as recent as Frozen, the new movie makes Hiro an orphan who must fend for himself. He then loses his big brother and fellow science genius Tadashi Hamada (Daniel Henney) in an act of sabotage at the San Fransokyo Institute of Technology, where they have both become students. To solve the mystery of his brother’s death, he teams with four other SFIT misfits: perky Honey Lemon (Genesis Rodriguez), lumbering Wasabi (Damon Wayans Jr.), cool GoGo (Jamie Chung) and party-hearty Fred (T.J. Miller). Add the resourceful Baymax, and you have the Big Hero 6 team.

Directed by Don Hall (Winnie the Pooh) and Chris Williams (Bolt), and very loosely based on a lesser galaxy of Marvel Comics characters, this is the rare Disney animated feature that sets out to establish a franchise. (If it’s a hit, there’ll surely be a Big Hero 6 2.0.) Except for Baymax, and possibly Hiro, the team members are rudimentary sketches of clumsy or foxy nerds; the amiably doltish Fred, for example, is simply a pale copy of Shaggy, the Scooby-Doo sidekick voiced by Casey Kasem.

Initially meant to illustrate the effective use of brain power, the kids transform themselves into a military-industrial complex, becoming weapons masters in a montage scored to Fall Out Boy’s “Immortals.” (Even Baymax gets outfitted in red Iron Man armor.) In sum, they are the Mission: Impossible crew relocated to San Fransokyo’s Mission district — or, to make a Disney-Pixar comparison, The Incredibles without the emotion or verve.

The plot, which involves the theft of the microbots Hiro has invented, is also on the generic side: a Kabuki-masked villain has turned Hiro’s potentially life-saving bots into an army of evil, shape-shifting dominoes. But in the screenplay by Robert L. Baird, Daniel Gerson and Jordan Roberts, there’s also an odd parental twist. Having killed off Hiro’s mother, father and older brother, and allowing the other team members no visible parents, the writers introduce two father figures who are either untrustworthy (tech titan Alistair Krei, who is voiced by Alan Tudyk and looks like a sleazy Julian Assange) or violently missing presumed dead (the Malden-faced SFIT Dean Robert Callaghan, voiced by James Cromwell). So it’s odd that the third act should turn on a father who is both grieving and enraged.

If the story doesn’t grab you, the visuals will. San Fransokyo is sumptuously designed as a clash of Tokyo and Bay Area architecture; the Golden Gate Bridge tower is pagoda-shaped. The kids, like those in anime books and movies, have Japanese-American features, suggesting the melding of races as our future world interbreeds attractively. Finest of the movie’s hybrids is Baymax, a robot who’s also a mensch. He doesn’t have much competition, but he’s the most human character in Big Hero 6.

On the high-quality scale set by the Disney animated features in their latest Renaissance — The Princess and the Frog, Tangled, Wreck-It Ralph and Frozen — this one doesn’t quite measure up. But Big Hero 6 is sure to entertain millions of smart kids and their escort parents. They may all want Baymax as their personal caregiver. And if they see the adorable Feast, there’ll be a run on Boston terriers as Christmas pets. 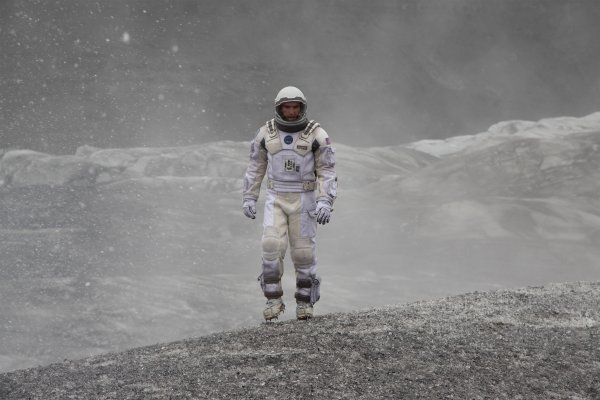 What Scientists Say Interstellar Got Right
Next Up: Editor's Pick