Production staff on the weekly fashion magazine, Grazia edit the magazine in a temporary office inside the Westfield shopping centre on November 3, 2008 in London.
Oli Scarff—Getty Images
By John Patrick Pullen

It might be due to the darkness that accompanies shorter days, or the invasion of warmer, comfier clothes into the winter workplace, but now is the time when long hours, slouching, slumping, and straining dominate the office. Clean up your act around the computer, before bad habits lead to poor health.

Here are five ways to make sure your computer desk doesn’t become the death of you.

1. Give your monitor a second look.

If your screen is planted directly on your desktop, it’s time to ask management for a raise — for your computer’s display. According to Dr. Jim Sheedy, director of the Vision Performance Institute at Pacific University, the top of your the screen should be level with your eyes. The ideas is to get the eyes looking down about 10 degrees. If it’s any lower or higher, computer users will adapt to it by moving their head. If your screen is to low, your head points down, causing neck and back aches. High displays, meanwhile, contribute to dry eye syndrome.

2. Poor posture? Take it on the chin.

Poor posture is something that every office-based employee should consider throughout their day. Most people sitting at a computer get drawn into the screen, which means they crane their necks forward. This imbalance puts strain on the neck and spine. It’s like holding a bowling ball with one hand, says Dr. James Bowman, of Portland, Ore.-based Solutions Chiropractic. If your arm is vertical underneath, it puts less strain on the muscles, but lean that ball forward and your muscles have to compensate to keep it aloft. Sitting at a desk, that bowling ball is actually our head, so Bowman recommends chin retractions, or making a double chin, to keep the neck and spine lined up underneath.

“It’s probably the most effective single exercise you can do for the upper back and neck,” he says.

3. Stand up for yourself.

The modern workplace was built around the concept of sitting, but humans’ ability to stand goes back millions of years. Buck the trend of the office era with a standing desk — or, if that’s too radical, a sit-stand workstation. According to research out of the University of Minnesota and the Mayo Clinic, sit-stand workstations helped workers replace 25 percent of their sitting time with standing up, which can increase their sense of well being and decreased their fatigue and appetite. The Jarvis Desk can go from 26-inches to 51-inches at the push of a button, lifting up to 350 pounds of whatever’s on your desk—including multiple monitors.

“I definitely feel healthier standing while working as it causes me to be more focused on my posture and ‘hold’ myself better in terms of my stomach and shoulders especially,” says Dan McCormack, who uses a Jarvis Desk at his home office in Austin, Texas.

But why stand when you could walk? Many offices around the country are getting wise to treadmill desks, which can help workers burn 100 calories more per hour over sitting, according to a study by the National Institutes of Health.

“The most important thing is to switch it up and work in different positions throughout the day,” says Emily Couey, Eventbrite’s vice president of people. The online event ticketing service offers multiple workspace options including traditional sitting desks, standing desks, and treadmill desks, which Couey says “people love, because it allows them move while they work — especially those with fitness trackers counting their daily steps.”

All work and no play makes Jack a bad employee. Whether it’s on their phone in the bathroom or on the computer in their cube, everyone takes sanity breaks to check their Facebook or read some news. The Pomodoro Technique even encourages this kind of behavior by breaking tasks into “pomodoros,” intense 25 minute work bursts, followed by five-minute breaks.

Named because they can be measured using little tomato-shaped kitchen timers (Pomodoro is Italian for tomato), this method lets people work intensely and stave off distraction, yet rewards them with time to goof off, as well. If you don’t have a tomato timer handy, there are a lot of apps online to keep track of your sessions. But Francesco Cirillo, the technique’s founder, recommends using the real deal.

“You have to be able to actually wind it up,” Cirillo says in his book, The Comodoro Technique. “The act of winding up the Pomodoro is a declaration of your determination to start working on the activity at hand.”

Read next: 7 Healthy Alternatives to Coffee at Work 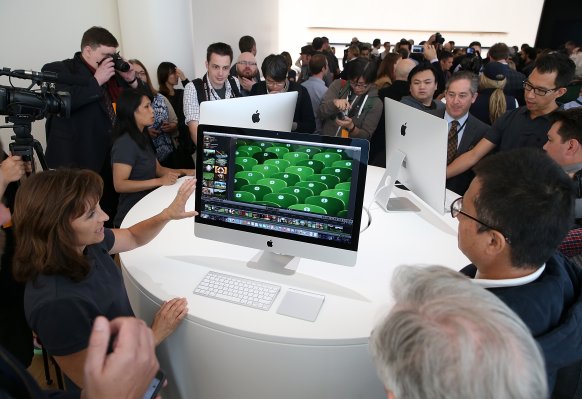 Everything You Need to Know About Apple's OS X Yosemite
Next Up: Editor's Pick