In the end, it took a crime that was shocking even by the standards of Mexico’s blood-soaked drug war for federal forces to sweep down on this small community of 140,000 in the country’s southern Guerrero state. On the night of Sept. 26—a date now inscribed on Mexico’s calendar of historic atrocities—police and cartel thugs in the town of Iguala went on a killing spree. First they shot dead three students and three passersby, slicing the face off one victim and leaving his corpse on a street. Then they kidnapped 43 students, reportedly carting them off in police cars before throwing them into a cattle truck. No one knows what happened to them nextI

A hunt involving 10,000 soldiers and federal agents has failed to find the students, who were training to become teachers. But it did turn up the mass graves of other victims: in the hilly woodlands on the edge of Iguala, the stink of rotting human flesh fills the air, from pits scattered among pine trees, ravines and dirt paths—two, three, five corpses in one, the bodies burned, mutilated, decomposing. By early November the security forces had dug up 38 cadavers.

Locals in Iguala­—a town where police officers, the mayor and his wife are alleged to have been in cahoots with a brutal drug cartel—describe how a climate of fear had been building up for several years. Cartel thugs dumped severed heads on the main road out of town; farmworker activists were shot dead; residents disappeared. All the while, gangsters would drive around with impunity, flashing their Kalashnikov rifles from bulky pickup trucks. “The bad men would come in the night in convoys of vehicles,” says Ramiro Vazquez, a corn farmer who lives in a rugged home of brick and tin near the mass graves. “Sometimes we would hear gunshots. Sometimes we would hear screams. Of course I never called the police. Sometimes the police were with the murderers.”

The grisly crime has shattered President Enrique Peña Nieto’s efforts to clean up his country’s violent image. It has also sparked the biggest protests in Mexico in years, as students, teachers and others light candles, block roads and in some cases burn government buildings in outrage. “Anger about corruption and violence has been growing for a long time. But the attack on these student teachers is the straw that broke the camel’s back,” says Lorenzo Meyer, a political analyst in the capital, Mexico City. “It destroys the fiction that everything is going well and the market is going to work its magic. This is a breaking point.”

The Iguala attack brings together several of Mexico’s most pressing challenges in one chilling case. The students were mostly the sons of peasant farmers and laborers in destitute southern villages that underscore the persistence of poverty despite Mexico’s economic promise. The alleged role of the police speaks of the brutality of crooked officers. Iguala Mayor José Luis Abarca—arrested in Mexico City on Nov. 4—seems, if the accusations against him are true, to symbolize the corrupt politicians who are holding the nation back. The mass graves uncovered in the search highlight the violence and injustice that so many Mexicans have suffered, with more than 70,000 killed in cartel-related violence and more than 16,000 disappeared in the past seven years alone.

The bloodshed is also a reminder of the shortcomings of the war on drugs Mexico is waging with the support of the U.S. Though he talks less about the cartels, Peña Nieto has continued the basic strategy of his predecessor President Felipe Calderón: go after the major kingpins who traffic billions of dollars worth of marijuana, cocaine, heroin and crystal meth to American users. Mexico has nabbed top mobsters, including Joaquin “El Chapo” Guzmán, perhaps the most infamous gangster on the planet. But in their wake, smaller, unpredictable and even more violent cells of traffickers have emerged, casting their shadow over towns like Iguala.

“The drug-cartel heads used to be like monarchs,” says Mike Vigil, the former head of international operations of the U.S. Drug Enforcement Administration (DEA). “They used to run their cartels like despotic leaders. But now they are more organized like a global corporation, with subsidiaries that are semiautonomous.”

Just what triggered the latest horror remains unclear. Tucked between gold mines and gravel quarries, Iguala is a strategic smuggling town in a state where gangsters have long grown opium poppies for heroin and cultivated the marijuana known as Acapulco Gold (one of the few strains to make the Oxford English Dictionary). For years, it was the turf of a drug kingpin called Arturo Beltrán Leyva, alias the Beard. But in December 2009, Mexican marines working with the DEA shot Beltrán Leyva dead in a nearby spa town.

Following his death, gangsters in and around Iguala formed a new cartel, calling themselves Guerreros Unidos, or Warriors United—but they were largely off the DEA radar, their violent enterprise operating in communities far from the U.S. border, their bosses little-known figures.

The Warriors tightened their grip on small communities like Iguala by inserting their members directly into positions of power. Federal prosecutors say Iguala Mayor Abarca, who took office in September 2012, was a key Warriors operative, laundering their money through a local business emporium. Abarca owns a stunning 65 properties, including jewelry stores and a shopping center, prosecutors say.

Investigators have also named the mayor’s wife María de los Ángeles Pineda as a Warriors operator. Known as the Queen of Iguala, she would roam the town in flamboyant jewelry with tough-looking bodyguards. The cartel is said to have inserted its gunmen into the police force. “Warriors United has sewn a web of complicity with several mayors and above all with security officials,” Mexico’s Attorney General Jesús Murillo Karam said on Oct. 22.

The students who walked into this narco snake pit on Sept. 26 attended the Ayotzinapa university, a rural school founded after the Mexican Revolution to bring literacy to the countryside. Back in the 1970s, its alumnus Lucio Cabañas led one of Mexico’s biggest guerrilla campaigns of the 20th century. More recently, students have been protesting an overhaul of the education system by Peña Nieto that they say threatens their job prospects. They’ve been blocking highways and, like their predecessors, commandeering commercial buses to get to their marches. (They usually return the vehicles.)

On Sept. 26 about 120 of Ayotzinapa’s trainee teachers went to Iguala to hijack buses to travel to Mexico City, where they hoped to commemorate a massacre of students back in 1968. After taking two vehicles, they ran into a blockade of police officers, who quickly started firing at them. Joining the officers were mysterious gunmen in plainclothes, later identified by federal investigators as cartel hit men. “There were shots coming from all directions. We were shouting that we didn’t have any weapons, but they kept firing,” says Alejandro, a 19-year-old survivor who, fearing corrupt police and traffickers, asked that his surname be withheld.

The shooting carried on in bursts at different points in the city. Police also fired into a bus of football players, apparently mistaking them for students. When police started shoving people into patrol cars, Alejandro ran for his life. “I was scared of being shot, but I was also terrified of being taken by these policemen,” he says. He escaped to a wooded area and hid in the trees until dawn. “I feel lucky that I am alive. But I think all the time about my companions who were taken. I don’t know what they could have been through or how much pain they could have suffered. This makes me very sad and very angry.”

The motives for the attack remain murky. The mayor’s wife was speaking at an event in the town center and was worried the students would disrupt it, prosecutors say, adding that Mayor Abarca then ordered the police to go after the students. But it is still not known who decided to kidnap the 43 victims or why.

The iguala attack has raised concerns about how many other Mexican towns might have similar problems hidden away, with federal forces investigating the Warriors in 13 nearby towns where the cartel operates. Several officials, including the governor of Guerrero, have resigned as anger over the disappearances grows.

The spotlight on drug violence comes as Peña Nieto attempts to show the world that Mexico is finally open for business, after decades of narco-corruption that hobbled the potential of this resource-rich nation. Since leading the Institutional Revolutionary Party back to office in 2012, Peña Nieto has undertaken a bold program of reforms, including opening up the oil sector, to revive economic growth. To neutralize resistance, he reached across the aisle to the opposition to forge a so-called Pact for Mexico. He has increased the government’s tax intake and introduced education reforms in the face of rowdy protests.

But the success of his reform agenda contrasts with the administration’s sluggish response to the Iguala case. In the immediate aftermath of the attack, Mayor Abarca moved freely around Mexico City, giving radio interviews, before going on the run for a month. Meanwhile, it took eight days for federal investigators to assume charge of the case from their state counterparts. And despite the attention to the case, officials have given scattered and sometimes contradictory information about leads. At one point, they said a detainee had told them the students were dumped in a river, leading to a search that resulted in the drowning of a federal agent. “The series of errors would be funny if it wasn’t so tragic,” says Alejandro Hope, a security analyst and former member of Mexico’s federal intelligence agency.

Peña Nieto himself has held back from visiting Iguala, and it wasn’t until Oct. 29—more than a month after the attack—that he received family members of the missing students at the presidential palace in Mexico City. “I listened to the families who shared with me their sadness and their pain,” he said after meeting them.

The President vowed to find those responsible for the crime. He also promised new measures, including an anticorruption law, to stop mayors and other officials falling under the control of cartels. He is keen to point out that the overall number of homicides in Mexico went down 15% in his first year in office. But the number of killings across the country remains high. Guerrero, Mexico’s most violent state, suffered 2,087 killings last year, giving the state of 3.4 million people a homicide rate of 61 per 100,000. The eastern state of Yucatán, in contrast, has a rate of 2 per 100,000.

Each day that goes by without news of the missing students makes Peña Nieto’s promise to save Mexico seem more hollow and the families grow more desperate. “It has been a nightmare that I can’t wake up from,” says Epifanio Álvarez, the father of one of the missing students. Such grief is shared by the loved ones of the thousands of other victims of cartel violence in Mexico who, in the wake of the Iguala disappearances, are wondering when their country will wake up from its nightmare. 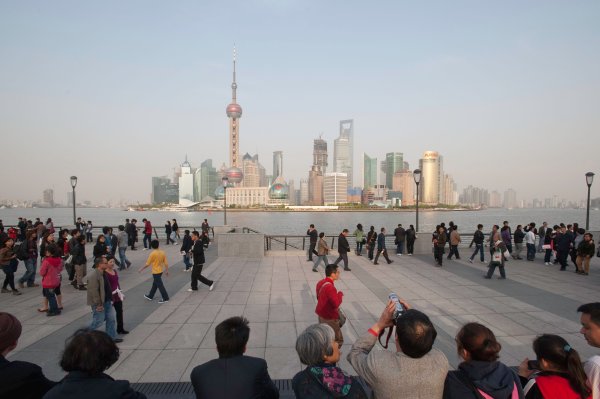 A Shadow Falls on China
Next Up: Editor's Pick