Rogue Stars Are Everywhere You Look

Astronomy 101 tells us that galaxies are massive collections of stars, gas and dust—”island universes,” early 20th-century stargazers used to call them–glowing with the light of hundreds of billions of stars, surrounded by darkness. Sure, the occasional star manages to escape the gravitational bonds of its galactic home, but that’s a rare event.

That’s what astronomers thought, anyway. But two new discoveries have made it startlingly clear that stellar liberation isn’t even remotely uncommon. Last week, a paper in the Astrophysical Journal reported that as many as 200 billion stars are roaming free in a cluster of galaxies known as Abell 2744 some four billion light-years from Earth.

But that pales next to a study just published in Science. An international team of astronomers has found that as many as half the stars in the entire universe live outside galaxies. “It is remarkable that such a major component of the universe could be hiding in plain sight,” writes S.H. Moseley, of the Laboratory for Observational Cosmology at NASA’s Goddard Space Flight Center in Maryland in an accompanying commentary.

“Remarkable” is probably the understatement of the year. But in fact, those billions of quintillions of orphan stars really have been visible all along—in a sense, anyway. Astronomers have had evidence for at least a half a decade, thanks to the Spitzer Space Telescope, that the cosmos is suffused with a faint glow of infrared light whose sources are too faint to identify. Some of it presumably comes from the very first galaxies that lit up after the Big Bang, too small to see individually but producing an overall haze of infrared light.

But that’s just a presumption, and, says James Bock, an astronomer at Caltech and a co-author of the paper, “I was kind of skeptical about the the Spitzer results anyway.” so a group of astronomers led by Caltech’s Michael Zemcov, at Caltech, decided to find out what’s actually going on. They couldn’t make their observations from the ground because the atmosphere itself glows with infraed light. “It’s pretty horrible,” says team member and co-author James Bock, also at Caltech. “So we need to get above the atmosphere—but not for a long time.”

So they sent their instruments up on a sounding rocket, which shot up to about 200 miles in altitude, then parachuted back down. Their goal was not to find the sources of infrared light directly, but rather to see how the intensity of the light varied across a relatively wide swath of sky.

It turned out to vary significantly, with brighter patches spanning 20 times the area of the full Moon. “They’re associated with clusters of galaxies,” Bock says, “but we calculated how much infrared light could be coming from the clusters themselves, and it wasn’t enough.”

Instead, they concluded, it must be coming from stars completely outside the galactic clusters, flung into intergalactic space as galaxies collided, their clashing gravitational fields whipping stars in all directions. The same process presumably send stars flying around within Abell 2744, the cluster described in last week’s announcement—but on a much vaster scale.

The discovery of huge numbers of stars nobody knew about doesn’t necessarily alter our overall view of the cosmos. It doesn’t refute the existence dark matter, or of dark energy, or the Big Bang itself. But it does give astronomers a whole new collection of objects to think about. “If you want to understand the global process of star formation,” says Bock, “you can’t just look at galaxies.” If you do, he says, “you’ll miss all the action.” 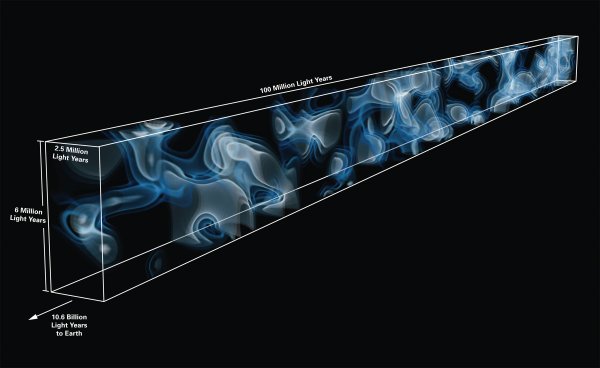 New Picture: The Universe as a Sulky Adolescent
Next Up: Editor's Pick