In your memoir, So, Anyway, you say that what gave you your sense of humor is that your mom and dad didn’t get on. How does that work?

Psychiatrist Robin Skynner said that what makes people creative is having to reconcile different views of the world. For example, in a very cohesive culture like Japan, in an odd kind of way people often are not very creative. But it’s a very harmonious place to live. Whereas if you live in a very individualistic culture, like America is frequently, there’s a creative culture but you tend to have a rather larger prison population.

Was your mother that bad?

She was very, very good at all aspects of running the house. There was no emotional empathy between us. And she was a very neurotic woman who ruled by fear. Dad was scared of her tantrums.

No. I can think of one or two who are very miserable when they’re not on, and they’re very tiring to be with because they have to be funny all the time. But the ones who can relax usually tend to be perfectly nice people. If you look at CEOs, because of the nature of the job, they’re much more likely to be sociopaths than comedians are.

Did you really think of calling Monty Python’s Flying Circus something else, notably The Toad Elevating Moment?

Graham [Chapman] suggested it. It wasn’t one of the better titles. I liked A Horse, a Spoon and a Basin, which was Michael’s suggestion.

You’re hilariously horrible about [director and Python member] Terry Gilliam in this book. Do you not get on?

He’s always been much, much ruder about me than any of the other Pythons. I didn’t see any reason, morally, to hold back. I was particularly annoyed by a remark he made about my wife when I got married for the fourth time, although he’d never met her.

Does anything reliably make you laugh?

The sad thing about comedy is that if you spend 50 years doing it, you do finish up knowing most of the jokes. And if you don’t know the exact joke, you know something pretty close to it. So there isn’t the sense of discovery that you get when you were younger.

In the book, you express regret that we can no longer make fun of certain groups.

Political correctness started out as a very good idea. But it got latched onto by people who hang onto a small number of truths. In my stand-up, I’ll make jokes about Germans, Canadians, the English and the French–which Americans particularly enjoy. And then I say, “There’s this Mexican joke.” And the place freezes. Why is everyone uncomfortable? Is that because the Mexicans need particular protection? Are they not capable of looking after themselves? There is a lot of condescension in it.

But where’s the line?

You can’t be absolutely clear about where a line should be drawn. You can put jokes along a continuum from nasty and paranoid to jokes about the human condition. That’s the best type of humor–we’re all in it together. All jokes are critical of human behavior.

You called a recent show the Last Chance to See Me Before I Die Tour. Are you overpromising?

Mum died at 101, and Dad killed himself with cigarettes. But I am the most unfit now that I’ve ever been in my life. When you’ve got $20 million to pay in alimony and you’re in your 70s, you have to do an awful lot of work. You have to go onstage every night and say the same thing that you said last night.

You’re on your fourth wife. Is this the sticker?

Yeah, I think so. You probably want me to be funny, but I really like her. 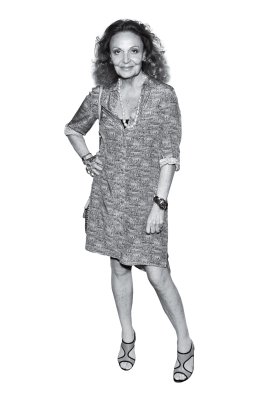 10 Questions With Diane Von Furstenberg
Next Up: Editor's Pick