Nobel laureate Aung San Suu Kyi is not happy with the pace of democratic change in Burma, officially now known as Myanmar. On Wednesday, the Nobel Peace Prize winner gave a press conference to denounce the “stalling” reform process.

“The U.S. government has been too optimistic,” she said. “What significant reform steps have been taken in the last 24 months?”

This remark comes days before U.S. President Barack Obama’s visit to Rangoon, and after talks to reform the nation’s much maligned constitution broke down between Suu Kyi, Burma’s powerful military generals, the current military-backed government and various ethnic leaders.

The constitution bars Suu Kyi from becoming President in next year’s elections because she was married to a British man and has two sons who are foreign citizens. It also guarantees 25% of legislative seats to military appointees. Since more than 75% of lawmakers are required to enact any constitutional change, this gives the generals a de facto parliamentary veto.

Talks aimed at amending these provisions, which were shamelessly included with the sole purpose of barring Suu Kyi from the nation’s highest office, have gone nowhere, and the 69-year-old is attempting one last throw of the dice — appealing to Obama to put pressure on current President Thein Sein, himself a former junta general.

“Democratic reform would not be successful alone with the parliament,” Suu Kyi told assembled media.

Nobody would argue against Burma’s current constitution desperately needing revision, or pretend that reforms haven’t stalled. In fact, when Obama returns to Burma next week, he will find one of his few foreign policy successes in tatters.

“The hope and the optimism we had in 2012, when the country was opening up, has all been squandered,” Aung Zaw, managing editor of the Irrawaddy magazine, tells TIME, lamenting a “backsliding reform process” akin to watching “a train wreck in slow motion.”

Even so, Suu Kyi’s condemnation is curious.

It comes after her steadfast refusal to criticize the military or the government for myriad human-rights abuses. In Burma’s west, for example, more than 100,000 Rohingya Muslims languish in squalid displacement camps, but Suu Kyi repudiates evidence-based allegations of ethnic cleansing by Human Rights Watch and instead calls the crisis an “immigration issue.”

In northernmost Kachin state, civilians face “attacks against civilian populations, extrajudicial killings, sexual violence, arbitrary arrest and detention, internal displacement, land confiscation, the recruitment of child soldiers, forced labor and portering.” That’s been documented by the U.N., but Suu Kyi has refused to condemn those atrocities. Her silence is so pointed that 23 local NGOs signed an open letter of protest.

Other causes of concern, like the 10 journalists jailed this year on the flimsiest of pretenses, are brushed aside with platitudinous references to the “rule of law.” Meanwhile, Suu Kyi’s own Rule of Law Parliamentary Committee has achieved “nothing at all,” says Aung Zaw.

In fact, when a high-level delegation from Human Rights Watch came to Burma earlier this year for landmark talks, they met with senior government officials including the President but were snubbed by Suu Kyi.

And that’s not all. Suu Kyi’s baffling behavior goes beyond the area of human rights.

In April 2013, peaceful protesters blockaded a Chinese-owned copper mine near Monywa, around 450 miles north of Rangoon. The police attacked them using white phosphorous, leaving dozens with horrific burns, including traditionally sacrosanct Buddhist monks.

Suu Kyi headed the investigation commission but found that the mine must continue operations or else risk “hurting Burma,” despite the fact that it is desecrating the environment, was set up without scrutiny by the junta, and provides no jobs for local people. In unprecedented scenes, the National League for Democracy (NLD) leader was harangued by furious locals.

Suu Kyi has certainly experienced enormous personal sacrifice. Since returning to her homeland in 1988, she has spent 15 years under house arrest, not even being able to see her beloved husband Michael Aris before he died.

But this is also why her current aloofness is so painful to behold.

“The NLD under her leadership has had big question marks,” says Aung Zaw, “and they misread the whole situation.”

In August 2011, Suu Kyi met Thein Sein for the first time, formally marking her belated return to mainstream politics. The following April, she and 42 NLD colleagues were elected to parliament in a landslide amid jubilant scenes.

The common perception among analysts is that some deal was struck to allow Suu Kyi to stand for election in exchange for muting her criticism of the generals. The presumption was that reforms would take baby steps forward. But, three years on, there has been no progress, and she is partly culpable.

When Suu Kyi finally gave her Nobel acceptance speech in June 2012 — the prize having been originally bestowed in 1991 during a period of house arrest — she said that “receiving the Nobel Peace Prize means personally extending my concerns for democracy and human rights beyond national borders.”

But her present recalcitrance suggests that her own political career may be more important, even if we accept the mitigation that it is for some vague greater good.

“There is no version of pragmatism that would make silence on human-rights atrocities defensible,” says Smith. “These are some of the most serious human-rights violations that can be committed.”

Admittedly, Suu Kyi has always said she is a politician, rather than a human-rights defender. But the truth today is that she is pretty awful at both. 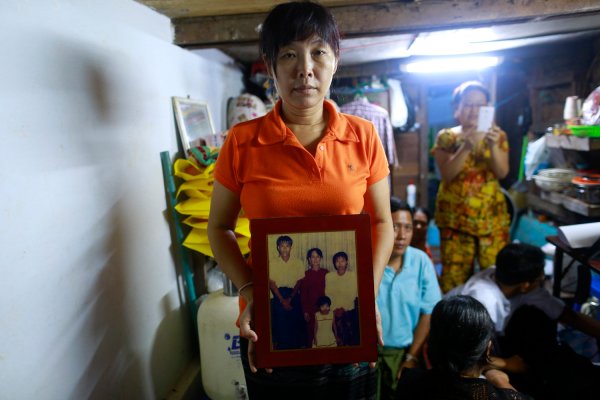 Death of Journalist in Burma Shows Failure of Reform
Next Up: Editor's Pick