A hostess holds a remote of a Playstation 4 at the Sony booth during the China Joy fair in Shanghai on July 31, 2014.
Johannes Eisele—AFP/Getty Images
By Ben Taylor/FindTheBest

With high-profile product launches and billions of dollars at stake, the holidays have a habit of separating the winners from the losers, the booms from the busts. With that in mind, let’s explore the best-and worst-case scenarios for five hot holiday products.

For each scenario, we’ll start things out realistically, then get a bit crazier as we go along.

Following its record-breaking launch, the iPhone tears through the holidays, setting sales records in over 30 countries. Millions of Android users abandon their 7-inch phablets for the iPhone 6 Plus. As usual, Apple makes untold billions, but it also grabs back five points of smartphone market share on the strength of the gold iPhone 6, which rapidly becomes China’s best-selling phone. Samsung CEO Boo-Keun holds an emergency press conference to assess the damage, then steps outside the room to take a phone call. The next day, a hastily snapped photo confirms Boo-Keun took the call on an iPhone.

After two years of stagnant sales, the iPad Air 2 reinvigorates the tablet industry in one scorching Black Friday weekend. Stubborn first- and second-generation iPad owners finally decide to upgrade their four-year-old devices. A Louisiana woman draws blood after cutting herself on the iPad Air 2’s corner, but Apple successfully parlays the accident into its new holiday marketing campaign, “Thinner than a Pencil, Sharper than a Knife.” Meanwhile, Google’s new Nexus 9 tablet flops.

Sales for the new iPad Air 2 mirror the launch event itself: tepid, restrained, unexciting. Google wins the holiday quarter with its HTC-made Nexus 9, leveraging a $200 price tag and a series of rock-bottom-price promotions. Slaves to saving money, consumers opt for the outdated iPad Mini ($249) instead of the flagship Air 2 ($499), then clog Apple Stores across America after they realize how terribly the device runs iOS 8. One man even buys a Microsoft Surface Pro 3 out of spite. Three days after New Years, a leaked Tim Cook email signs off with “Let’s face it, tablets are a lost cause.”

The Flagship Tablets from Google and Apple | FindTheBest

With the Wii U still stumbling and the Xbox One still Xboxing, the PS4 cements its status as Best Console of the Current Generation. Mothers around America ignore a “Nintendo is for families” campaign, opting for PS4-exclusive Little Big Planet 3 instead. Swept up in a tide of Sony holiday success, Activision agrees to make the next three Call of Duty games exclusively for PS4. With the original Halo soundtrack playing on low-volume, Microsoft CEO Satya Nadella cries himself to sleep.

Microsoft’s Xbox One price drop (now $349) winds up the most brilliant move of the holiday season, tipping the scales from Sony to Microsoft. Even the lowly Wii U—emboldened by the release of the latest Smash Bros—beats the PS4 in November. Scrambling to salvage the situation, Sony America CEO Michael Lynton pressures star developer Naughty Dog into pushing out Uncharted 4: A Thief’s End before Christmas. The game is an unplayable, unfinished mess, instantaneously defiling the series’ memory and tarnishing a once-great developer brand. Naughty Dog abandons Sony. Meanwhile, Microsoft buys Nintendo.

The Microsoft Band shakes off early bad reviews—“it’s awkward and inaccurate”—to become a modest holiday success. Tech geeks, couch potatoes and retired high school coaches across the nation collectively decide “if there’s one Microsoft product I’ll take a risk on, this is it.” Meanwhile, Fitbit has another scandal. The Moto 360 gets recalled. Everyone remembers the Apple Watch won’t come out for another six months, and even then, the mid-range models might cost thousands. The Microsoft Band goes on to win the holiday season by default.

After launching accidentally at 10 p.m. and generating a slew of confused, frustrated reviews, the Microsoft Band roll-out only gets worse. Customers report the band is waking them up, only to tell them they need to sleep better. Executive Vice President Stephen Elop is caught wearing something from Nike. Even former CEO Steve Ballmer is overheard praising the Apple Watch’s design at Staples Center. By December 1st, paltry Microsoft Band sales dissolve into nothing, and Microsoft abandons the wearable market for good. “At least we still have the Surface Pro 3,” Nadella ad libs on a Sunday talk show. Nine hundred miles away, Apple execs play the clip on repeat while celebrating record-breaking iPad Air 2 sales.

After a bumbling first year, the TV streaming stick finds its perfect manufacturer in Amazon: a company known for cheap prices, convenience and world-class distribution. The sneaky little device sits in Amazon’s top-selling electronics slot for the entire holiday season, quietly winning over tens of thousands of new Prime subscribers in the process. Apple TV users, tired of its clunky user interface and terrible controls, sell their old boxes before snapping up Amazon’s latest stick. Despite terrific sales, the product doesn’t actually make much profit, but the company’s shareholders don’t care (as usual). Amazon stock soars.

After pouring years of deals and development into the Amazon Fire TV service, a series of harsh realities hit. People don’t want to play games on an Amazon Fire TV or Stick; they want to play on a legitimate game console. HBO might have given Amazon the rights to play classic series like The Wire and The Sopranos, but HBO is launching a standalone subscription service anyway, with more current shows and wider availability. Google Chromecast does the same thing as the Fire TV stick, but retails at a lower price, and doesn’t require an Amazon Prime subscription for all its best features. Customers pass on the Fire TV stick. Jeff Bezos calls an emergency shareholder meeting. Skeptical of Bezos’ latest pet project, Amazon’s investors demand the company “wake up and actually turn a profit.” Later that night, Bezos pens an open letter on Amazon’s homepage titled, “Turn a profit? Who do people think we are? Apple?” 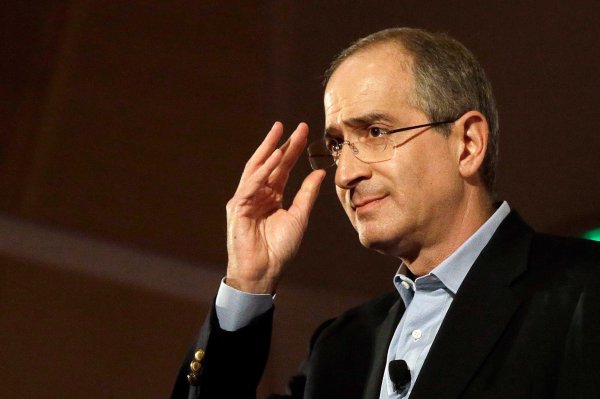