We’ve long known that yoga offers a host of physical benefits, including increased flexibility, a healthier weight, and possibly even stronger bones. But many yogis also practice for the less visual effects of the exercise. Yoga holds the power to transform our minds as much as it does our bodies. Here, some of the mental benefits of yoga.

Yoga may help those with bipolar disorder.

New research published in The Journal of Psychiatric Practice suggests that yoga could help people manage bipolar disorder. The survey asked a group of more than 100 people with the mental disorder, who also practice yoga, to rank how the practice affects their lives. Many deemed it beneficial to mental health, and one in five called yoga “life-changing.” While it’s important to emphasize that this was a self-reported survey, it’s possible that the sense of Zen yogis tout could do a lot of good for those living with bipolar disorder.

Those with bipolar disorder aren’t the only ones who can reap the benefits of yoga. The Mayo Clinic boasts yoga’s power to fight stress and improve moods for all. And the practice can offer a moment to escape from our busy lives. Research shows that mindfulness-based stress reduction, like that at yoga’s core, can help lower anxiety and stress. In a study at the University of California, Los Angeles, participants who practiced yoga for just 12 minutes every day for eight weeks showed a decrease in their immune systems’ inflammation response. When we’re overstressed, our bodies lose the ability to regulate our inflammatory response, which can lead to a long list of health problems, including a greater risk of depression. By lowering our stress levels, we can also lower the risk of depression.

(MORE: One Sneaky Trick to Boost Your Mood)

Not only do poses like downward dogs relax and de-stress, but they may actually increase brain function. A short, 20-minute session of Hatha yoga might improve focus and information retention, according to the University of Illinois. So the next time your head’s feeling foggy, consider ditching the energy drink and opting for some time on the mat instead.

(MORE: Why Your Sibling is Good for Your Health (According to Science))

It can increase happiness.

Ever notice how strong, centered and happy you feel after a yoga session? It turns out it’s not all in your head. Research shows that the simple act of living in the moment boosts moods. On average, we spend almost half of our time planning ahead or contemplating the past, and staying in the present is often easier said than done. But yoga helps us focus on the present by providing both physical and mental exercises. That’s why yoga instructors often encourage reflection and living in the moment during class, rather than simply running through the poses. Yoga’s mental aspect brings a whole new meaning to the phrase “blissing out.”

(MORE: Why Dogs Are Good for More Than Just Snuggling) 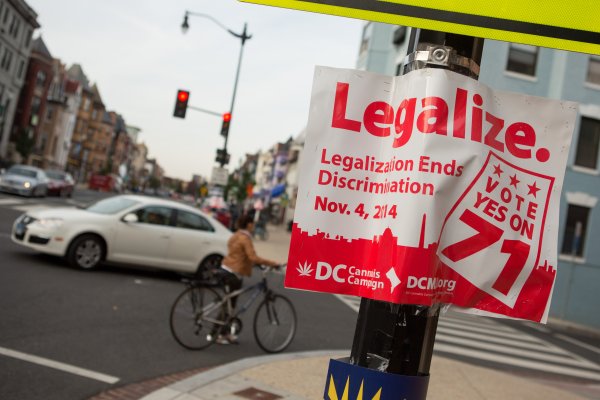 Legalize Pot? You Must Be High
Next Up: Editor's Pick