Medicaid Expansion Likely Off the Table in 5 States

President Obama may not have been on the ballot on Tuesday, but Obamacare was. The decision to expand Medicaid coverage under the Affordable Care Act was an issue in gubernatorial races across the country, including six where party switches could have meant insurance coverage for at least a million Americans.

But it was not to be. On Tuesday, voters cast their ballots in favor of Republican governors in five of those states.

Voters in Maine, Wisconsin, Kansas and Georgia backed candidates who do not support accepting the federal money to expand Medicaid. In Florida, they re-elected Republican Gov. Rick Scott, who paid lip service to the idea but added enough caveats to put it in doubt.

The one exception could be Alaska, where Independent Bill Walker leads against Republican incumbent Sean Parnell.

And after Tuesday’s rough night for Democrats nationwide, one state may even drop off the list. Arkansas was one of 27 states and D.C. to expand access to coverage under the Affordable Care Act, but newly elected Gov. Asa Hutchinson may reverse course. His campaign website says he will assess the benefit and long-term costs of the states expansion program, and “determine whether the program should be terminated or continued.”

Ron Pollack, executive director of health care reform advocacy group FamiliesUSA says though the “incremental opportunities” for expansion they were hoping would result from elections are essentially dashed, he believes there will be continued progress in states.

“I think we’re going to see a number of states get serious about getting to yes about the medicaid expansion,” Pollack says. “The task in front of us is not a whole lot different than it was 24 or 48 hours ago.”

Expansion is still likely in some states including Tennessee, Wyoming, and Utah, where governors have signaled real interest in expanding coverage. Re-elected Republican Gov. Matt Mead in Wyoming has shifted his views on accepting federal funds for Medicaid, which in 2013 he all-out rejected. 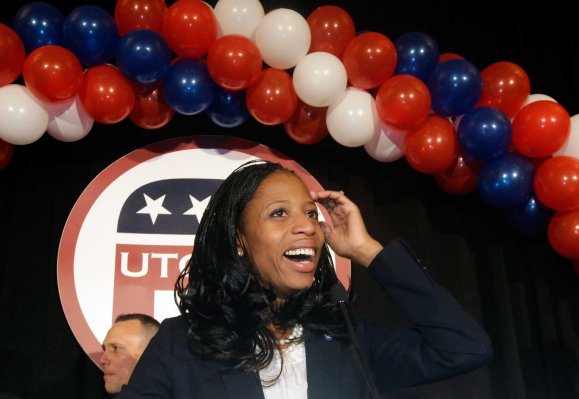 Another Year of the Woman? Not Exactly
Next Up: Editor's Pick