Something was about to happen. But, 25 years ago, it wasn’t clear just what that would be.

There had been hints of a thaw in the Cold War. There were reasons to think that, after nearly three decades divided, Germany might be ready to reunite. There had also been plenty of false alarms. Ken Olsen, who was a stringer for TIME based in Bonn, Germany, had only been in the country a few months and barely spoke German when he was summoned to have dinner with the chief of the magazine bureau, James Jackson. He was told to go home and pack his bags for Berlin. Sure, nobody knew what was about to happen — but somebody had to be there just in case.

That was Monday or Tuesday night, recalls Olsen, now an editor at the Los Angeles Times. When he reached Berlin, there was just as much confusion. He attached himself to some friends who were with the Associated Press German Service and, for about a day, they waited.

Until Thursday night. That evening, an East German official giving a televised press conference announced that the government had decided to allow citizens to cross to West Germany, through the Berlin Wall. He was asked when the change would come into effect. “I remember he said sofort,” Olsen recalls. “Immediately.”

The announcement was an offhand one, not presented as a world-changing decision, but everyone watching knew what it meant: if the Berlin Wall wasn’t keeping East Berliners on their side, which was the whole reason it existed, it might as well not even be there. The concrete was as strong as ever, but, if the announcement turned into reality, the Berlin Wall had effectively crumbled.

Olsen and his friends ended up at Checkpoint Charlie, the crossing point in the American sector of West Berlin, where they waited with the crowd of West Berliners who had gathered to see what would happen. Something had happened, but even the people who were there at the scene were still confused. The border guards had heard what had been said on TV too, and at midnight they began to let the people through, to be greeted by jubilant West Germans handing them money and patting them on the back. “They were screaming, Tor auf! Tor auf! Open the gate!” Olsen says. “At one point the crowd was throwing a hat — I remember this too, it’s funny the things you remember — a hat was coming back and they were picking it up and throwing it through the crowd and I asked Jurgen, the AP guy I was with, what is that? He said, it looks like a border guard hat.” One couple Olsen met hadn’t even intended to come over to the Western side; they said they had to get back, as they had only meant to go out for a walk and their child was at home sleeping.

Though the crowds were still celebrating, Olsen went back to his hotel to file his story. The lobby was filled with East Germans — they were snatching up all the rental-car brochures to read, he recalls, and waiting for stores to open so they could take a look before going home — but he went upstairs to his little TRS-80 computer and modem. He calculated that there would only be about two days before TIME had to go to the printer, so he began sending a stream of consciousness report of his impressions from that day. “I was a little worried about it,” he admits. “It wasn’t a very coherent file.”

Meanwhile, in the U.S., Berlin’s confusion appeared to be contagious, even as television reports started to come in. It was the afternoon, recalls Michael Duffy, now TIME’s Deputy Managing Editor, who was then at the White House with President Bush.

As Duffy’s report on the event made clear, Bush was calm and careful not to seem to excited by an event that could have, at that point, gone in any direction. Just as importantly, Duffy recalls, Bush knew that whatever had happened was progress — and that back-patting from the West could have undone it. “We’d spent billions and billions of dollars, we’d gone to the moon, we’d built three different kinds of nuclear weapons, an entire nation and two generations were involved in this effort, and here it was, we were winning not with a bang but with a whimper, quietly on a November afternoon,” he recalls. “There wasn’t anything anyone could do, under Bush’s plan. We couldn’t stand up and say, ‘Yeah, we won!’ We had to sort of sit there on our hands, because we didn’t want to reverse the tide. But that was an amazing piece of forbearance by Bush.” Though people on the right and the left alike criticized the President for not celebrating the fall of the Wall, hindsight vindicated the decision to, as the president put it, not gloat.

It took a day before the President — as TIME phrased it when using Duffy’s report from Washington — “realized he had badly underplayed a historic event.” In a speech that day, he spoke of how moved he was by the photos coming out of Berlin at that time.

“1989 was a year no one expected to be very interesting,” Duffy says, “and it turned out to be just revolutionary.”

By that time, clarity had come to Germany as well. Ken Olsen, so worried that his report from the scene would be uselessly incoherent, had begun getting questions from George Church, who wrote the magazine’s cover story on the fall of the wall. He knew then, he says, that he’d succeeded in what he had set out to do: being there, just in case, to see what would happen.

Church’s article, which used Olsen’s and Duffy’s reporting, was that week’s cover story.

“The next day it was this bright, clear, blindingly sunny day,” Olsen recalls. He went out to one of the crossings, where somebody had laid planks for East Berliners to use to cross the sand of the death strip and move from East to West. A crowd of older West Germans stood there, applauding as their neighbors came over. Though Olsen says that lots of the rest of that time is fuzzy, 25 years later, he remembers that day like it was yesterday. “I think I realized at that point, This is done. I don’t know what’s going to go on with reunification, but the wall is history,” he says. “It’s over.”

Read more about the fall of the Berlin Wall here in TIME’s archives, where the Nov. 20, 1989, cover story is now available. 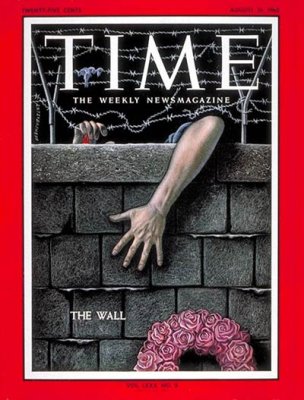