Outside Spending Propelled Governors to Wins

Nearly all of the governors elected Tuesday dominated the airwaves in TV ads before voters went to the polls, bolstered by their campaign war chests and outside groups that advertised on their behalf.

Candidates outspent on TV ads won in only seven of the 32 races called as of early Wednesday. However, in six of those cases, the winners were incumbents, confident that they didn’t need the help of so many ads.

Of the nearly $550 million spent on ads targeting governors on the November ballot, more than 55 percent supported the winning candidates, according to a Center for Public Integrity analysis of preliminary data from media tracking firm Kantar Media/CMAG.

The spending also helped Republicans pick up four governorships, while Democrats flipped only one, leaving Republicans holding the reins in at least 30 states nationwide.

The country’s 36 governors’ races accounted for nearly 70 percent of the $832 million spent on television ads aimed at shaping the outcomes of state-level races this cycle, about $100 million more than was spent on the same number of U.S. Senate seats up for election. Only the Wyoming governorship did not have ads airing in markets captured by Kantar Media/CMAG.

The spending this cycle represents a 10 percent decline from 2010, when an estimated $921 million was spent on TV ads in state-level races, including $689 million on governors’ races.

At least 16 gubernatorial winners and supporting groups outspent their opponents by more than $1 million. In some states, such as Florida, the successful candidates and their supporters outspent their rivals by huge margins.

Republican Gov. Rick Scott and the groups backing him spent $61 million — the most spent supporting any single gubernatorial candidate this cycle — compared with the $34 million spent by Democratic candidate and former Gov. Charlie Crist and his allies. The heavy spending also made the Florida contest the most expensive TV ad war in the country this election.

Other top spenders included Illinois Republican Bruce Rauner, who, along with his allies, spent almost $21 per vote on his way to unseating Democratic incumbent Gov. Pat Quinn. Quinn and his supporters spent about $22.75 per vote.

Rauner’s biggest backer was Rauner. The candidate donated at least $26 million to his campaign, the most of any self-funded candidate this election.

Meanwhile incumbent New York Democrat Andrew Cuomo spent $14.75 for each vote in his successful bid to retain the governorship.

In a race that attracted a lot of national attention, Texas Attorney General Greg Abbott, a Republican, beat Democratic state Sen. Wendy Davis handily after he outspent her on the Lone Star State’s airwaves $24 million to $15 million.

In Pennsylvania, Democrat gubernatorial candidate Tom Wolf unseated unpopular incumbent Gov. Tom Corbett, a Republican, after Wolf and his allies outspent Corbett and his supporters by nearly $10 million on the airwaves — the same margin that kitchen cabinet magnate Wolf donated to his own campaign. He was the sole Democrat to pick up a governor’s mansion.

However one of the biggest upsets of the night was in largely blue Maryland, where Republican challenger Larry Hogan beat Democratic Lt. Gov. Anthony Brown despite being outgunned on TV ads.

Up until even the last few weeks of the race, Brown was expected to cruise to an easy victory. What’s more, Brown and the groups supporting him spent $13.5 million on TV ads, compared with the $5.8 million spent by Hogan and his allies.

Todd Eberly, a political science professor at St. Mary’s College of Maryland, said the race boiled down to what the ads said, rather than how much was spent airing them.

“The economy and taxes were nearly paramount in the minds of Maryland voters this year,” he said. “Hogan really talked about nothing but that issue and Brown avoided it.”

Voters likely conflated independent groups’ ads — 86 percent of which attacked Hogan, according to the Center’s analysis — with those run by Brown himself, Eberly said.

“To the extent that advertising registered with anyone in this election, what registered was that Brown was running a very negative campaign, and I think that hurt him,” he said.

Such independent groups accounted for a quarter of the television spending in governors’ races, often providing the margin that helped boost the winning candidates to victory.

Not counting parties or candidates themselves, the top spending independent groups were the Republican Governors Association ($28.5 million) and the Democratic Governors Association ($17.2 million), national committees that spend and raise millions to elect governors from their parties. The groups also heavily contributed to other independent groups, that spent nearly $11 million on the Democratic side and more than $13 million on the Republican side.

All told, the Republican group was more successful than its Democratic counterpart; of the 21 states where the RGA or its affiliates spent money, Republicans won in 16 races.

By comparison, six out of the 11 Democrats backed on the airwaves by the Democratic group and its affiliates lost.

“It’s a Republican-leaning year, and it’s a good national trend for Republicans that is bleeding down the ballot to governors’ races,” said Kyle Kondik, a political analyst at the University of Virginia’s Center for Politics.

Meanwhile former New York City Mayor Michael Bloomberg’s Independence USA PAC, which backed political moderates, found success in Michigan, where it backed incumbent Republican Gov. Rick Snyder. But it struck out in Maryland, where it backed Brown, the Democrat. The governorship of Connecticut, where the group backed Democratic Gov. Dan Malloy, had not been called as of early Wednesday.

In Florida, Scott won re-election with help from more than $10 million in ads sponsored by Let’s Get to Work, a political action committee with ties to Scott though not technically part of his campaign.

In fact, neither Scott nor Crist was responsible for much of the $94 million spent on airtime in the race, the most expensive in the nation. The state’s two major political parties accounted for a whopping 76 percent of the ad spending — $72 million. Another $17 million came from other independent groups, such as Steyer’s NextGen Climate Action Committee, the National Rifle Association and other Florida-specific political organizations.

In Illinois, such assistance from outside groups helped Democratic Gov. Pat Quinn nearly match Republican challenger Bruce Rauner, who tapped his wealth for his campaign.

Worth hundreds of millions of dollars, Rauner took advantage of a fortune made in the private equity industry to unseat the vulnerable incumbent, whose popularity was waning. Quinn fought back with help from the labor-funded Illinois Freedom PAC to almost match Rauner’s camp, yet still lost.

“When one candidate starts spending a lot of money on ads, the other side says, ‘We have to match them,’ and it becomes an arms race,” said Brian Gaines, a political science professor at the University of Illinois.

By the day before the election, both sides had each spent just over $36 million on TV ads, making the race the second-most expensive governor’s contest.

In Arizona, former ice cream executive Doug Ducey was buttressed by roughly $4 million in ads sponsored by outside actors, which added to the $5.7 million worth of airtime bought by his campaign. That helped the Republican dominate the airwaves and beat Democratic nominee Fred DuVal.

In Kansas, Sam Brownback was one of at least 15 incumbent Republican governors who won re-election. Aided by at least $5 million dollars in TV ads produced by outside groups, Brownback beat Democratic challenger and state legislator Paul Davis in a tight race. For his part, Davis was buoyed by more than $3.7 million in spending by outside sponsors.

So-called “outside spending” groups have gained significant traction since 2010, the last year in which a comparable number of governorships were in play and the first election cycle after the Supreme Court’s Citizens United v. FEC ruling, which removed limits on such political spending. Groups independent of candidates and parties sponsored 25 percent of all ads in gubernatorial races this cycle, while outside organizations made up less than 13 percent in 2010.

And the vast majority of these ads — more than 71 percent — attacked candidates, while campaign-endorsed messages were mostly positive.

“Outside groups are always going to do more negative spending than candidates,” said Justin Levitt, a professor at Loyola Law School in Los Angeles. “It diffuses the blame for a negative message.” 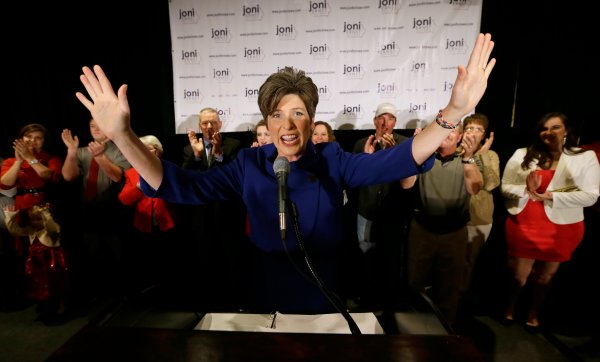 How Republicans Did It
Next Up: Editor's Pick