The Challenge for the New Republican Majority

Republicans scored a decisive victory Tuesday night, winning at least 52 seats to gain control of the Senate for the first time since 2006. On a banner evening, the GOP reached its magic number around 11:30 p.m., knocking off Democratic incumbents in Arkansas, Colorado and North Carolina and staving off challenges in key battleground states like Georgia and Kansas.

With the win, Republicans exorcised the demons of the last two election cycles, when they fumbled chances to retake the upper chamber. The decisive victory extended to governor’s races, where the GOP beat back hard-fought challenges in Wisconsin, Florida and Michigan and picked up a seat in Illinois. And the party padded its caucus in the House, where they appeared on course to earn the largest majority since the 1920s.

MORE: See all the election results

Of all the victors, the night belonged to Sen. Mitch McConnell, who began it by celebrating a hard-fought Senate victory in Kentucky and wrapped it with the knowledge that he would be the chamber’s next majority leader. “We do have an obligation to work together on issues where we can agree,” McConnell said at his victory party in Louisville, his wife beaming by his side. “Just because we have a two-party system doesn’t mean we have to be in perpetual conflict.”

For McConnell, it was a moment to savor. The triumph was the realization of the Kentuckian’s lifelong ambition to become majority leader, as well as the culmination of his six-year plan to reclaim power in the Senate by thwarting Barack Obama’s legislative agenda. McConnell was also a chief architect of the quest to crush the Tea Party in 2014 primaries, a crusade which yielded the best roster of Senate candidates the party has boasted in recent memory.

Yet for all this success, the midterms may prove a pyrrhic victory for the Republican Party. The GOP sank a billion or more dollars into winning in 2014, but in doing so failed to fix the demographic challenges that threaten the party long into the future. In some ways, the triumph only deepened the problem. Republicans relied on a larger-than-ever share of white voters to win key races, but their performance with crucial constituencies—such as the Hispanic voters and young women that remain pillars of the Democratic Party—remained dismal. What’s more, the territorial gains the party notched this month are likely to be reversed in two years, when both the political map and the composition of the electorate will favor their opponents.

McConnell’s test now is to keep a caucus of soloists singing from the same songbook, and to demonstrate, after eight years in the minority, that Republicans are ready to govern as the party turns its sights to the 2016 presidential campaign. But Tuesday night’s victory may make the task harder.

After six years of opposing Obama’s agenda, it now falls on McConnell to craft one of his own. The transition to the majority won’t be easy. Unified Republican rule on Capitol Hill will heighten expectations of radical change.

But with Obama in the White House and Senate Democrats able to filibuster Republican priorities, the GOP has little shot at breaking the gridlock that has reigned in Washington. As majority leader, McConnell will have to unite a fractious caucus split between moderates who want to prove the GOP can govern and Tea Party legislators who interpret unified Republican control of Congress as a chance to fulfill the ambitions of the base. That means more votes to repeal Obamacare, more investigations into the White House, and the kind of austere fiscal policies destined to meet the president’s veto pen.

In the meantime, the fissures within the GOP look destined to widen. The Senate’s Tea Party faction includes several members who are fluent in the language of rebellion but have no patience for the dry prose of bipartisan governance. That includes members like Sen. Ted Cruz, whose loyalty is not to McConnell but to his own higher ambitions.

Cruz, the Texas freshman who is preparing for a prospective presidential bid, would not say whether he’d back McConnell in an interview with the Washington Post before the election. He pledged to try to pull the majority rightward, and promised a series of politically charged hearings “looking at the abuse of power, the executive abuse, the regulatory abuse, the lawlessness that sadly has pervaded this administration.” McConnell, along with House Speaker John Boehner, will have to satisfy constituents eager for an aggressive brand of conservatism without hobbling the prospects of the party’s eventual 2016 presidential candidate.

The first test will come this month, when Obama is expected to take executive action to rewrite part of U.S. immigration law, a move that will incense GOP voters. The Kentucky Senator has brushed aside the suggestion that the looming executive action on immigration could spark another government shutdown. And McConnell has expressed openness to sitting down with the President and searching for common ground, harkening back to his role in passing the Budget Control Act after the 2010 midterms and the fiscal cliff deal that extended the Bush-era tax cuts.

But the immigration debate is also a microcosm of how Republicans may have sacrificed their 2016 chances for a short-term victory. For the 2014 electorate, the issue’s politics were simple for Republicans: block reform at all cost. Opposing “amnesty” was a galvanizing issue to the GOP midterm base. But in 2016, McConnell will be forced to balance his members’ promises his cycle with the needs of his caucus and party to attract voters that reflect the changing electorate. “If they don’t move on immigration, 2016 will be a wave in our direction,” predicts one senior Democratic Party official.

Republicans realize that narrowing the gap with Hispanics, the nation’s fastest-growing demographic group, is vital to their long-term viability. In the weeks after a 2012 defeat that few in the party saw coming, the Republican National Committee commissioned an “autopsy” into what went wrong, identifying problems from messaging to infrastructure. A blue-ribbon panel generated some simple, sage advice—with an emphasis on expanding the party. “We must embrace and champion comprehensive immigration reform,” the group of party veterans wrote. “If we do not, our Party’s appeal will continue to shrink to its core constituencies only.” The GOP went on to do just that, campaigning hard against immigration reform in a bid to turn out the older, whiter midterm electorate.

Campaigns are a science, and while they’re finally experimenting, the party still hasn’t quite found the formula that’s proven so successful for Democrats. This year the Republican National Committee created permanent field offices and deployed new digital tools, but is still a generation behind their opponents, according to operatives in both parties. “I think we’ve taken a big step in the right direction on tech,” says longtime Republican strategist Scott Reed. “But I’m not saying we’ve bridged the gap.” Says a Democratic official: “They are seeing what we built in 2012 and are trying to replicate it. They may get close, but they don’t have all the knowledge and data we gathered over the eight years prior.”

Democratic groups also maintain closer coordination and organization among their outside groups, with a well-oiled election machine that includes outside groups like House Majority PAC and Senate Majority PAC, midterm powerhouses that reserved vast sums of cheap airtime months before GOP opponents. Despite Tuesday’s losses, Democrats ran disciplined campaigns that nearly prevailed in a year when they were buffeted with headwinds from a bad map and a second-term president with low approval ratings. The Democrats won a tough campaign in New Hampshire, where Senators Jeanne Shaheen fended off a spirited challenge from a talented candidate despite a spending onslaughts to prevail in a difficult climate.

On the GOP side, jumbled messages and duplicative efforts are not yet a thing of the past. “We have to get better at targeting messages to specific voters,” says Tim Miller, the executive director of American Rising, a GOP research firm. “We made some progress this cycle, but I still think we could have done a better job–just talking about (America) Rising—taking our research, taking our content and matching it with voters who would be moved by it. That’s something we want to do next cycle.”

MORE: Your guide to the 2016 GOP primary field

As they uncorked the champagne, many Republicans cautioned their compatriots not to misinterpret the results of an election fought on favorable footing: a series of contests where vulnerable Democrats in red states were forced to contend with angry midterm voters, in an anti-incumbent mood, with a presidential millstone hung around their necks.

“Republicans aren’t being given a mandate tonight. They are being offered an opportunity,” says GOP strategist Alex Castellanos. With some exceptions, he added, the GOP remains “a wounded confederation of visionless and message-less souls. But at least we have made sufficient progress to acknowledge that.”

It’s up to McConnell to continue to the progress. The incoming majority leader has a familiar set of legislative priorities lined up: approving the Keystone Pipeline, repealing the medical device tax and scuttling the individual mandate in the Affordable Care Act—plus a push for tax reform, trade agreements, and an effort to overhaul the chamber’s procedures and tighten its light work schedule.

But for McConnell—the man who boldly declared that his top priority was to make Barack Obama a one-term president—goal number one remains winning elections. He did it on Tuesday night. Repeating the feat in two years will be a whole lot harder.

Read next: McConnell: No Shutdowns, No Full Obamacare Repeal 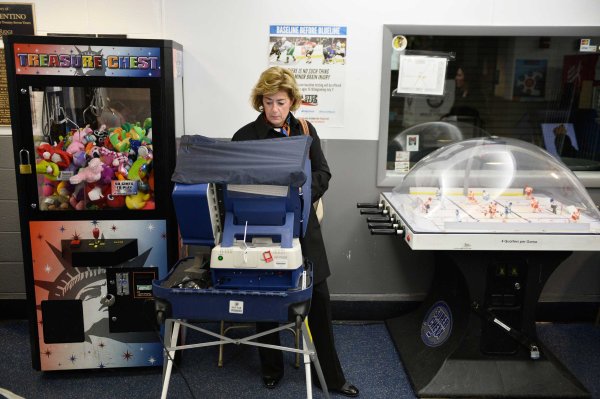 See Where America Votes
Next Up: Editor's Pick