Lena Dunham’s lawyers have threatened a lawsuit against a conservative organization after it published an article claiming that a passage from the Girls writer’s new memoir indicates she had sexually abused her younger sister.

In a letter dated Nov. 1, Dunham’s legal counsel explains to the right-leaning media outlet Truth Revolt that its story, titled “Lena Dunham Describes Sexually Abusing Her Little Sister,” was “highly defamatory,” according to the document obtained by The Hollywood Reporter. Her lawyers also demanded “a prominent public apology” and an immediate and permanent removal of all forms of the article, the letter said.

The writer-actress went on a self-described Twitter “rage spiral” over the weekend in response to the Truth Revolt’s allegations that parts of her new book, Not That Kind of Girl, describe her “experimenting sexually with her younger sister Grace, whom she says she attempted to persuade to kiss her using ‘anything a sexual predator might do.'”

Dunham further addressed the situation Tuesday in an exclusive statement to TIME, in which she said she does not condone abuse. She also acknowledged that her word choice was inappropriate: 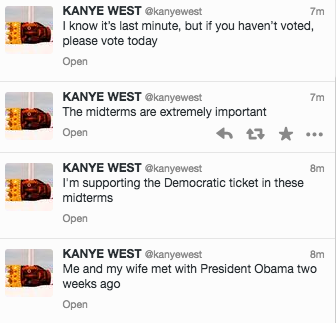 Kanye Says Don't Be a Monster, Go Vote
Next Up: Editor's Pick