Can Kim Kardashian Affect the Elections?

Democrats have a lot going against them this election. Recent polls have Democrats trailing in key Senate races, their key constituents are among those least likely to vote in the election and even admitting to voting for President Obama—let alone voting with him—has meant trouble on the campaign trail.

But on Election Day, they’ve got one leg up on Republicans: celebrity tweets.

Hollywood is overrun with liberal actors—though there are some outliers—and throngs of them are tweeting get-out-the-vote messages on Tuesday. Heck, Kim Kardashian West went so far as to share a picture of a cartoon version of herself “standing with” a cartoon Obama. (Sidenote: do you get K stars on Kim Kardashian: Hollywood when you vote? Asking for a friend.)

Getting celebrities to engage with voters—particularly young, low-propensity voters— has long-been the M.O. of organizations like HeadCount and Rock the Vote. “I’ve met a lot of people who don’t like politics,” Jane Henderson, the organization’s director of artistic engagement told TIME over the summer. “I’ve never met anyone who doesn’t like music.” And though their approach is nonpartisan, many of the tweets, Facebook posts, and Instagram pics shared by celebrities caters to a more liberal fan base.

Facebook analyzed the likes of Facebook users who supported specific candidates this election season and found where the cultural interests Republican and Democrats align and separate. According to the data, when comedian Stephen Colbert shares a get-out-the-vote message with his 3.5 million Facebook fans, the likelihood of a liberal engaging civically as a result are much higher than, say, if Dr. Ben Carson tells his 242,000 Twitter followers to hit the polls.

And Colbert is one of over 300 musicians, comedians and actors sharing GOTV messages via social media for the nonpartisan political engagement organization HeadCount—many of whom also cater to audiences that are more liberal. There’s at least one whose influence is spread across the political spectrum, Criminal Minds star Joe Mantegna who shared his HeadCount commissioned GOTV photo with his 424,000 Twitter followers.

Though whether or not a message from John Legend or Usher or Kim Kardashian: Hollywood’s Obama actually pushes a voter to the ballot box is murky, if even a small percentage of their combined 40 million followers took heed and hit the polls, it could have an effect. 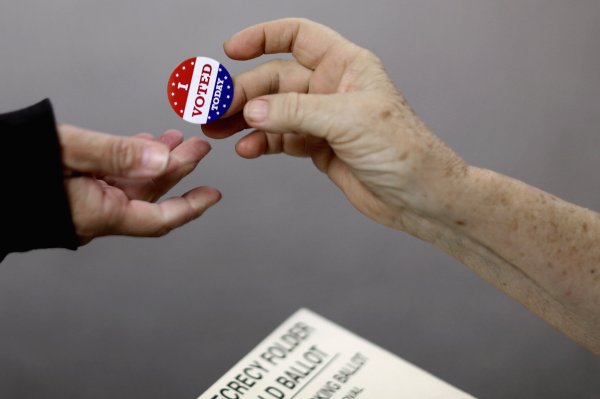 How to Watch the 2014 Elections, Hour by Hour
Next Up: Editor's Pick