What Richard Branson Can Learn From the Virgin Galactic Tragedy

Broken dream: Debris from Virgin Galactic SpaceShipTwo sits in a desert field on Nov. 2, 2014 north of Mojave, Calif.
Sandy Huffaker—Getty Images
Ideas
By Jeffrey Kluger
Jeffrey Kluger is Editor at Large for TIME magazine and the author of ten books, including Apollo 13, Apollo 8 and two novels for young adults. He has written more than 40 cover stories for TIME on topics ranging from space to human behavior to climate to medicine. Along with others at TIME, Kluger is an Emmy nominee for the web series A Year in Space.

Am I the first person to discover that the ecosystem of Twitter can be a little bit toxic? Those 140 characters, it seems, don’t always lend themselves to nuanced and reasoned discussion, and so the discussion that does take place is often—how best to put this?—discourteous.

All right, maybe that’s not news to anyone. But I’ve discovered that ugly truth anew in the past few days, in the wake of my Oct. 31 piece arguing that that day’s crash of Sir Richard Branson’s SpaceShipTwo—which took the life of test pilot Michael Alsbury, a 39-year-old married father of two—could be laid directly at the feet of Branson himself. I accused Branson of too much hucksterism and too much hubris. I meant what I said, and I stand by it.

Many of the tweets that opinion elicited are best left in the Twitter muck, particularly this thoughtful take, and this one and this one, which would be so much better if the author had taken the time to spell-check schmuck. There was, too, a response from Chris Sacca, a deservedly well-regarded investor in Uber, Kickstarter, Instagram and more and a man with an impressive 1.49 million Twitter followers: “Brave pioneer died conducting research. Go f*ck yourself, Time.” (Asterisk not provided in original.)

O.K., let’s all take a deep breath and try to collect ourselves. All disasters can be equal parts tragedy and travesty if we don’t keep our heads about us, but that doesn’t mean they have to remain that way. I’m happy to concede that my phrasing was provocative, and I indeed conceded it on CBS This Morning the day after the crash. But that doesn’t mean it was misplaced. Let’s start with that hubris thing.

As I mentioned in my earlier piece, I attended the Mojave Desert jamboree that Virgin Galactic threw last year for a few hundred of its paying passengers and got a look at SpaceShipTwo up close. What struck me the most was a bit of company artwork stenciled on the fuselage of the ship, as well as on all of the press materials distributed that day and even on the very lanyards that held the credentials of all of the attendees.

It was a series of silhouettes that represented a sort of walking tour of the key mile markers of human spaceflight. First was an Icarus-looking figure with large feathered wings; next came the Wright Brothers’ plane, then what appeared to be Lindbergh’s Spirit of St. Louis. Those were followed by an X-1 (the first plane to break the sound barrier), a 747, the Apollo lunar module, and then SpaceShipOne (the forerunner of SpaceShipTwo, and the first private craft to achieve suborbital flight). Finally came SpaceShipTwo itself, mated to its larger carrier craft.

So of the eight greatest pivot points in the long history of human aviation, Branson claims a connection to two—one of which (SpaceShipTwo) has never even done the thing that it was built to do, which is to get to space. Yes, logos are just semiotics—but semiotics count, especially when they seem to define the company’s culture.

As recently as Sept. 27, according to Mail Online, Branson was predicting that success for SpaceShipTwo was just months away, despite the fact that the company has been in operation since 2004 and has continually missed such self-imposed deadlines; had just switched from a rubber-based to a plastic-based fuel that had not even been tested in flight until last week; and still holds only an experimental—not operational—permit from the FAA. But never mind.

“I would very much hope that before Christmas, Virgin Galactic has visited space,” Branson told Mail Online. “And then we’ll move the whole program to New Mexico where myself and my son will be the first people to go up from the Spaceport in the spring of next year.”

These are less the words of a pioneer than those of an entrepreneur who has to keep the enthusiasm around his enterprise high, partly because he’s answerable to a lot of other people with a lot of money on the line: There is, for example, the $218.5 million the taxpayers of New Mexico have ponied up to build that spaceport near the appropriately named town of Truth or Consequences. There’s the estimated $300 million that’s been poured into Virgin Galactic by the Abu Dhabi–based firm Aabar Investments. And most troubling of all, there are the $20,000 deposits Virgin’s estimated 800 customers have put down to hold their reservations for their eventual flight.

This is where Branson dramatically parts company with all of the legends his acolytes in the Twitterverse and elsewhere like to invoke—especially the Wright brothers. Orville and Wilbur, it’s worth remembering, risked only their own hides on their first flights—and they never, ever presumed to take their highly experimental plane commercial no matter how confident they were in its reliability.

What’s more, they were genuinely attempting to accomplish something that had never been done before—powered flight—as opposed to simply coming up with a new way to fly a manned suborbital mission that was first checked off humanity’s bucket list on May 5, 1961, when Alan Shepard pulled it off. And if you’re going to make the argument that Branson is trying to democratize (the go-to word) spaceflight, making it available to everyone as opposed to just the elite, I would argue that you have to be pretty darned elite to be able to plunk down $250,000 for a 15-minute vacation—which factors out to a cool $16,666 per minute.

Second to the Wrights when it comes to easy and inapt comparisons are the heroes of NASA’s early days, who—argue the enthusiasts—lost plenty of pilots themselves and never would have gotten anywhere if they hadn’t taken bold risks. “You’ve read The Right Stuff, right?”@Kazanjy challenged me in a tweet. Yes, @Kazanjy, I have. And more relevant to our conversation, I wrote Apollo 13. I’ve also reported and written extensively about multiple space disasters over the years, including the loss of the shuttles Challenger and Columbia and the Mir space station accident in 1997.

The Challenger explosion in particular, as history has shown, was the direct result of the same get-it-done, fly-it-now, meet-the-deadline urgency the Virgin Galactic brass are applying to the SpaceShipTwo engineers. This doesn’t mean Branson has been cavalier with the lives of his pilots any more than NASA was, or that he isn’t genuinely heartbroken at the loss of one of them. It does mean that both he and the space agency of the Challenger era were pushing their staffs to keep unrealistic promises they themselves had made: a workable vehicle that could go commercial as soon as spring, in Branson’s case; and a shuttle that could fly payloads cheaply with a quick turnaround time, in NASA’s case. Something similar was true of the Apollo 1 launchpad fire that cost the lives of three astronauts in 1967, as NASA raced to meet the deadline President Kennedy set of having Americans on the moon by 1970.

What Apollo 13 showed was that even when the pressure is off—when the moon race is won and the hardware has been proven and you can finally begin flying missions that are less about just getting home in one piece and more about doing some actual science—you still can’t take anything for granted.

The reason the Apollo 13 astronauts, who had exhaustively prepared for every conceivable thing that could go wrong with their spacecraft, never rehearsed for the one that did, was that no one ever conceived of a quadruple failure of multiply redundant hardware. And if anyone did conceive of it, there was no point in preparing for it, because it would be like preparing for what to do if you drive your car over a cliff. You do nothing; you just die.

The Apollo 13 crew survived, but in the case of Virgin Galactic, a man has indeed been lost. It’s a hard and tragic truth that that death, unlike the Apollo 13 breakdown, was foreseeable. So too is the risk of a ship full of paying tourists suffering the same fate if Branson’s enterprise ever gets off the ground. It shouldn’t. 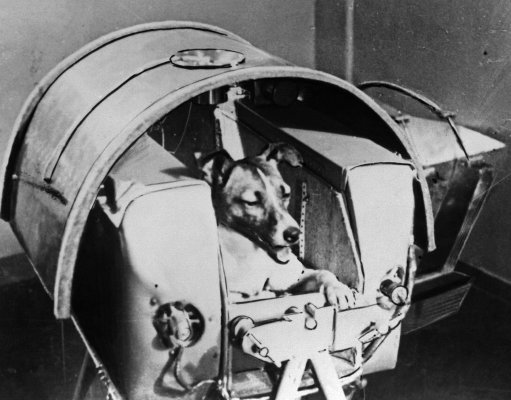 The Sad Story of Laika, the First Dog Launched Into Orbit
Next Up: Editor's Pick