Brittany Maynard, who moved to Oregon when diagnosed with terminal brain cancer so she could take advantage of the state’s physician-assisted suicide law, and whose eloquence in describing her decision to do so made her the new face of the right-to-die movement, died Saturday. She was 29 years old, and her death was confirmed by People on Sunday night.

Maynard said goodbye in a message to her friends and family on Facebook.

MORE: How Brittany Maynard could revive the “Death With Dignity” movement

“Goodbye to all my dear friends and family that I love,” she wrote. “Today is the day I have chosen to pass away with dignity in the face of my terminal illness, this terrible brain cancer that has taken so much from me … but would have taken so much more.

“The world is a beautiful place, travel has been my greatest teacher, my close friends and folks are the greatest givers,” she added. “I even have a ring of support around my bed as I type. … Goodbye world. Spread good energy. Pay it forward!”

MORE: Why a young woman with brain cancer moved to Oregon to die

Doctors gave Maynard six months to live earlier this year after diagnosing her with a form of brain cancer. She publicly announced her intention to move to Oregon so she could undergo physician-assisted suicide under the state’s Death With Dignity Act. Right-to-die advocates credited her with bringing new energy to a stalled movement.

“For people to argue against this choice for sick people really seems evil to me,” she told People last month. “They try to mix it up with suicide and that’s really unfair, because there’s not a single part of me that wants to die. But I am dying.”

Read next: How to talk about the end of your life

Read next: Brittany Maynard Could Revive the Stalled ‘Death With Dignity’ Movement 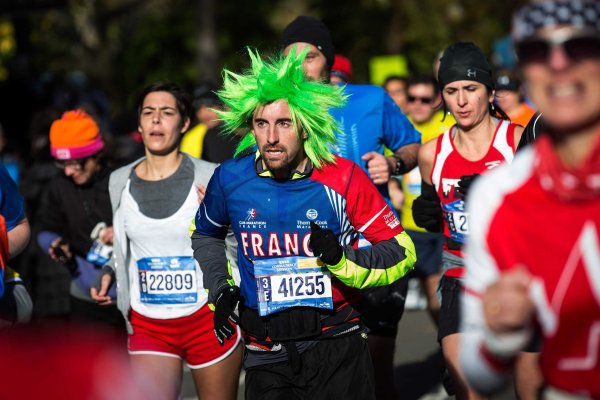 Watch the Entire New York City Marathon in Under 3 Minutes
Next Up: Editor's Pick