The Kentucky Democrat who is giving Senate Minority Leader Mitch McConnell the toughest reelection race of his career teared up during a speech Sunday just two days before the election.

“You are the messengers that Mitch McConnell can’t buy. He can buy the airwaves,” Grimes said, choking up, her eyes welling with tears, “but not the hearts and minds of each and every one of you… You know that after 30 years of Mitch McConnell we can do better. And I tell you, this strong independent Kentucky woman, I’ve got kick still in me.”

Grimes, 35, who is Kentucky’s secretary of state, was talking about McConnell loaning his campaign $1.8 million on Oct. 24, on top of the whopping $53 million he’s already raised to beat Grimes. In the emotional speech before a largely union crowd, Grimes blasted McConnell, 72, for being in the pocket of “millionaires and billionaires,” and said she would “work for the people of Kentucky” if elected.

Grimes had campaigned Saturday with Hillary Clinton, who she said is one of her lifelong political idols. Clinton famously won the New Hampshire presidential primary in 2008 after welling up emotionally at a campaign event. For Clinton at the time it was a pivotal, if inadvertant, event. Prior to New Hampshire, she’d run on an almost wooden campaign of toughness, trying to show she could be commander-in-chief, almost burying the historic nature of her campaign. But rather than painting her as weak, Clinton’s tears had a humanizing effect. After her New Hampshire victory, largely on the back of female voters, she sought to appeal to women more, but the push came too little too late to save her candidacy (a mistake many say she’ll rectify in 2016).

Grimes, by contrast, has spent her entire campaign focused on turning out women, emphasizing equal pay, childcare and McConnell’s votes against the Violence Against Women’s Act. And running for Senate isn’t the same as running for an executive office, where voters question a candidate’s ability to be a commander-in-chief. But Grimes’ frustration on Sunday was genuine and similar to Clinton’s in its sense of almost hopeless exasperation: the raw honesty looking a potential hard-taught close loss in its face.

Grimes was down in an NBC/Marist poll out Sunday, 41% to McConnell’s 50%, though her campaign says its internal polls show a race still evenly split. “We remain confident in the accuracy of our own polling, which for months has shown this race a dead heat,” says Charly Norton, Grimes’ spokeswoman. Mitch McConnell’s panicked $2-million check to himself and his sleazy, illegal voter suppression tactics suggest he sees the same.”

On Sunday, Grimes also grew visibly angry waving a mailer sent out by the Kentucky Republican Party that she said amounted to voter suppression. Grimes’ campaign is suing the party over the mailer, which warns Democrats that if they vote on Tuesday they could be committing an “election violation.”

“He thinks that another six years on top of the 30 he’s already had constitutes change, well we don’t buy that,” Grimes said. “He thinks that we can’t live without his seniority, well has he seen that we’re at the bottom of every national indicator that’s out there? Henderson, are ya’ll better off after having Mitch McConnell for the last 30 years?”

McConnell is poised to be Senate Majority Leader if Republicans recapture the upper chamber. 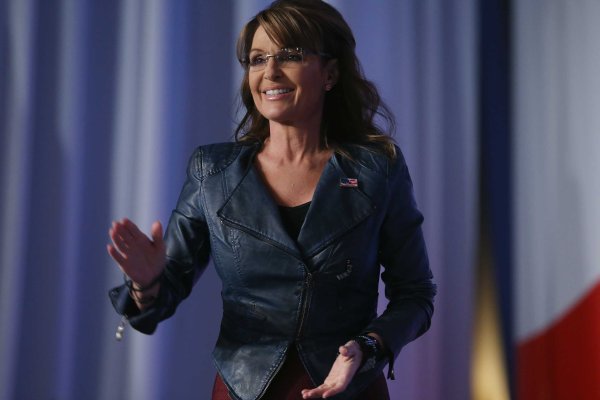