The daredevil Nik Wallenda successfully walked between skyscrapers on high wires suspended hundreds of feet above downtown Chicago on Sunday night, accomplishing the historic feat without a harness or a safety net—and in one case blindfolded.

In the two-plus hour long event that aired live on the Discovery Channel, Wallenda pulled off something incredible and set two world records in the process—walking on a high wire strung between three Chicago skyscrapers, all of which are taller than the Washington Monument. As if that wasn’t enough of a challenge, the daredevil aerialist did one of the walks on a significant incline and another blindfolded. The Discovery Channel aired the stunt with a 10-second delay so it could cut away if Wallenda fell to his death. But that precaution proved unnecessary.

“The big thing is the intimidation factor,” Wallenda said, adding that it’s hard “to look down from 600 feet in the air.”

For the first half of his two-part spectacle, Wallenda walked uphill on a wire suspended at what was supposed to be a record-breaking 15-degree incline, from Chicago’s 588-foot Marina Tower West to the top of the 671-foot Leo Burnett building on the other side of the Chicago river. During the show it was announced that the incline of the wire ended up being even steeper than anticipated, coming in at 19 degrees. That’s like walking up eight stories while suspended in the air 50 stories up, with winds gusting across the wire.

Wallenda made it look easy. With his family watching and a crowd of fans cheering him from the ground below, Wallenda calmly grabbed his pole and headed out for an uphill walk. The performance went off without a hitch, but the wire was bouncing enough under his weight that he opted not to take a planned selfie halfway across the wire. He managed the first half in just six minutes and 50 seconds, running the last few steps to drop his pole and hug his children and wife.

The second half of the event saw Wallenda walk blindfolded between the two Marina City towers, which music fans would recognize from the cover of Wilco’s Yankee Hotel Foxtrot.

Before the show, Wallenda had said that Chicago’s weather would most likely be his worst enemy—it is, after all, the Windy City.

“Whether those winds are too strong or whether the cable wants to freeze or there is a snowstorm, we just don’t know,” he said. The Discovery Channel had a weatherman on hand to keep an eye on the weather that had brought 20-foot waves to Chicago’s Lake Michigan over the weekend. The wind had died down some, but was still gusting through the city’s Skyscraper Canyon. As Wallenda prepared to walk blindfolded between the Marina Towers, he was worried about the crosswinds that could knock him sideways.

“It’s mentally draining,” said Wallenda of walking a tightrope without being able to rely on his vision.

In order to concentrate, Wallenda took out the earpiece through which he had been communicating with his father during the first walk, requiring his father to shout instructions through a megaphone. Before stepping on to the wire, Wallenda begged the crowd to be quiet so he could hear his father’s instructions. Wallenda finished the walk in just one minute and 16 seconds.

The 35-year-old tightrope walker is the great-grandson of Karl Wallenda of the famous Flying Wallendas circus family, and he has been on a high wire since before he was born—his mother, Delilah Wallenda, walked the tightrope while she was six months pregnant with him.

His years of experience don’t make his stunts any less harrowing to watch, though. After all, at the age of 73, his great-grandfather was killed attempting to walk between two buildings in Puerto Rico in 1978. The show aired some of that heart-stopping footage and while it may serve as a cautionary tale for most of the world, Wallenda saw it as a challenge. He completed his great-grandfather’s endeavor in 2011.

Despite the risks, Wallenda continues his thrilling stunts. In 2012, he made a record-breaking walk over Niagara Falls from the U.S. into Canada. and in 2013 he took a quarter-mile stroll on a wire suspended over the Little Colorado River Gorge. Each of those stunts drew close to 13 million viewers. 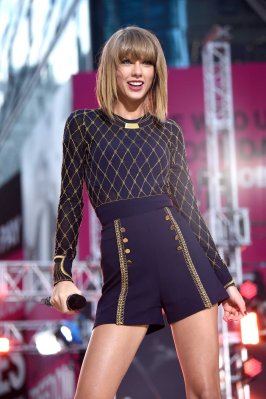 Taylor Swift's 1989 on Track to Break Sales Records
Next Up: Editor's Pick