5 Election Comedies to Get You Ready for the Polls

If Election Day were a comedy, this is how it would play out: One candidate would be unequivocally good, the other ruthlessly evil. Political operatives would control the play-by-play from a corner office far from the action. An unexpected candidate would emerge from nowhere in the eleventh hour, throwing the race into a tizzy. The deserving candidate would lose by a tight margin, but when the evil candidate’s fraud is revealed, the rightful victor would take the throne. Bad guys out, good guys in.

But Election Day is not a comedy, and good and evil aren’t two poles separated by an impossible distance. Good isn’t always as good as it purports to be. Good, alas, often loses. It’s refreshing, though, to visit a world as simple as the one these movies imagine. Perhaps you’re a jaded would-be voter in need of convincing that some good might come from pulling that ancient lever, or maybe you long to escape the disappointment of your candidate’s certain defeat, and find yourself instead enveloped in the warmth of Chris Farley’s glow.

Either way, here are five election comedies to motivate you, console you, and get you ready for the polls on Election Day.

Black Sheep belongs to a class of movies that strikes you as pure comedic genius when you’re 12 and senseless drivel once your tastes have matured. But if you can tap into whatever lingering appreciation you have for scatological humor, it’s worth watching if only to spend 87 minutes with Chris Farley. Largely a vehicle for Farley’s brutishly brilliant physical comedy, Black Sheep has many of the elements of a typical election flick. Revolving around Farley’s Mike Donnelly, hapless kid brother to Washington gubernatorial candidate Al Donnelly, the movie pits familial love against political ambitions. Mike’s efforts to help the campaign unfailingly result in public embarrassment, threatening Al’s chances of success.

Like many in the genre, the movie focuses more on the campaign than the election itself. Donnelly is pure goodness, his dedication to his brother matched only by his concern for his would-be constituents. Incumbent Governor Evelyn Tracy is pure evil, sporting a win-at-all-costs mentality that counts fraud and slander among its tactics. It’s an absurd comedy of errors in which the younger Donnelly can’t seem to catch a break, but nestled between the pratfalls and the gags is one ingredient that often runs in short supply at the polls: just a little bit of heart.

The media is as crucial to the outcome of an election as its candidates’ campaigns, and Wag the Dog shows just how powerful the news can be — even when it’s fake. Like many good election movies, and a fair share of actual elections, this one revolves around a sex scandal. The sitting president is accused, less than two weeks before the election, of sexually assaulting a young girl. To distract from the scandal and inspire patriotism among voters, the White House hires spin-doctor Conrad Brean (Robert de Niro), who enlists Hollywood producer Stanley Motss (Dustin Hoffman) to stage a fake war with Albania.

Wag the Dog is intelligent satire in contrast to Black Sheep’s inane Looney Toon-esque shenanigans. Released one month before the Monica Lewinsky scandal, the movie had Roger Ebert perceptively noting, “It is getting harder and harder for satire to stay ahead of reality.” Rather than dishing up an inspiring good-guys-win narrative, it reminds the audience — American voters — how gullible we can be in the face of an effective media campaign. “Why does a dog wag its tail?” the opening credits ask. “Because a dog is smarter than its tail. If the tail were smarter, the tail would wag the dog.” In Wag the Dog, we are the brainless tail, ever at the whim of the scheming dog.

“Winning isn’t everything,” says Tracy Flick. “Win or lose, ethical conduct is the most important thing.” Reese Witherspoon’s Flick is desperate for political glory in this portrayal of a viciously contested race for student council president. For a story about student government, it has all the trappings of a full-grown adult election: sex scandals and personal vendettas, witch hunts and sabotage. Blaming Tracy for her part in an affair that got his best friend fired, popular teacher Jim McAllister (Matthew Broderick) will do anything to take her down. His meddling leads to a contest that stands in stark contrast to the ideals he espouses in his social studies class.

Rotating between narrators, director Alexander Payne explores Tracy’s statement: Is ethical conduct more important than victory? And does it guarantee victory, or all but rule it out? Witherspoon delivers one of her most memorable roles as the type-A Flick, who sees victory as her destiny, and destiny as inescapable.

Napoleon Dynamite may be a geek movie before it is an election movie, but the election between Pedro Sánchez (Efren Ramirez) and Summer Wheatley (Haylie Duff) plays a central role in the nerdy protagonists’ victory over their high school’s popular posse. Pedro is a transfer student whom Napoleon befriends and supports in his campaign for school president. He has the charisma of a sloth in a coma, always donning a blank stare above his bolo tie. His opponent, Summer, is equally uninspiring, banking on her social status to deliver her to victory.

Pedro’s election speech leaves much to be desired. When he promises the students, “If you vote for me, all of your wildest dreams will come true,” his tone is like that of a doctor delivering bad news. But a vote for Pedro is less a vote for change than it is a symbol of the underdog getting his due, a nerd with no ideas defeating a cheerleader with no ideas. Many a voter will sigh, waiting in line to cast her ballot, that she’s choosing the lesser of two evils, the better option between two mediocre choices. Napoleon Dynamite asks us to make this choice — and to compensate for its candidates’ lack of imagination, it gave us the dance scene of the decade.

The Campaign opens with a quote from Ross Perot, a presidential candidate perhaps best remembered for the size of his ears. “War has rules. Mud wrestling has rules. Politics has no rules.” And so the tone is set for opponents Cam Brady (Will Ferrell) and Marty Huggins (Zach Galifianakis), an incumbent and an underdog vying for one seat in Congress. The Campaign offers a parody of modern elections that rings true for all its hyperbole. Gains in the polls are driven by strong hair and the frequency with which a candidate invokes America, Jesus and Freedom. Pandering is the rule, as Brady tells every group he meets — troops, farmers, audio installation specialists, and Filipino tilt-a-whirl operators — that they are the backbone of America.

In its best moments — when it’s not resorting to fat jokes and bathroom humor — The Campaign is funny because it’s so familiar. Big money decides who runs and what they stand for. Campaign managers shape candidates’ images, from their wives’ hairstyles to the eagle-inspired artwork adorning their living rooms. And a significant focus on attack ads, amplifying a particle of dirt into a full-blown dust storm, distracts from the time candidates spend discussing what they actually stand for. It would be farfetched to call The Campaign a cinematic feat. But it does make us consider the just-discernable line between reality and farce. 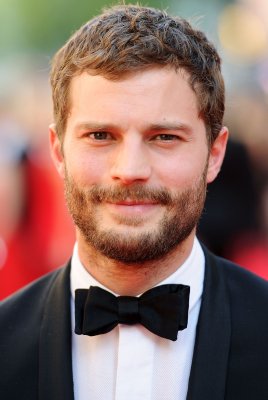 Jamie Dornan Won't Be Completely Naked in 50 Shades
Next Up: Editor's Pick