Protestors march outside TCF Bank Stadium before an NFL football game between the Minnesota Vikings and the Washington Redskins on Nov. 2, 2014, in Minneapolis.
Ann Heisenfelt—AP
By Nolan Feeney

Thousands of demonstrators gathered Sunday in Minneapolis to protest the Washington Redskins name ahead of the football team’s game against the Minnesota Vikings, police said.

The team’s owner, Daniel Snyder, has steadfastly said he won’t change the team name despite criticism from figures including President Barack Obama, half of the U.S. Senate and Native-American activists.

Clyde Bellecourt, a civil rights activist and co-founder of the American Indian Movement, said at Sunday’s event that the team name is a reminder of the scalping and genocide Native American people endured throughout history, The Minneapolis Star-Tribune reports.

Minneapolis Mayor Betsy Hodges participated in chants of “Change the name!” before speaking to the crowd. “I have a message to the Washington team,” she said. “The clock is ticking on your name … it’s more than an insult, it’s hate.”

Police estimate that 3,200 people attended, while organizers say the turnout was closer to 5,000 people, making the event the area’s fourth-largest protest related to Native-American imagery in professional sports since the World Series in 1991, when the Atlanta Braves played the Minnesota Twins. Attendees reportedly traveled from states including Kentucky, Montana, Oklahoma, North Dakota and Indiana.

The Washington team’s visit to Minneapolis has not been without incident. Two buses carrying players and coaches got into an accident earlier Sunday morning; no serious injuries were reported. 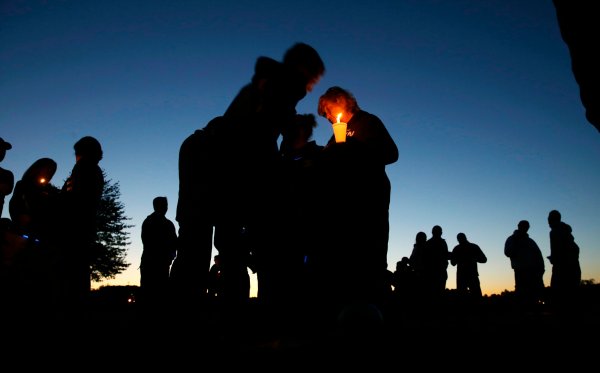