A nurse who was forcibly isolated after returning from treating Ebola patients in Sierra Leone, despite not showing any symptoms, said Sunday that a state-mandated quarantine ordered by Gov. Chris Christie of New Jersey was the result of “an abundance of politics.”

Kaci Hickox was held against her will near Newark Liberty International Airport after Christie ordered 21-day mandatory quarantines for all returning health workers, NBC News reports. Hickox was allowed to leave the quarantine last Monday following protests from her lawyer, the Obama administration and officials from the Centers for Disease Control and Prevention (CDC).

“When Gov. Christie stated that it was an abundance of caution, which is his reasoning for putting health care workers in a sort of quarantine for three weeks, it was really an abundance of politics,” Hickox told Chuck Todd on NBC’s Meet the Press. “And I think all of the scientific and medical and public health community agrees with me on that statement.”

Since returning from New Jersey, Hickox has been in a legal battle with authorities in her home state of Maine. A judge ruled late Thursday she must avoid public places and stay at least 3ft from other people, hours after she went on a bike ride in defiance of a state-recommended self-quarantine.

But another Maine judge sided with her Friday, ruling that she could travel freely as long as she alerts health officials about her location and monitors her health.

“We have been researching this disease for 38 years, since its first appearance in Africa,” Hickox said. “And we know how the infection is transmitted from person to person. And we know that it’s not transmitted from someone who is asymptomatic, as I am and many other aid workers will be when they return.”

Christie’s quarantine order remains in place in New Jersey, though returning health-care workers who have been in contact with Ebola patients will be able to carry out their quarantines in their homes. 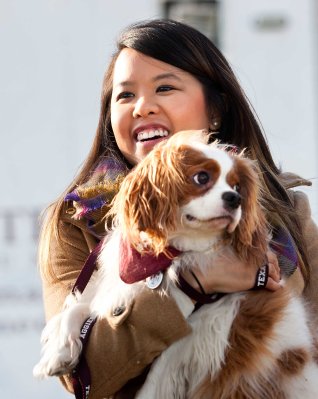 Ebola Nurse Gets Dog Back
Next Up: Editor's Pick