A Virgin Galactic spacecraft crashed in the California desert during a test flight Friday, the company said. The crash killed one test pilot and left another seriously injured.

Visibly shaken officials at a Friday press conference said that the surviving pilot is being treated at Antelope Valley Hospital and that little is known at this time about what caused the crash.

A witness told the Associated Press that SpaceShipTwo, which is carried aloft by a separate aircraft called WhiteKnightTwo, exploded shortly after detaching from its carrier craft and igniting its rockets. Virgin Galactic has been testing the aircraft, known as SpaceShipTwo, in the Southern California desert in hopes that it could one day be used to shuttle tourists to space.

Virgin Galactic recently changed SpaceShipTwo’s fuel mixture from a rubber-based solution to a plastic mix, but it’s unclear if that switch had anything to do with Friday’s explosion.

“We will work closely with relevant authorities to determine the cause of this accident and provide updates ASAP,” the company said in a tweet.

Officials from the Kern County Fire Department and the California Highway Patrol both responded to the incident, while local news helicopter footage of the scene showed debris clearly from SpaceShipTwo littering the test area. The National Transportation Safety Board said Friday it’s sending a “go-team” to investigate the incident.

“It hasn’t been an easy week,” said Stuart Witt, CEO of the Mojave Air & Space Port, at a press conference Friday. “It’s certainly been a challenge, but, where I’m from, this is where you find out your true character.” 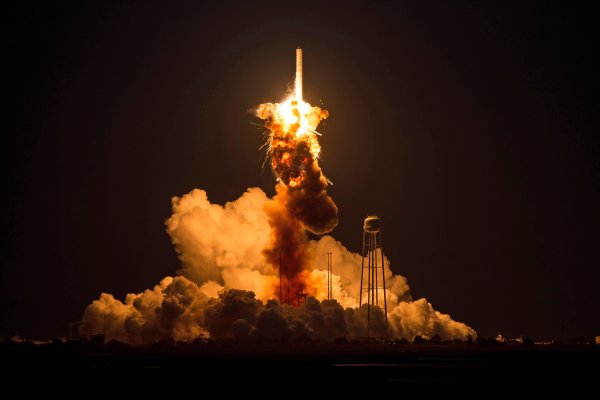 Watch This Pilot's Dramatic Midair Video of the Antares Rocket Explosion
Next Up: Editor's Pick