Kansas and South Dakota aren’t the only states with late breaking October surprises involving surging Independent candidates. In Alaska, Republican Gov. Sean Parnell is fending off a challenge from Independent Bill Walker, who this week got the surprise endorsement of Sarah Palin.

Palin’s backing comes after Parnell undid her signature legislative achievement, a hike in oil and gas taxes. Palin and other supporters of the measure tried to reinstate the taxes in a ballot initiative, but that failed after a close vote in the primaries. Parnell campaigned against it.

Parnell has come under fire for the resulting budget shortfalls without the taxes. He’s also been criticized for his handling of accusations of sexual assault and misconduct in the Alaska National Guard. In a debate last week, Walker said Parnell “acted immediately” when oil companies complained of being taxed too much, but that it took four years after chaplains raised concerns about misconduct for him to fire the head of the state’s National Guard.

“The bottom line is, I acted immediately, and I want you to quit saying that I didn’t,” Parnell replied.

“Governor, you must understand, you’re not the victim here,” Walker quipped.

Walker, 63, is a former mayor of Valdez and until the primary he was a registered Republican. Byron Mallot, who won the Democratic primary, agreed to drop out and run as Walker’s lieutenant governor if Walker agreed to abandon his party label. Both sides recognized that in a three-way race, Parnell would win. But Mallot and Democrats were so committed to defeating Parnell, they made the deal with Walker.

Palin’s endorsement came as a surprise. “There have been lots of surprises in this whole process,” Walker told The Independent. “But that was a good surprise.”

Still, it might not help that much. “Palin endorsing Walker might not be the worst thing for Parnell,” says Jennifer Duffy, who follows gubernatorial races for the non-partisan Cook Political Report. A recent Public Policy Poll found that more than half of Alaskans have an unfavorable view of Palin and some 30% blamed the former governor for allegedly starting a brawl at a birthday party in Anchorage in September.

That said, the one place Palin does still hold sway is with the hard right voters—essentially Parnell’s base.

Walker leads Parnell by 1.8 percentage points, according to an average of Alaska polls compiled by Real Clear Politics. But Alaska is notoriously difficult to poll and the Senate slug out between Democratic incumbent Mark Begich and former Alaska attorney general under Palin, Dan Sullivan, has sucked all the oxygen out of the gubernatorial race. “It’s been a hard race to follow,” Duffy says. “The Senate race ate up nearly all the TV time so I don’t know how much of the candidates’ message is getting out.”

National Democrats have largely stayed out of the race, but they have been delighted to see it drawing away national money. In the final weeks of the campaign, the Republican Governor’s Association has put $1.3 million into a new independent expenditure group formed to support Parnell. 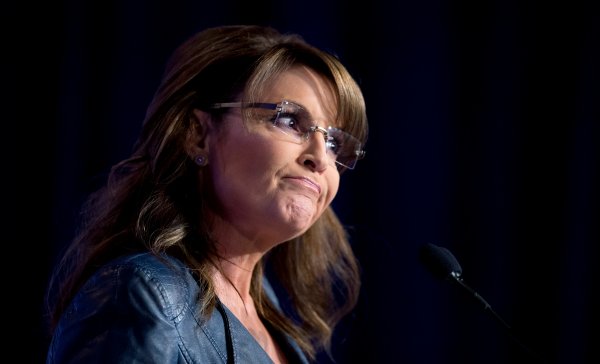