Indonesia's new President Joko Widodo shouts "Merdeka," meaning freedom, at the end of his speech, during his inauguration at the parliament's building in Jakarta on Oct. 20, 2014
Darren Whiteside—Reuters
By Ian Lloyd Neubauer / Sydney

“We will give a warning that this is not acceptable,” Jokowi, as he is widely known, told Fairfax Media in reference to half a dozen incursions into Indonesian waters last year by Australian navy ships turning back boats full of predominantly Middle Eastern asylum seekers. “We have international law, you must respect international law.”

“To uphold our political sovereignty, what we must do is preserve the sovereignty of the Unitary State of the Republic of Indonesia,” Retno said at her first press conference. “We’ll do this firmly and clearly.”

The interception one day earlier of a Singaporean passenger aircraft over a well-traveled flight path that cuts through Indonesian airspace may be indicative of Jakarta’s new hard-line stance. Indonesian fighter jets forced the aircraft to land and pay a $4,900 fine — despite protestation from the Singaporean owner, ST Aerospace, that it had been using the route for a number of years without the need for prior clearance from Indonesia’s Directorate General of Civil Aviation.

However, these messages must be read within the context of Indonesia’s time-honored political melodrama, where tough talk against meddling foreign powers is par for the course. It’s also an easy and predictable way for new administration to score political points on the home front. “I think Jokowi’s warning to Australia was made for domestic consumption rather that advocating a nationalistic tone in foreign policy,” says Philips Vermonte, head of international relations at the Centre for Strategic and International Studies in Jakarta.

Indeed, Jokowi’s apparent double standards when dealing with Chinese incursions in the fish- and gas-rich waters of the Natuna Islands, on the northwest coast of Indonesian Borneo, seems to demonstrate diplomatic nuance rather than a new era of nationalistic fervor.

As recently as March 2013, armed Chinese ships bullied Indonesian patrol boats into releasing Chinese fisherman caught trawling illegally near Natuna. China has also included parts of the waters around Natuna within its so-called nine-dash line — its vague southern maritime boundary, adding Indonesia to the long list of countries it’s dueling with over aggressive claims to some 90% of the South China Sea.

In April, Indonesia’s armed-forces chief General Moeldoko penned an op-ed in the Wall Street Journal promising to strengthen Indonesian forces on Natuna and prepare fighter jets to meet “any eventuality.”

But two months later, during a presidential-election debate in June, Jokowi claimed Indonesia had no beef with China. In later interviews he adroitly turned the burning strategic problem with China on its head, suggesting Indonesia could serve as an “honest broker” vis-a-vis the Middle Kingdom’s disputes with other countries in the South China Sea.

This should not, however, be understood to mean the new Indonesian administration will be pushovers. Its soft stance on overlapping territorial claims with China is obviously linked to the fact that China is Indonesia’s second largest export trading partner. Australia, meanwhile, barely makes the top 10.

The lesson, it seems, more concerns shifting regional power than newfound Indonesian belligerence. “Australia needs to understand that Indonesia’s place in the world is growing, while it is not,”  adds Professor Tim Lindsey, director of the Centre for Indonesian Law, Islam and Society at the Melbourne Law School. By current estimates, he adds, Indonesia will have world’s seventh largest economy in around a decade and the fifth largest by 2050. “Australia’s current policies of turning back the boats doesn’t seem to factor in any of that at all,” says Lindsey.

“I think Australia would be advised to take [Jokowi’s latest about naval incursions] warning very seriously, and that it would be unwise to look at it in narrow terms by saying, ‘Their navy is very small so it’s not a valid threat,’” opines Antje Missbach, a research fellow at Monash University’s School of Social Sciences in Melbourne. “There are many ways Indonesia could make a point without involving its navy.”

Moreover, she adds, “Look what happened last time Australia offended them,” referring to when Indonesia recalled its ambassador to Australia for six months following revelations by NSA whistle-blower Edward Snowden that Australia had spied on Yudhoyono and his wife.

Speaking to TIME, Australian Immigration Minister Scott Morrison says, “It is not the government’s policy to incur Indonesia’s waters” and blames past incursions on the opposition government it replaced following the September 2013 general elections. “[We’re] working closely with the new government of Indonesia on people-smuggling issues and we are optimistic about initial responses,” Morrison says.

Optimism is one thing; keeping out of your neighbor’s backyard is another altogether. 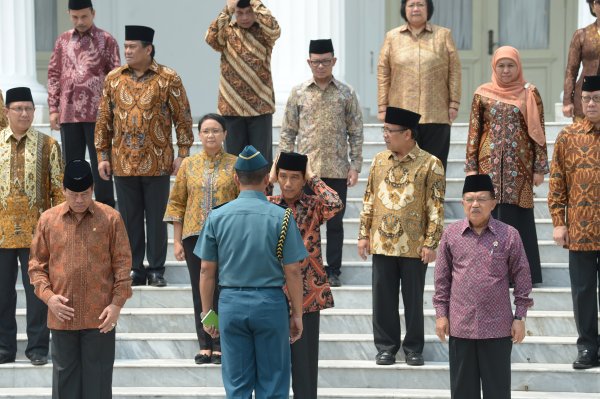 Jokowi's Cabinet of Compromise
Next Up: Editor's Pick