Charlie Sheen Wants to Return to Two and a Half Men

Charlie Sheen wants back on Two and a Half Men, after a dramatic exit from the show in 2011.

Rumors have been swirling as to whether Sheen might make an appearance on the series finale, and the actor said he’s up for the job. “I would definitely do it, yeah, yeah,” he told Extra. “If they’ll still have me, I will be there. Yeah, I owe it some measure of closure. I owe it to the fans… I just think it makes sense.”

The actor even has a final plot in mind. “I have a brilliant idea, but don’t want to give it away. It’s the type of moment I think people would talk about for a long time and it wouldn’t get in anybody’s way,” Sheen said. “Think it would be a nice tip of the hat… They know I want to do it and I know they’re open to it, so, guess we’re just a meeting away from making it happen.”

But Sheen’s dramatic return may be a pipe dream. Sheen was very publicly fired from the top-rated comedy three years ago, with TV executives citing self-destructive behavior and inflammatory comments to the producers at the time. In an 11-page document they said the actor was “endangering his life” with alcohol and drug abuse and was burning bridges with those on the set through bad behavior. Before getting the boot, Sheen was the highest-paid actor in U.S. television.

“It is a big day of gladness at the Sober Valley Lodge because now I can take all of the bazillions, never have to look at whatshiscock again, and I never have to put on those silly shirts for as long as this warlock exists in the terrestrial dimension,” Sheen said in a statement after leaving the show. His lawyers also threatened to sue Warner Bros. Television over the firing.

Sheen moved to FX where he continues to star in his own show Anger Management, and Ashton Kutcher took over as a lead on the show. But CBS and Sheen may bury the hatchet just for one final episode—at least, according to Charlie Sheen. 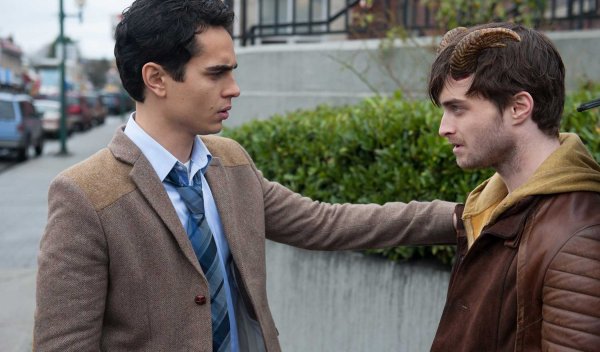