5 iPhone Apps Your Teen Doesn’t Want You to Download

In the ’80s, teens had only was one social app, and it was called the telephone. In the ‘90s, chat rooms were all the rage, leading to social sites like Facebook, Friendster and Myspace in the 2000s. But today’s kids, armed with smartphones, are all over the web, so good luck keeping up with them.

Of course no one wants to be a helicopter parent — but armed with these five apps, you can be a drone parent instead.

Ask and ye shall receive. This global website is a place were teens ask each other anonymous questions. The service connects to Facebook and Twitter accounts — as well as 133 million users in more than 150 countries — making it easier for users to find and follow their friends. But even if you’re not connected to your kid on a social site, you can still follow them anonymously by searching for his or her Facebook/Twitter username (or even just their actual name). So what are kids asking on this site? Some of the questions are your typical teenage fare, such as, “What scares you more than anything else?” But anonymous, user-created questions like “Are you a virgin?” and other saltier submissions can be rather eye-opening. Sadly, the site’s anonymous comments were linked to a teen suicide earlier this year.

Ask.fm is available for free in the App Store.

Want your kids to think you’re the coolest? Respond with a Grumpy Cat GIF when they write you saying they’re going to be out past curfew. Want to annoy your kids to no end? Respond to every text they send with a GIF, ignoring the context and not sending any verbal explanation. Nutmeg, a new app that brings these short, animated images to text messaging for the first time, is a collection of some of the funniest graphics on the web, sorted by emotion so you can convert exactly the right message without any words at all.

Nutmeg is available for free in the App Store.

It used to be that if you wanted to keep a secret, you wouldn’t tell it to anyone. Nowadays, people just post them online. This app allows people to post secrets online, where other people can comment on them. It connects to both Facebook and Twitter, so you can follow your friends, though the entire service is anonymous, meaning you don’t actually know which of your friends are on Secret (or who is making comments). While it can be a good place for people to get support for embarrassing personal issues, that’s entirely dependent on who your friends are once they don the mask of anonymity. And along those lines, the app has also been cited in cyberbullying cases, and anonymous suicide notes have appeared on the service. It’s because of apps like this that you might want to have a talk with your child about anonymous social media.

Secret is available for free in the App Store.

Kids may say the darnedest things, but on this anonymous social sharing app, they post them online, too. Similar to Secret, this app allows users to post short messages overlaid onto pictures, which other users can like, reply to with their own graphical posts, or even send chat messages to the poster. Since it doesn’t connect to Facebook or Twitter, Whisper is much better from an anonymity perspective than Secret. But since strangers can contact users about their posts, this service opens up a whole new area of concern. Still, Whisper does categorize posts by content, so it can be good for teens grappling with complex issues like their sexuality, since (ideally) they can get support from other LGBTQ-interested users. Then again, it can also open them up to cruel, anonymous responses. So, like anything on the web, it’s a mixed bag. (Also worth noting, The Guardian recently revealed that the app uses its geolocation features to track users’ physical locations, though the company has refuted some of the newspaper’s claims.)

Whisper is available for free in the App Store.

While this anonymous, location-based bulletin board sounds like a fictional web service on The Good Wife, let me assure you it is very real. Popular on college campuses and other areas dense in student population, Yik Yak is where teens go to post the wittier and more thoughtful commentary on their life. With the ability for users to up- or down-vote the “yaks” posted by their peers, Yik Yak almost seems higher brow than other anonymous online services. And upon browsing this app, don’t be surprised to find some funny, intriguing thoughts. For example, here’s the current most popular post: “Today, my math TA was waiting for someone to answer his question and after a few moments of silence he said ‘I do math for a living, I can out awkward anyone.’” Yes, but can you out-awkward a snoopy parent?

Yik Yak is available for free in the App Store. 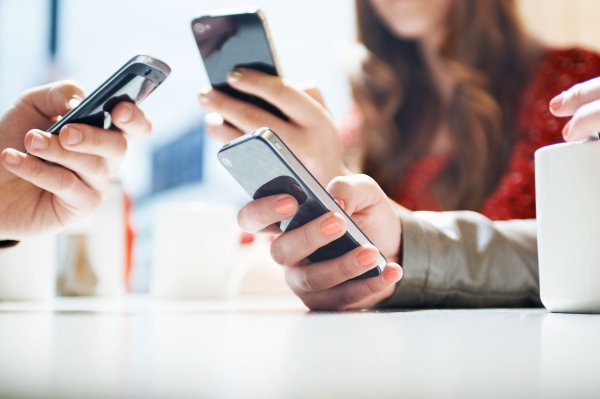 Download These 5 Smartphone Apps for a Safer Halloween
Next Up: Editor's Pick