In the beginning were the spirits. They were invisible beings, heard and seen only by the most powerful sorcerers or witches. Some were thought to be malevolent; some were praised as good. They could find lost objects, spy upon enemies, and now and then affect the weather.

Two great witches, Mekare and Maharet, lived in a beautiful valley on the side of Mount Carmel, and they communed with the spirits. One of these spirits, the great and powerful Amel, could, in his mischief making, take blood from human beings. Tiny bits of blood entered the alchemical mystery of the spirit, though how no one knew. But Amel loved the witch Mekare and was ever eager to serve her. She saw him as no other witch ever had, and he loved her for it.

One day the troops of an enemy came—soldiers of the powerful Queen Akasha of Egypt. She wanted the witches; she wanted their knowledge, their secrets. This wicked monarch destroyed the valley and the villages of Mekare and Maharet and brought the sisters by force to her own kingdom.

Amel, the furious familiar spirit of the witch Mekare, sought to punish the Queen. When she lay dying, stabbed over and over by conspirators of her own court, this spirit Amel entered into her, fusing with her body and her blood and giving her a new and terrifying vitality. This fusion caused a new entity to be born into the world: the vampire, the blood drinker. Akasha became the first vampire, and her King, Enkil, the second. All vampires were descended from them.

At the dawn of the Common Era, an elder, a keeper of the Divine Parents, abandoned Akasha and Enkil in the desert for the sun to destroy them. All over the world young blood drinkers perished, burnt to death in their coffins, their shrines, or in their tracks as the sun shone on the Mother and Father. But the Mother and Father themselves were too strong to perish. And many of the very old ones survived as well, though badly burned and in pain.

A newly made blood drinker, a wise Roman scholar by the name of Marius, went down to Egypt to find the King and Queen and protect them so that no holocaust would ever again ravage the world of the Undead. And thereafter Marius made them his sacred responsibility. The legend of Marius and Those Who Must Be Kept endured for almost two millennia.

Lestat’s voice waked the Queen from millennia of silence and slumber. She rose with a dream: that she would dominate the world of human beings through cruelty and slaughter and become for them the Queen of Heaven…

Lestat once again wrote the story. He had been there. He had seen the struggle for power with his own eyes. He gave his testimony to everyone. The mortal world took no notice of his “fictions,” but his tales shocked the Undead. It became the legacy of all blood drinkers the world over to know they shared a common bond, a common history, a common root.

This is the tale of how that knowledge changed the tribe and its destiny forever.

Excerpted from PRINCE LESTAT by Anne Rice. Copyright © 2014 by Anne Rice. Excerpted by permission of Knopf, a division of Random House LLC. All rights reserved. No part of this excerpt may be reproduced or reprinted without permission in writing from the publisher. 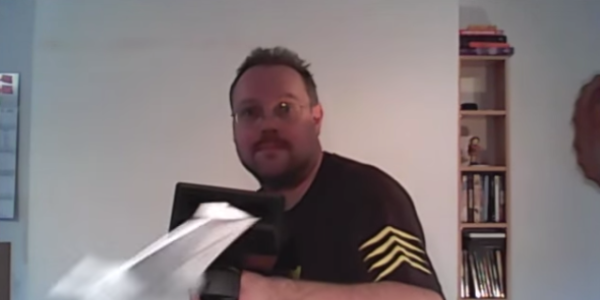 This 3D-Printed Gun Launches Paper Airplanes
Next Up: Editor's Pick