Horror, humor and romance meet in Horns, which finds Daniel Radcliffe playing Ignatius “Ig” Perrish, a man who starts growing devil horns after he’s accused of killing his girlfriend. Looking like hell (literally) has its perks, though — the horns cause people to confess their deepest and darkest thoughts, which helps Ig’s quest for the truth about his girlfriend’s murder.

TIME caught up with the 25-year-old Harry Potter alumnus to talk about the film — opening just in time for Halloween — the prosthetics, and his favorite of the seven deadly sins.

TIME: You must have spent a lot of time in hair and makeup with those horns.
Daniel Radcliffe: Maybe not as much as you’d think! Only 20 minutes or so every day — that was how long it took to put on.

Did they ever fall off during filming?
Sometimes. I would have a snake on me for a lot of the movie, and it would sometimes wrap itself around the horn and try and project itself off. It would start gripping it, and I’d be like, “Uh, I think you need to get this off me, it’s going to break.”

So you’re not controlling them with Parseltongue?
No, no. It’s funny — I don’t think about any of this stuff that can be equated to Potter, like the talking to snakes. Being so close to Potter for so long, I can’t even see references to it in other places.

As the film goes on, your character becomes more devil-like.
At one point I fell asleep — you get up quite early to have prosthetics. You sit in the chair and get covered in glue and it’s quite sticky. I had the full eye contacts in. I was just sitting by the heater and nodded off to sleep and woke up 15 minutes later with my chin to stuck my chest, melted slightly, and I couldn’t open my eyes. I was a particularly pathetic devil that day. I was rocking from side to side going, “Hello, is anyone there, can someone help me?”

What did you do to nail the American accent?
We are so suffused with American culture in England that you don’t have to go anywhere to find it. I grew up watching Friends and Frasier. I’ve also been told by quite a few people that my American accent sounds very similar to Chris Columbus, who directed the first two Potter films. That makes a lot of sense to me — he was the first American I spent any length of time around. I owe it all to him.

Are you excited that Friends is coming to Netflix?
Oh, is it? Is that a thing that’s happening? Very good!

Your character’s horns cause people to reveal their darkest thoughts aloud. Is everybody a monster deep down?
The takeaway from this movie is that everyone has a dark side, and it’s okay to acknowledge it — depending on how you act on it. The healthy thing to do isn’t to pretend that the dark stuff within you isn’t there. That’s the gift Ig’s power gives him in the film. He gives people permission to feel their darkest feelings and their darkest thoughts. There’s a certain relief in being told that it’s okay to have those thoughts. He is someone who I absolutely think is a good person whom you should be rooting for, but you can’t support everything he does. There are things he does in the movie that are awful. The film is about whether he’s going to give into that, or whether he’s going to find a way of redeeming himself.

I’d imagine being famous is sort of like having truth-extracting horns. Do fans confess strange things to you?
Sometimes people who grab you and pull you in close and tell you about some traumatic event in their life. “Thank you, your films really helped me.” I never mind hearing that, but I always want to be like, “Please don’t tell me I’m the only person you’re talking to about this.”

It’s Halloween. Are you into costumes?
Absolutely. I just generally go for quite standard superheroes like Batman, Spider-Man. I want people to be going around as Ig for Halloween next year. The horns and the leather jacket — I want that to be a Halloween favorite by this time next year.

Do you like horror films in general?
I was a real wimp growing up. There was a huge thing of kids telling each other to watch The Exorcist. They were like, “It’s dated, it’s not scary anymore.” I watched like two scenes and f-cking sh-t myself, it was terrifying. I can’t really get into gore. On the flipside, I like very shlocky B movies like the Sharknado films, any kind of Syfy original movie. Anything with “versus” in the title is a good bet for something I’ll enjoy.

In one flashback, your character almost dies in a dare. Have you ever done anything stupid on a dare?
I don’t know if it was a dare, but me and Rupert Grint used to play a game called corridor jousting. You take one of the empty water containers—that was your shield—and then you’d have the stick end of a mop handle. You’d just stand at opposite ends of the corridor and run at each other and try and deflect. I hurt him very badly at one point. We had to stop because he couldn’t get his breath back for a bit.

Now that you’ve played a pseudo-devil, what’s your favorite deadly sin?
Gluttony. I know I don’t look like it, but I can put food away. I tried Butterfingers for the first time yesterday.

How did that go?
They are maybe America’s best contribution to chocolate. I’m high on Butterfingers at the moment. 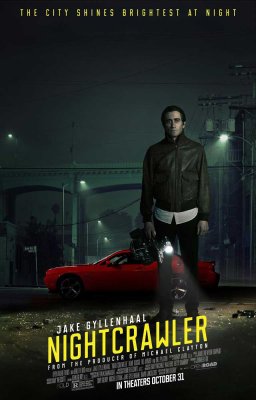 'Nightcrawler': Jake Gyllenhaal Wants to Take a Picture of You in Pain
Next Up: Editor's Pick